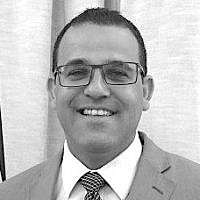 The Blogs
Udi Avivi
Apply for a Blog
Please note that the posts on The Blogs are contributed by third parties. The opinions, facts and any media content in them are presented solely by the authors, and neither The Times of Israel nor its partners assume any responsibility for them. Please contact us in case of abuse. In case of abuse,
Report this post.

Over the past few weeks, Hamas has shown its hostility to Israel by deliberately orchestrating violence on the border with Gaza.

Some media outlets have curiously glossed over essential elements of this story. This was epitomised in a Guardian editorial published on 23 April that declared: ‘The jury is still out as to how long Hamas’s patronage will allow the protests to remain peaceful.’

Considering that rioters have deliberately and consistently initiated violence, the word ‘peaceful’ cannot possibly be used to describe events on the Israel-Gaza border.

When facts are ignored in favour of a fictitious narrative in which ‘brutal’ Israel is cowing the people of Gaza ‘into submission’, truth is sacrificed upon the altar of storytelling.

80% of the Gazans confirmed to have been killed in clashes have already been identified as activists within terrorist organisations such as Hamas, Palestinian Islamic Jihad, and others.

This fact alone should cause the Guardian to reflect carefully on the true nature of these riots, rather than expressing solidarity with those whom it has inaccurately portrayed as protesting peacefully.

These Hamas rioters are trying to destroy the security fence, storm the border and come into Israel to murder our people. Israel’s soldiers are acting to protect civilians who live within a short walking distance from the fence with Gaza. It is unthinkable that any nation should allow its border to be breached, and its citizens to be placed in harm’s way.

Organised terrorists seek to justify these aggressive actions with hostile words. Hamas leader Yahya Sinwar said on 30 March that rioting ‘will continue until the border is erased’, adding on 6 April that if the people of Gaza are hungry, they ‘will eat the livers’ of the Israelis.

Hamas encourages Palestinians to place themselves in danger by offering financial incentives to those directly involved in clashes: $200 for the lightly injured, $500 for the severely injured, and $3000 for the families of so-called ‘martyrs’. While Hamas encourages violence, Israel seeks to avoid needless bloodshed, taking preventative measures such as dropping leaflets warning the civilian population of Gaza to stay away from the fence.

According to the Guardian, people were attempting to cross into Israel in order to ‘reach their ancestral homes.’  Yet as Gazans are living in their Palestinian homeland already, it is clear that these violent riots have a more sinister agenda.

In reality, rioters are attempting to implement Hamas’ ominous vision of the ‘right of return’. This would bring an end to the Jewish state by inundating Israel with five million people, most of them descendants of Palestinians born elsewhere.

For the Guardian and other media outlets to report recklessly about Israel’s defensive measures to protect our citizens, is to pour petrol on the flames of burning tyres. Responsible writers mindful of the power of their pens ought to bear this in mind.