Judaism tells us that the fifteenth day of the month of Av (this year: coming Thursday evening and Friday) is the happiest day of the Jewish calendar. Secular Israeli culture has branded it a Jewish Valentine’s Day of sorts. In any case, what a contrast with the saddest day that falls just 6 (or 5) days earlier!

Now, some in Christian circles (not all Christians) worry or look with great trepidation at coming Friday night because it will show the longest total lunar eclipse of the 21st Century, invisible in the US but observable in Israel (beginning Friday, from 8:14 PM in the evening until the last piece of the eclipse disappears at 2:28 AM on Saturday morning)! (It’s kind of funny to dub a total occultation through the verb “seeing” (though there’s plenty to see), but you know what’s meant.) And Christians learned from the rabbis that an eclipse is an ominous sign.

The latter see a solar eclipse as a warning to the enemies of the Jews. Yet, rather than to rejoice in that Divine anger, Jews should pray for their repentance. A lunar eclipse, on the other hand, would be a bad omen for the Jews, G-d’s Own lunatics (our calendar follows the moon).

In our times, people look for this heavenly abnormality in excitement, and Jews would want to make the same blessing over eclipses as over lightning and falling stars, but the Sages disagree. The Talmud doesn’t bring eclipses in the list of natural phenomena that warrant a blessing. Eclipses are bad signs and need prayer and repentance, not praise. (Though, there will be meteors too, so we might be able to bless anyway.)

However, many Christians are not really sad at terrible times coming! Not that they are pessimists or sadomasochists. Reportedly, they believe that when all hell will break loose – Heaven forbid – that will be the fulfillment of predictions regarding the End of Times. Redemption will come, benefiting only the good people, those who merited to survive the battle of Armageddon, G-d’s war to end the world. Their Book of Revelation tells of a final war – when and how it begins, who lives and who dies. And of course, they hope to be among the worthy ones.

They are a little wrong here, no offense. They need to learn something from the Jews. Don’t tell me that that would be unprecedented. The rabbis are very clear about this. True Prophecies must come true to the letter – on one condition. They must be nice foretellings. Heavenly Predictions that are stern do not need to come true at all! They are not forecasts but rather warning signs. And when they are heeded (soul-searching, repentance) they will not materialize to the slightest.

Therefore Jews never ever pray for and always against war. (In any war so many innocent people get hurt and killed. Any real peace is better than the smallest of wars.) Every human being is created in G-d’s image and hopefully deserves a good life and eternal life – there are no bad people. Only good people who do bad things – which they may correct. 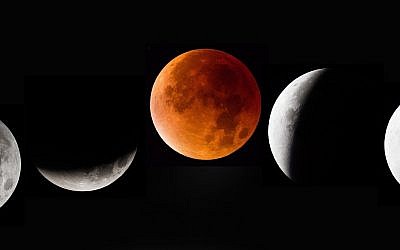 In any case, Jews are not too worried about a moon that seems extra large, red (the red can be both during the middle of a total eclipse and without eclipse, when a full moon is very low in the sky), blue or eclipsed. We need to repent because that is our main contribution to our own personal development and to evolution of intelligent life on earth.

But none of this will eclipse the happiest day of the year!  Happy T”u be’Av!

PS: I mentioned in my post of yesterday that the enormous stone that fell from the Kotel (though it’s one of its smaller blocks) was estimated to weigh a 100 kilogram but it has now been (re)moved and seems to actually weigh more like 200 kilogram.