On this day, in the aftermath of the Har Meron disaster (I use the word “disaster” because I think “tragedy” describes an unavoidable event – and this disaster was entirely avoidable if decisions that were taken had been taken without regard to extraneous political considerations), I must admit that I was racked with conflicting emotions.  At the same time that I felt pain and sadness, I also felt anger and outrage. I am aware of those who say that this is the time to mourn and to “show respect” for the grieving families and communities. but, if there is one thing I have learned in my almost 40 years in Israel, is that you must acknowledge your emotions in order to be true to yourself. And so, I embrace it all – the sadness of loss, the anger at the incompetence that must not be tolerated, and the disgust at the political exploitation both of the event and of the disaster that rocked our country for 48 hours.

Throughout the day I felt sadness. I couldn’t joke at work and I could hardly crack a smile. The disaster occupied my thoughts. I phoned my Haredi colleagues and work acquaintances to hear from them, make sure they were alright, and learn more about their feelings.

At the same time, I burned with anger at the religious and political leadership, who knowingly compromised the safety considerations for the Pilgrims – not only with regard to the possible contamination of COVID at such an event but also safety for the crowds of attendees – and all for political convenience and coalition mathematics. Do they really place less value on the hazards such a mass event poses to the participants when hundreds of thousands flock to a venue built to accommodate 15,000 at most than they do for their political survival, and their populist need to show their constituents how they succeeded in persuading the government not to restrict attendance to the Hilula of Lag Baomer?

I was astounded to the point of anger when I heard a report that the political echelon decided not to restrict numbers and show off that Israel has exited from the plague and returned to mass gatherings due to the vaccinations. Such hubris!

I found myself thinking how ironic it was that all military bases lowered the flag to half-mast in solidarity for a community that refuses to serve in the army, shuns soldiers from their community like lepers, and refuses to observe the sirens and mourning on Yom Hazikaron.

And I felt dirty – sullied – when I came to the realization that declaring a national day of mourning was more an act of obsequiousness towards the Haredi political and religious leadership than a sincere act of mourning. (Typical Bibi. It reminded me of the solemn military ceremony Bibi attended in Moscow over an empty coffin, while Zachariah Baumel’s remains z”l had been lying for a month in Abu Kabir). I felt cheapened that this day of mourning was not directed towards unifying the nation, but towards satisfying Rav Kanievsky, Deri, Gafni, et al – in a transparent act reminiscent of a political dowry.

And no, I didn’t feel ashamed for feeling all this. I embraced it because we are complex people with divisions and conflicting perspectives. Respect begets respect, and lack of respect begets the same. I’m not sure a tragedy will change that. One can mourn and call those responsible to account at the same time. 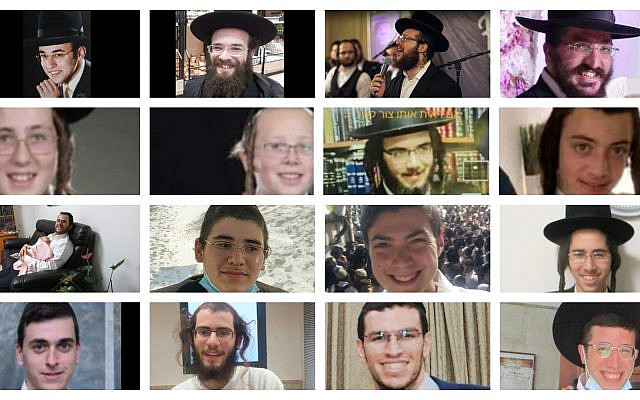 Everyone has a name and a face. Those who lost their lives in the Har Meron disaster. (Courtesy of timesofisrael).
About the Author
Paul Mirbach (PEM), made aliya from South Africa to kibbutz Tuval in 1982 with a garin of Habonim members. Together they built a new kibbutz transforming rocks and mud into a green oasis in the Gallilee. He served in the infantry during his army service, serving in both Lebanon and the West Bank, including on reserve duty during the first intifada. Paul still lives on Tuval with his wife and two sons.
Related Topics
Related Posts
Comments