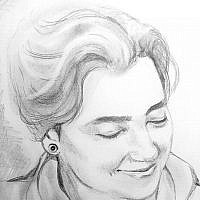 The Blogs
Hava Mendelle
Apply for a Blog
Advertisement
Please note that the posts on The Blogs are contributed by third parties. The opinions, facts and any media content in them are presented solely by the authors, and neither The Times of Israel nor its partners assume any responsibility for them. Please contact us in case of abuse. In case of abuse,
Report this post.

During the First Gulf War, we lived in Herzliya, a central city just north of Tel Aviv. As a child, I had no real concept of war, I only remember the bomb shelter drills in preparation for an attack and the memory of stress during these moments. I have one particular childhood memory that stands out amongst the rest — of riding my bike home from school through a street alley next to our building. Coming up and over the street curb I fell off my bike, hitting my head on the concrete pavement cutting it open. An Arab woman in a hijab next door came out to help me; she took me into her home and washed my head before I walked my bike home. The telling of this story often brings tears to my eyes. The woman that helped me may have been a mother or a wife that was simply helping a hurt child. She represents something innately human that can often be lost in war. Today, with a sensationalised 24-hour news cycle spouting prolific misinformation that causes confusion and anger, a propagandised social media system that divides more than unites, and the vast knowledge able to be acquired via the internet, more and more I see people attacking rather than understanding. More and more I see blame cast where it is unwarranted, and even more, I am forced to question what I know to be right.

In a long history of conflict, well before 1947 and the newly created State of Israel, the Jewish people have gone through extensive persecution not only in their homeland but throughout the world. This has included forbiddance to pray in their own temples, forced conversion, expulsion, demonization, and genocide. A brief reflection on just the regional history of the Levant tells us of the great empires and the Jewish exiles that took place before the fall of the Kingdom of Israel and Judah in 722 BCE and 586 BCE respectively. I would like to pay some historical attention to this point as it is so often thought that the land known as “Israel” did not exist prior to 1947.

There is significant archaeological evidence in stelae and ancient texts demonstrating a specific area and a people using the terms Israel in connection with Judaism. Moreover, evidence points to the development of Jerusalem into the ethnic, religious, and administrative centre of the Jews well into the First Temple period of the 8th century BCE. Throughout a turbulent history of several successive empires, the First and Second Jewish Temples were destroyed and Jerusalem city razed to the ground (70CE). It was then that the Judean Province was renamed by the Romans to Syria Palestina and Jerusalem to Aelia Capitolina. Even after these losses, the Jewish people canonised the Jewish Scriptures and made Hebrew the everyday language in order to combat the ensuing ethnic and political exile they faced. It was these cohesive entities that would shape later Jewish communities and create a nation without a homeland.

This ancient history is a brief introduction and I hope insight into Jewish thinking and identity. For if we speak of indigeneity, culture, and belonging, there is a clear historical, ancestral, and spiritual connection between Jews, Jerusalem, and Israel. We can go one step further and point to the continued presence of Jewish communities in these lands throughout many occupations including the Arab conquests of the 7th century CE. This is of current political importance for it was not until the fall of the Ottoman Empire in 1917 and the establishment of the British Mandate for Palestine, that Jews would once more have an opportunity to realise autonomy in their homeland nearly 2000 years later — an ideal characterised by much Jewish Diasporic thought and Zionism. This became a paramount ideal during the 19th and 20th centuries which saw the persecution of Eastern European Jewry, the Russian Pogroms of the 1800s, and the genocide of the Holocaust. This rising anti-Semitism contributed to Jewish immigration between 1882 to 1903 during the British Mandate period and continues to this day. The creation of a Jewish National Home by means of the 1947 United Nations’ Partition Plan was a concerted effort by the Jewish Agency, the Allied Powers, and the voting contribution of 72% of the UN General Assembly, allowing for the creation of a modern Jewish state buttressed by a successful Western democracy.

Alongside this, a proposed Arab – Palestinian State was recommended with the creation of a Special International Regime to manage Jerusalem. This was rejected by the neighbouring Arab nations of Egypt, Iran, Iraq, Lebanon, Syria, Saudi Arabia, Trans-Jordan, and Yemen who declared and lost against the nascent Israeli Defence Force in the War of Independence 1948. To look at this timeline makes me wonder about the strength of the Jewish people to fight again for their lives so shortly after the horrors of World War II. There have been many wars since. There have been many victories. Some of which are the strides in the economy, healthcare, technology and what we know as the “Start Up Nation”.

This is the history of Israel – a highly politicised life alongside normal everyday living. The results are a strong national identity that draws Jews young and old to visit, to immigrate, and to participate in its ongoing successes. During the last 70 years, Israel has been incredibly adept at absorbing people into its culture, encouraging Jewish and non-Jewish immigration, and building a minority into a majority. As I and many others have wondered and will wonder, what has unified the Jewish people and how did they build a state in light of past and present conflicts? How has the Jewish identity been maintained throughout the Diaspora? It is not religion alone that holds the Jewish people together for Israel has no enforced state religion, ceremonial practices are voluntary, and the majority of Jews are secular and receive no penalty or persecution for being so. In the words of Walther Rathenau, “There is no Temple…and no law that commands it be rebuilt”, “The houses of prayer called synagogues are simply schools or places of worship…no law requires their attendance”, and “Those who perform the religious rites are not priests but officers of the cult, or as their name implies, teachers of the congregation. They are appointed and dismissed. They have no authority to interpret the faith in any binding sense, let alone prescribe doctrine”.

In the Diaspora as well as in Israel, my identity has been put to the test more often than not and I am constantly questioning whether I am right.  This is the essence of my Jewish identity. And this is how I know I am right. For Judaism is not a dogmatic religion and being Jewish is not a steadfast resolve to stand to by Israel. It is a timeless connection to a people and a land that every Jew has the right and potential to question and interpret. There is however a tradition to learn and grow. To continue in the words of Rathenau, “…no educated man at present can be expected to remain faithful to the teachings of a philosopher of the past; just as little can a believing Jew be bound by the teachings and decisions of any religious authority no matter how ancient its prestige…the Jew may reject them all, invoking the old formula of spiritual freedom which declares: “My soul too was present at Sinai””. This quote reflects that every Jew has the potential to stand at Mount Sinai to receive the Ten Commandments and take responsibility for the evolution of Judaism and Israel in its current worldly context. To progress this evolution, we need to differentiate between our responsibility to ourselves as individuals and our responsibility to the community — something I believe many struggle with, especially in the context of the Israeli-Palestinian conflict.

There are divisions of opinion both within Israel and outside of it claiming that Israel should give more land for peace, a process that has proven to be ineffective and endangers the Israeli people. I believe in peace but never to the detriment of my myself or my heritage. I question how such a conclusion can be reached by many a Jew. It is a given that the Arabs of Palestine have suffered a great loss of identity. This vacuum allowed for the rise in terrorism and dogmatic extremism against Israel, the Jewish people, and the West. We can see a similar trend throughout the Middle-East where political vacuums have bred anti-Western sentiment and extremism. This was caused by the failure of Arab governments to unify and to reach peaceful and workable solutions for the betterment of their societies and is no reflection on Israel alone. The intersectional fighting between the Palestinian Authority and Hamas illustrates that agreements are bigger than simply casting blame on Israel. Jordan and Egypt refused Palestinian refugees and have strict border entry laws. Iran has funded Hamas and Hezbollah terrorist activity with a plan to eradicate Israel. It is not hard to understand that a united regional response with all surrounding Arab Nations would be a far more likely solution than laying a blanket blame on Israel. This will be the hardest thing for the Palestinian people to understand about their governments remembering that land for peace has been offered twelve times by Israel. Nowhere else in war or history has this been the case.

I cannot take responsibility for the plight of the Palestinian people or an identity that is based on the negative “othering” of the entire Jewish nation. I cannot solely focus on my empathy and humanity for the Palestinian people despite constant media spotlighting and international condemnation, ignoring the fact that it is not Israel’s sole responsibility and that there are many regional players. Mutual recognition from all sides and respect for all humanity is needed. Much like the woman that helped me as a child, she was able to see my humanity and I hers.

About the Author
Schooled in four different continents and experiencing various Jewish communities, Hava has an interest in politics and identity.
Comments