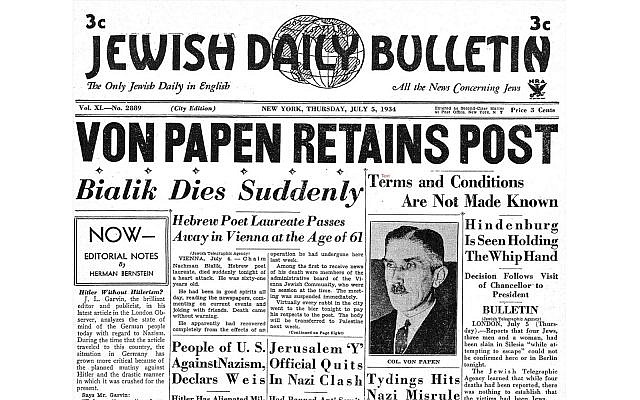 Back on July 5, 1934, for three cents you could buy a copy of the Jewish Daily Bulletin. It was an eight page, five-day-a-week newspaper and claimed to be “The Only Jewish Daily in English.” On that Thursday, which fell about half way between the October 1929 stock market crash and the September 1939 Nazi invasion of Poland, you would have read a sub-headline story, “Bialik Dies Suddenly.”

If one of our ancestors bought that paper, they would have read about the accomplishments of the Hebrew Poet Laureate Chaim Bialik. They would learn that Bialik interviewed survivors of the 1903 pogrom in Kishinev, Bessarabia and then wrote the powerful Yiddish poem titled In The City of Slaughter. His harsh condemnation of the Jew’s passivity in the face of the many murders and rapes sparked a transformation in how Jews would think of themselves. Vladimir Jabotinsky translated it into Russian, and it influenced future leaders like Menachem Begin and Jewish self-defense forces like the Haganah. It was one of the turning points in modern Jewish and Israeli history.

While the Bialik obituary rightfully deserved the premium front page, upper left placement, the rest of the paper becomes a time capsule well worth examining. The news snippets eerily foretold the coming European Holocaust and prophesied events beyond.  In the lower left hand corner of page six, a small factoid is printed: “15,200,000 Jews in the world.” It added, “of these 7,550,000 live in Central Europe.” Eleven years later, both numbers would be diminished by six million souls. And even today, we have not returned to that number.

The paper’s page-wide headline was “VON PAPEN RETAINS POST” and it fed into multiple stories about German President Von Hindenburg’s demise, and Adolph Hitler’s consolidation of power and ascent to be sole master of Germany. On page three, in a smaller, but still poignant reminder of the soon to be mechanized butchery, “Jew Killed by Pole Over Sixty Cents.” Also on page three, smack in the middle, is the heading, “Turks Give Reason For Expelling Jews.”

You also read,  “48 Graduate From Tel Aviv High School.” And, on page seven, in a roughly sketched illustration titled “Types of Chalutzim,” we see smiling, rugged men and women carrying tools to work the land that would, thirteen years later, be the State of Israel. (Chalutzim definition: people who immigrate to Israel to establish or join a settlement for accomplishing tasks, as clearing the land or planting trees, that are necessary to the future development of the country).

You would read how righteous Christians were reacting to the ominous events. Lady Kathleen Simon, wife of the British Foreign Minister advised Jews to “Follow in Footsteps of Herzl.” An official at the “Jerusalem ‘Y’ Quits In Nazi Clash.” The sub-text described the history of the German leader of the YMCA:  “He Banned Anti-Semitic Berlin Paper After Jews’ Objections.” Another article said, “Tydings Hits Misrule At Arlington” recounting how the Maryland Senator condemned Hitler’s leadership and Germany’s treatment of the Jews. Lastly, “Nazi Probers To Quiz Local Fascist Today” reported on a congressional Committee, led by John W. McCormick, to question local Nazis and Fascists.

The signs were there, and maybe a wiser, prescient readership and a more just, outraged, proactive world would have stopped the madness.

Would a reader be surprised by news about Israel’s border  skirmishes? No, there’s a same-old, same-old “fight card” of dusty battles trailing back across the millennia. How about threats of Israel’s annihilation? Nope, the hysterical shouts for Israel’s demise are a hackneyed display of bloodthirsty hyperbole. What about hypocritical United Nations proclamations skewering bad-guy Israel? Sorry, the UN’s jaw dropping double standards and paid-off obsessions are simply business-as-usual.

Closer to home and what might catch a wary reader’s eye would be a news snippet about the escalating rise of anti-Semitism in America. Hate is spewed from both the extreme Right and the extreme Left. The  murders in Pittsburgh, Poway, Monsey and violent demonstrations in Charlottesville fill the headlines.  The “Squads” trope-filled anti-Semitic rhetoric orated in the halls of Congress warrants thoughtful interest. The nastiness is bolder than ever before, and yet it hasn’t drawn sufficiently focused Congressional condemnation.  Would those outrages be the canary-in-the-coal mine signal? Maybe. This spectrum of animus harkens back to the  satirical 1960’s Tom Lehrer song National Brotherhood Week with the lyrics “…and everyone hates the Jews.”

But, there is a leading indicator of trouble ahead warranting our attention.

It is the increased reporting of anti-Semitic and anti-Israel incidences in K-12 public schools. These are occurring coast to coast, and even in the well healed private schools like New York City’s progressive, Ethical Culture, Fieldston School.  Reports from Amity High School in Connecticut, Boca Raton High School, Florida and Alameda, California include familiar invectives like … dirty, Satan, oven, kike, and  cleansing. These stories reference physical threats, vile jokes told, swastikas drawn, harassment and hate group speech. While most of the culprits are the students, the faculty too are involved. Educators and administrators sometimes question the facts of the Holocaust and spew untruths about Israel. For the students, a best guess is that their actions reflect the home environment, entertainment sources, and social media. Kids see and hear anti-Semitic rhetoric everywhere they turn. And what they learn in school about Jews is mostly (if not entirely) limited to Jews as victims of the Holocaust and/or Israel (the Jewish state) as the big bad oppressor-occupier-human rights violator.

Organizations like StandWithUs have come forward to face these challenges.  Since its inception eighteen years ago, StandWithUs has provided programming to pro-Israel students at universities and high schools, and curricula to middle schools that educate and engage.  By providing the tools, conferences, materials, social media, educational videos and missions to Israel, they educate students to combat antisemitism and help them build their own, life-long personal connection with Israel.  Facts are provided about Jewish continuity in the land of Israel, diversity, humanitarian aid and innovation that broaden the story beyond the slanted, ubiquitous anti-Israel narrative.

The next news flash that should catch our eye would come from the campus battleground. Youngsters, mostly Jewish, but also pro-Israel Christians must face, largely unprepared, the false narratives of BDS (Boycott, Divestment and Sanctions), apartheid walls, convoluted intersectionality reasoning, and an unrelenting media bias against Israel. Money from Arab countries has purchased and staffed Middle Eastern studies departments with anti-Israel and anti-Semitic faculty and staff. Those who are pro-Israel are often too intimidated to provide a counter narrative. Anti-Israel and anti-Semitic student groups are emboldened by these faculty to marginalize and drown out the voice of students who attempt to offer that counter narrative. It’s safe to say this all stems back to Edward Said’s Orientalism, which has led to the veneration of victimhood and demonization of power and success. These dynamics make it virtually impossible for pro-Israel members of the campus community to engage meaningfully.

Digging deeper, the analyst would find outrageous, tricked-up “Jewish” organizations like Jewish Voice For Peace, IfNotNow and J-Street combining with more obvious and virulent adversaries like CAIR (Council on American-Islamic Relations). Together, they field a well-funded, aggressive and strident anti-Israel and anti-Semitic presence on campuses around the country.

Readers should also be asking, “Will the hypocritical anti-Israel academics come to their senses?” At the best institutions, professors single out Israel, the lone pluralistic democracy in a nasty neighborhood, for interfering with academic freedom.

Teaching children in Jewish institutions about the miraculous story of modern Israel will also have to be part of the fight. When educators and families ignore the nobility of heritage and the righteousness of our cause, then they become the problem. We can’t allow differences between the Diaspora and Israel to be exaggerated or exploited by our adversaries. When lay and professional leadership misapply “politically correct” gibberish and focus on Israel’s relatively few faults, they undermine children’s identity and push them to become fearful shtetl Jews.

We have to hope that within our communities there are Jews and Christians who will continue the legacy of Chaim Bialik. He saw our fear and sense of helplessness as a disgrace. We have redeemed ourselves in the land of Israel and Bialik would  have rejoiced. In our own country, we have the means and organizations to fight anti-Semitism and anti-Israel bias. We have to press our Jewish and pro-Israel organizations to coordinate their efforts and allocate their resources to face today’s challenges. Organizations like StandWithUs, as well as CUFI (Christians United For Israel), ICEJ (International Christian Embassy Jerusalem), CAMERA (Committee for Accuracy in Middle East Reporting in America), Birthright Israel, Masa Israel, Maccabee Task Force and AIPAC (American Israel Public Affairs Committee) have the right mission statements. Now, they need our fullest support.

Will we lose another six million, not up in smoke, but to apathy, ignorance, and an unwillingness to engage the enemy, whatever its form?

About the Author
Alan Newman is a life-long supporter of the Jewish community and Israel. His commitment is evident with his hands-on approach and leadership positions at AIPAC, StandWithUs, Ben-Gurion University, Ethiopian National Project and Federation’s JCRC. He has traveled to Israel almost two dozen times and is an enthusiastic supporter of pro-Israel Christians including critical organizations like CUFI, ICEJ, USIEA and Genesis 123 Foundation. Alan’s compelling novel, GOOD HEART, published by Gefen Publishing House, is a multi-generational story about a Christian and Jewish family. He was a senior executive at Citigroup and holds two US Patents. He lives with his wife in West Palm Beach and enjoys time with his two sons and their families.
Comments