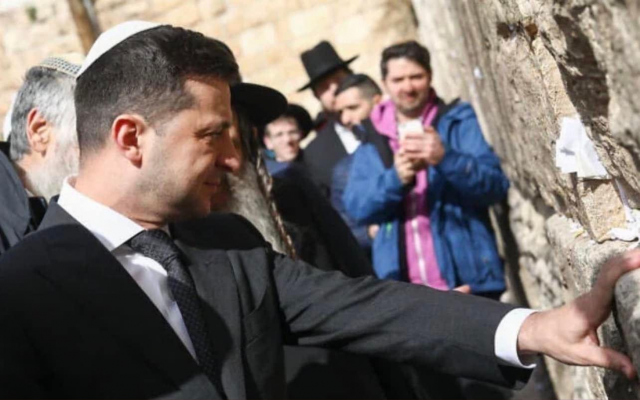 Volodymyr Zelensky is the hero we didn’t know we needed.

In a moment we never could have anticipated, worldwide Jewry is kvelling over an unlikely leader in an unlikely place.

It is no secret among Jews that Ukraine is traditional hostile territory.  It is a place our great-grandparents fled.  It is a place where they were murdered in unfathomable numbers by both Nazis and Ukrainians alike.  It is the site of Babi Yar, one of the bloodiest episodes in the annals of Jewish history during which, over the course of only two days, more than 33,000 of our family members were murdered and buried in a massive ravine.  It is a place many of my own generation left as children, their parents bravely striking out in a post-Cold War world for friendlier climes such as the U.S. or Israel that offered their Jewish-stamped offspring a less restricted future.

Now we watch in awe as everyday Ukrainians sing the praises of one of our own as he leads them in a David-versus-Goliath battle against Russia’s Bond-villain-come-to-life autocratic leader.

There is no question about it.  The past few years have been difficult for Jews the world over.  Our people have been harassed and beaten on the streets. They have been shot in synagogues.  They have been punched, stabbed, hit over the head with hammers, and hacked with machetes for the crime of walking the Earth a Jew. Seeing swastikas on the streets of America is starting to become old hat.

The stress of it all has taken its toll. Many have felt the escalation of anti-Semitism harkened the next attempt at genocide in a history littered with attempts to wipe Jews from the world.  The collective cortisol levels of Jews the world over have spiked.

Now, as that same world holds its breath watching the almost unimaginable rebirth of Cold War battle lines, redrawn in modernity with more active heat than they ever displayed in our lifetimes, who should emerge from the landscape of our past to stand for freedom, democracy, selflessness, and unfathomable bravery but a Jew.  One of our own.

How this came about is as mysterious to Jews as it probably is to Putin. He thought he could march over Ukraine like the Taliban swept across Afghanistan in a matter of days.  He saw a young, inexperienced Jewish boy somehow accidentally elected to highest office, and he pounced. After all, who would have anticipated the mettle Zelensky has shown?  And who would have thought his people would love him and stand behind him so fiercely?

And the rest of the world has followed suit, taking courage from his elemental style of leadership.  He did not only galvanize his own countrymen – and believe me, the concept of Jews and Ukrainians being bonded countrymen is difficult enough to process – but there can be little doubt that it impacted Western European leaders and President Biden to step up their provision of military and humanitarian aid as well as economic isolation of Russia.

No one anticipated that the 44-year-old Jewish comedian-turned-politician, a populist leader born of the same times that gave us Donald Trump and Boris Johnson, would transform into the pillar standing against the Kremlin, a new kind of Iron Wall shielding West from East.

He knows how to use social media to send messages of hope and resilience.  He knows how to speak to a generation connected through soundbites, mobile apps, and frank words.

Most importantly, though, he knows what happens when bullies are allowed to run roughshod over their neighbors.  He is the grandchild of a Holocaust survivor.  And who better understands the importance of standing firm in the face of naked, unprovoked aggression than the offspring of survivors?

Zelensky has made us all proud, Jew and non-Jew alike.  He has given us hope that old hatreds can be overcome.  He has shown the world the best we have to offer – shrewd, tough, honest, selfless.  The world’s knight in shining armor looks like us.  He has shown resolve to stay and fight, and the Ukrainian people – his people –  have rallied to his battle cry.  They have rallied to the battle cry of a Jew!  The cry of the Holocaust survivors!  The cry of Never Again!

I don’t know about you, but I needed this.