Sorry, for that title. It sounds like those tabloid headlines which you’re required (I believe by law) to read while waiting in the check-out line at the supermarket. Thank God, we don’t have those here in Israel.

Here’s what I meant: During the ’50s there seemed to be a conspiracy of silence about the Holocaust. It wasn’t discussed much in my Hebrew School. It got a mention at our model Seder, at Shfoch Hamaticha, Pour out Thy wrath, when we poured out a cup of wine for Eliyahu.

There were no community wide commemorations of Yom HaShoah. I later found out that there were get-togethers of survivors in my town, but I had no idea.

All of these memories came flooding back to me during my interview with Rabbi Irving Yitz Greenberg, when he described the resurgence of Orthodoxy in the ’60s, by explaining:

In terms of the changes in the ’60s, I believe that there were two major influences: Holocaust and the Chareidim who moved to America during the ’50s (We’ve already discussed this phenomenon in my posts The Yiddish are Coming, Parts I & II). The Shoah had not been discussed much since the end of the War and then came the capture of Eichmann. That event and the later public trial in Jerusalem brought the Holocaust to public attention.

This brought back a myriad of thoughts about the ’60s. First, that much of my knowledge of, and sensitivity to the Holocaust came from Rav Greenberg. Both my wife (at City College) and I (at YU) took his Holocaust course. Rav Greenberg shaped my thinking about this event and its continuing impact.

Plus, it reminded me of my anger in the early ’60s about the Shoah. This upset was first directed, oddly enough, at my mother OB”M.  We discussed everything, books, history, news. She told me about the Great Depression, WWII, Franklin Roosevelt (pareve), Eleanor Roosevelt (very positive), but, in 1961-2, I found this gaping hole in my knowledge bank, where the Holocaust should reside. I blamed her.

Then I was angry at my shul, my school, the newspapers, the world. It built slowly. First, on May 11, 1960, Adolf Eichmann (Who?) was captured in South America, by the Mossad and kidnapped back to Israel. Initially, we were impressed by the prowess of the Israelis. Then information started trickling out about this innocuous looking fellow who was the Engineer of the Holocaust.

It became a flood. When the trial began in Beit Ha’Am (The Gerard Behar Center in central Jerusalem) on April 11, 1961, there were 112 witnesses! Most were Holocaust survivors; many were telling their stories for the first time. The large venue allowed for many spectators. There were so many pictures and video clips of shell-shocked family members. Forget about OJ, Eichann was the trial of the century, the millennium.

It was clear that the prosecutor, Gideon Hausner, was prosecuting more than the man in the Glass Booth. He made it clear in his opening remarks:

It is not an individual that is in the dock at this historic trial and not the Nazi regime alone, but anti-Semitism throughout history.

A word about the Glass Box, I have an enduring memory of that impassive torso sitting there with earphones, seemingly oblivious to the proceedings. There were such emotional scenes of survivors and their families crying and embracing, but my dreams were haunted by the man in the Glass Booth. Thirty years later, I visited Kibbutz Lochamei HaGhettos, on the coast just north of Acco, with a group of my students. And there, sitting all alone, was the Glass Booth. My students couldn’t quite understand my fascination with that modest artifact. It was smaller than I remembered it from my TV screen. I didn’t sleep well that night.

So, Gideon Hausner had his bully pulpit to put anti-Semitism on trial. The police, who had conducted the investigation, had urged that he call only 30 witnesses. But Hausner was not to be denied his opportunity to answer every public trial and disputation and degradation our people have endured since Pharaoh, King of Egypt.

The trial lasted until August 14. What was supposed to be the climax of the proceedings, ended up being merely an afterthought. When Eichmann testified, the only thing revealed, according to Hannah Arendt, was the ‘banality of evil’. The greatest horror was his indifference. The one highlight of his interrogation was his quote, from 1945:

I will leap into my grave laughing because the feeling that I have five million human beings on my conscience is for me a source of extraordinary satisfaction.

The verdict was handed down on December 12. Eichmann was found guilty of 15 counts of crimes against humanity, war crimes, crimes against the Jews, Poles, Slovenes, Gypsies, and of membership in the SS, SD, and Gestapo. He was found innocent of personally killing anyone. He was sentenced to be hanged  three days later, December 15, 1961. He was executed a few minutes after midnight, June 1, 1962.

This 25-month episode was over. But the flood gates were opened. The secret of the Holocaust was revealed. Once it saw the light of day, it could never be hidden again.

The once verboten topic was now the talk of the town. Books, TV specials, movies, the Holocaust was center stage. Just out of curiosity, I checked a quite comprehensive bibliography of Holocaust material prepared by Ned Sherman, Allentown Holocaust Resource Center, to see when most of the books were written. In this randomly chosen list, 27 books were written before Eichmann was captured, 41 were written more than twenty years after he was executed, and 186 within the twenty-year period after his execution.

Hollywood, of course, also joined in. There were a ton of WW2 movies in the 40’s and 50’s, but not much about the Holocaust. That soon changed. The movie which wrenched my soul was Judgment at Nuremberg (1961, it premiered in Berlin, the day before Eichmann was sentenced). It had an amazing, all-star cast, but two performances shattered the hearts of the viewer. Judy Garland and Montgomery Clift portrayed survivors telling their stories publicly for the first time. It was the stuff of thespian greatness, and horror. The Holocaust had arrived. 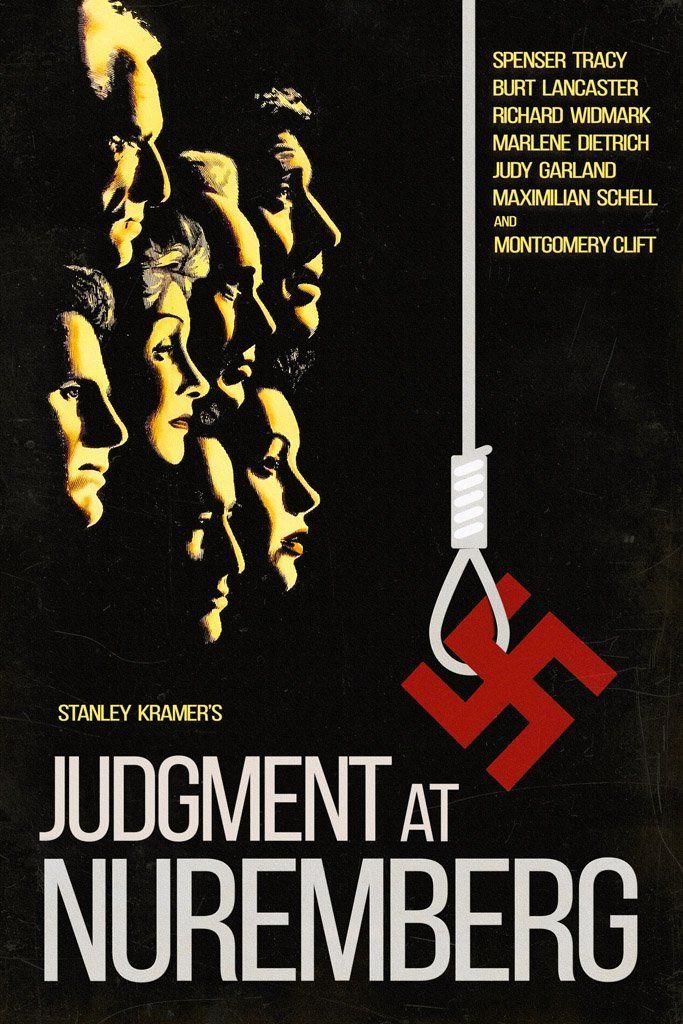