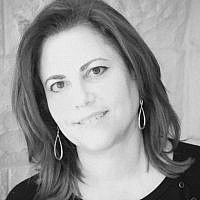 The Blogs
Tzippi Sha-ked
Apply for a Blog
Advertisement
Please note that the posts on The Blogs are contributed by third parties. The opinions, facts and any media content in them are presented solely by the authors, and neither The Times of Israel nor its partners assume any responsibility for them. Please contact us in case of abuse. In case of abuse,
Report this post.

We are absolutely horrified that some young Jews could do something so heinous. The nation condemns their sick behavior. This however remains an aberration, not a norm. Vigilante justice is extremely rare in Israel. The last time something like this happened was in 1994 when the mass murderer Baruch Goldstein took the law into his own hands.Like all societies, we have our extremists but we never let them control the majority. Unfortunately, the Muslim extremists control the silent majority which we hope want peace. A brutal murder (of Muhammed) such as this, is so rare that when something like this happens we go into shock. As a nation, we gathered after the murders of the three boys, Eyal, Naftali and Gilad Z”L and prayed and comforted one another. We did not take to the streets rioting. Then the shock of all shocks, the unthinkable happened and it was from our side. I can only say that the nation of Israel is not handing out candies in celebration, we are not raising three fingers in a sick victory signal…we have not incited our children in our textbooks to hate Muslims and to take the law into their own hands. Rather, we are horrified and are acting quickly to arrest and prosecute these mad young people and quell the violence. In contradistinction to the actions of the Palestinian Authority, Israel will not name a street, a square or a village after the perpetrators, the mothers will not be celebrating in their children’s honor, the families will not be awarded terrorist stipends and the perpetrators will be tried accordingly under the democratic process. There will be intense months of soul searching as we try to process this act. This has been the most horrific month here in Israel and I fear that we are heading into a very trying period. Today a couple of Muslims from Hebron visited the Fraenkel families, if we could guarantee our safety, many Jews would go and comfort this Muslim family in turn. May peace reign over Jerusalem in our time.

About the Author
Tzippi Sha-ked grew up in California and moved with her husband and children to Israel in 2004. Tzippi has a background in television and is one of the authors of The Jews of South Africa: What Future? She has an MA in Leadership and Administration and is currently completing two more in Creative Writing and Marriage and Family Counseling. When she's not working on a new project, Tzippi is busy building bridges between Jews of all backgrounds and people of other faiths.
Related Topics
Related Posts
Comments