“Excited for a wknd of a leadership program with Young Professionals in the Pocono Mountains. If you want to see an Israeli talk about Israel, ski, fall and bump into a tree — come join” 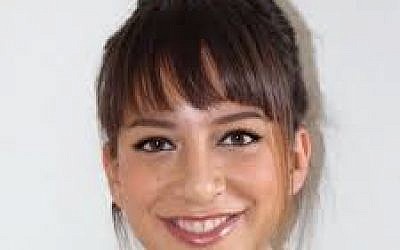 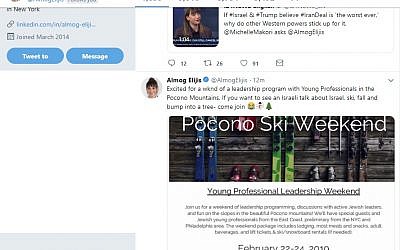 What does an East Coast young professionals’ ski trip have to do with a challenge to young professionals’ perceptions of Israel? And how are young adults influenced by criticism of organizations like IfNotNow, the progressive group that some have claimed has “hijacked” Birthright?

The experience of one Jewish young professional is the example of young Jews who look to understand their personal connections to their heritage. Kristine Hyland, involved in synagogue education in DC, shared her angst recently in the pages of the Forward over “IfNotNow.” She related in detail how Birthright participants in her December 2018 trip acted out their roles as trained provocateurs to disrupt the program with their anti-Israel agenda. Please see: “What Really Happened During The Birthright Walkouts”

Jewish young professionals (YP’s) are increasingly confronted and influenced by the political agenda of the “progressive” movement which sees Israel as an occupying, “apartheid” and illegitimate state. The accusations have one purpose, not to create balance and understanding, but to engender hate and ultimately lead to the replacement of Israel with a new Arab country of Palestine, “from the River to the Sea.” The falsehoods of the progressive dogma uses the narrative of Palestinian victimhood to make victims of young adults who come to Birthright to enjoy making new friends and learn about Israel.

Impressionable American young adults see new “role models” in dynamic young Congresswomen carrying the same progressive agenda. They are encouraged to follow the standard bearers of MN Rep. Ilhan Omar’s in her attempts to diminish the American-Israel relationship. She tweeted out AIPAC as “buying” politicians, and making the comparison to the NRA. The same day NY Rep. Alexandria Ocasio-Cortez tweeted a political love connection to Britain’s Labor head Jeremy Corbyn. The British Jewish community is terrified. They have identified Corbyn as an anti-Semite. Who would know better? They dread that Corbyn could become their Prime Minister. The specter of anti-Semitism coming into vogue in Europe and America is chilling.

Perhaps the model of a response can be found in a enterprise that has been working to answer the question: “Is there Life after Hillel … and Birthright?” A project begun in 1986 has been engaging tens of thousands of Jewish young adults and introducing them to authentic voices from Israel and America. Young Jewish Leadership Concepts (YJLC), partnering with other organizations with a strong Israel agenda, like AEPI, Masa, StandWithUs, Hasbara Fellowships, and others, has been working to help post college-age young adults digest the complexities of the America-Israel relationship, and guide them in roles of leadership in the American Jewish community.

February 11, 2019 was one of a series of “Critical Issues” YJLC Conference Calls. It was an Israel Update call with Michael Alexander, Director of Regions for the Consulate General of Israel in New York. YP’s from New York, Philadelphia, and even Sioux Falls, South Dakota, listened and discussed issues with Alexander. Topics of US relations with Israel, economic collaboration and development, the multiple programs in the US to understand Israel, working towards bi-partisan support from Americans, rising anti-Semitism in Europe, and the fears of it coming to our shores. As we have seen, unfortunately trying to gain acceptance in the halls of Congress.

A previous national “Critical Issues” conference call was arranged days after Israel’s 70th Birthday, and the US Embassy move to Jerusalem. With the concurrent riots in Gaza, charges were made of Israel violating international law. YJLC pegged guest speaker Professor Amos Guiora, International Law and Counter Terrorism expert, and former JAG for the IDF in the Gaza District. Guiora spoke late night US time, while he was at home 5am Israeli time, to YP’s in New York, NJ, Philly, Atlanta, and Chicago.

This weekend, February 22-24, NY Consulate Spokesperson Almog Elijis will not only be skiing, and “bumping into trees” in the Poconos. In the effort to give YP’s a personal and authentic understanding of Israel and the complexities of the Middle East and the US -Israel relationship, Elijis is bringing her friend Shay Bialik, Advisor for Economic & Social Affairs, Permanent Mission of Israel to the UN.

Michael Alexander is the third YP working for Israel coming to the Poconos, along with a score of other young adults who will be sharing a love for Israel and desire to learn more from each other. As an organizer of a previous Pocono Ski trip, Alexander is familiar with the interactional goals and informal methodology of YJLC.

Years of experience in the project also come from PocoSki30 Co-Chairs, Steve Silberman, NYC, who recently served as Masa Partnership Director, and in Philadelphia, Ben Goodstein, a leadership training and travel programs professional.

Whether it is skiing in the winter, or rafting in the summer with amazing Israeli/Jewish community VIP’s, the project celebrating its 30th annual ski trip looks to give YP’s a unique experience of fun, peer support, and guidance in leadership for the Jewish community.

Late coming signups will be welcome, as they might meet, Kristine, the young Jewish activist who shared her angst about IfNotNow in the Forward.

Young Jewish Leadership Concepts (YJLC), is a non-profit young professionals network, which has been bringing Jewish young adults together since 1986.

About the Author
Lou Balcher served from 2004 - 2013 as Director of Academic Affairs to Consulate General of Israel to the Mid-Atlantic Region. He also served as Education Director for Congregation Tifereth Israel in Bensalem, PA, and as administrator and teacher for Gratz College's Jewish Community High School. He is a former Membership Director for the Philadelphia and Cincinnati regions of B'nai B'rith International. For three and a half decades, he has coordinated post-college young leadership programs for Young Jewish Leadership Concepts. From 2014 - Spring 2021 he consulted as National Director of the American Friends of the Kaplan Medical Center, Rehovot, Israel which serves more than one million Israeli citizens. In the Spring of 2021 Balcher and a team of national leaders inaugurated the American Foundation Creating Leadership for Israel (AFCLI) - "the newest voice for Americans for Israel."
Comments