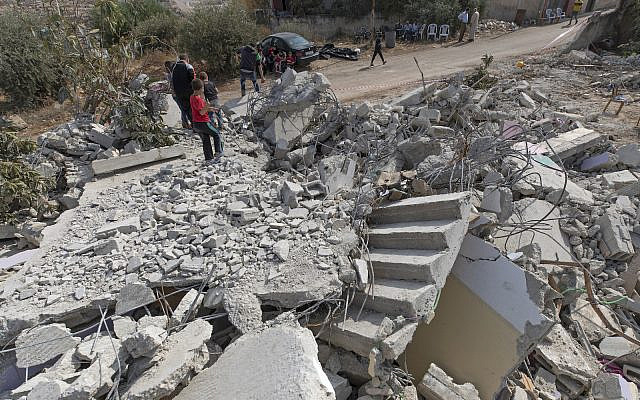 Palestinian children play on top of the demolished house of Khalil Dweikat, 46, at the West Bank village of Rojeeb, east of Nablus, Monday, Nov. 2, 2020. The Israeli military said Monday its troops demolished the West Bank home of a Palestinian accused of killing an Israeli in a stabbing attack earlier this year. (AP Photo/Nasser Nasser)

A few days ago, I was struck by the following headline on the front page of Ha’aretz: Legal Ground Laid for Mass Demolitions of West Bank Housing. After reading this headline and the article, I thought to myself: What if this headline had been in reverse? What if there was a headline that said: “Jewish homes slated for demolition in Palestine” or “Jewish homes slated for demolition in Georgia due to Congressman Greene’s latest incitement”?

You know the answer: the Jewish communities in the USA, Israel and around the world would be raising their voices against this! All the “defense organizations” and the Conference of Presidents of Mostly Minor Organizations would be issuing press releases and condemnations!

But in the case of home demolitions against innocent Palestinians in East Jerusalem and the West Bank, you don’t hear a peep of protest. Nothing. Nada. Except from human rights organizations in Israel. Mainstream Israel just ignores it, like it ignores so many other daily injustices that are perpetrated against Palestinians.

The policy of demolishing Palestinian homes unfairly and unethically has been going on for a long time. It is a disgraceful and inhumane policy, which harms innocent Palestinians on a regular basis, incites hatred and humiliation among them and others in Israel and abroad with regard to the occupation, and causes Israel to have a bad reputation in the world. Israel, which purports to be a Jewish and democratic country, and which used to strive to be a beacon of morality and justice to the world, is clearly acting immorally in this case, without real justification. The state of Israel needs to rethink how it deals with this issue.

The problem is not that complicated to understand. The main issue is that it is virtually impossible for Palestinians to get permits to build homes in Jerusalem or in the West Bank, especially in area C, which is under full Israeli control, according to the Oslo Accords. This is the main reason that the policy of home demolitions is so wrong and unfair. But there are other reasons.

According to sources at the human rights NGO Bimkom Planners for Planning Rights, the problem is also related to inadequate planning as well as to difficulties that the Palestinians have in “proving” ownership of their homes to the Israeli authorities. When a Palestinian family builds without a permit—since they need a place to live, which is a basic human right—suddenly the letter of the law is enforced. When settlers do so, the law is bendable.

Palestinians in East Jerusalem and the West Bank live in constant fear of demolition of their homes. Moreover, all too often, when the demolitions occur, they are carried out like a military operation in the middle of the night or at dawn, with no notice to the people who live in the home, and often with a wanton aggression. Sometimes the people who live there are given 5 minutes to grab their belongings and leave! It is a horrible scene!

Furthermore, actual demolitions—and even demolition orders –are largely arbitrary. This is because this unfortunate policy of home demolitions is used mostly as a scare tactic or as a warning to others. There is no real policy to demolish all the “illegal” –or unrecognized or unapproved –homes that are built by Palestinians, especially in East Jerusalem, of which there are many thousands, which are built so that Palestinian families can simply have a home to live in.

According to Aviv Tatarsky of the NGO Ir Ammim, which follows this issue closely:

Israel has been demolishing about 50 housing units per year in East Jerusalem. During the last 5 years the number has jumped to almost 100 per year. Last year, 2020, was the worst year ever with 144 housing units demolished. The reason is that Israel has adopted a more aggressive policy against Palestinians by allocating more funds for units carrying out demolitions and by changing the planning law so that fines against construction without a permit become unbearable and families are forced to submit to having their homes demolished.

I would like to pose these questions to readers of this post: how would you feel if your home was demolished and you were all of a sudden homeless? What would you think about the government and the legal authorities in your country—or in any other country– who sanction this, especially when it was virtually impossible for you to get a building permit to building a home? What would it feel like to be in exile in your own land, with no roof over your head, for you and your children?

The policy of home demolitions must stop. It is simply wrong. The city of Jerusalem should be providing planning and permission to the Palestinian population to build new homes, instead of choking the population so that it cannot expand within the city limits.

Moreover, it is deeply immoral and unfair. It discriminates in very blatant ways against Palestinians, especially in Jerusalem, which should be a city of peace and tolerance, not one of discrimination and destructiveness. This is not the way a Jewish state should act towards the minorities within its midst and under its control.

When a stranger (member of a minority) resides with you in your land, you shall not wrong him.  The stranger who resides with you shall be to you as one of your citizens; you shall love him as yourself, for you were strangers in the land of Egypt: I the Lord am your God. (from the “Holiness Code”, Leviticus 19:33-34)