The historic trip of Iranian judoka “Saeid Mollaei” to Israel and to attend the Israeli “Grand Slam” and the warm welcome he received from the Jewish country has caused considerable anger among Iran’s dictatorial official’s regime. Mollaei trained with Israel’s national judo team at his request just hours after his arrival in Israel. 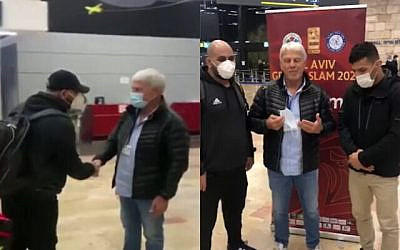 He received a warm reception, and Israeli judoka Sagi Moki addressed him as “Welcome, brother”. 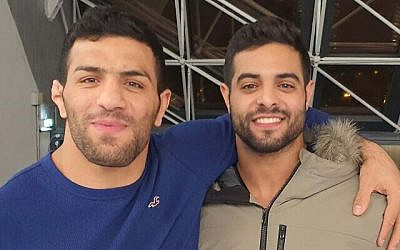 It is worth mentioning; Saeid Mollaei, who lives and plays sports in Germany with his athlete wife, Dezakat Azizova (a citizen of the Republic of Azerbaijan), has participated in the World Grand Slam Championships in Tel Aviv on behalf of Mongolia at the request of the Mongolian President.

The Judo Federation of the Islamic Republic of Iran, which is under international suspension and is not allowed to participate in any official international stages due to anti-Semitic behaviour and attempts to spread hatred, strongly condemned Mollaei’s action. And about Mollaei’s peaceful and humane behaviour, they (Iranian officials) used the phrase “stain” in this regard.

After being forced to defeat his opponent at the Tokyo World Championships to avoid confrontation with an Israeli judoka and by order of the Islamic Republic’s sports authorities, Saeid Mollaei returned to Iran and took the opportunity to fight the Islamic Republic of Iran. 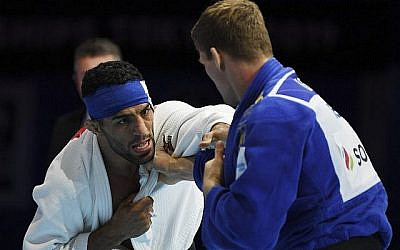 In this picture taken on August 28, 2019, Iran’s Saeid Mollaei (in white) fights against Belgium’s Matthias Casse during the semifinal of the men’s under-81kg category during the 2019 Judo World Championships, in Tokyo, Japan. (Charly TRIBALLEAU AFP)

When Mollaei revolted against the decisions of the government of the Islamic Republic and tested them in the international courts against them due to their anti-Semitic choices, the regime tried to deceive Mollaei and bring him back to Iran by spreading the net of deception and making false promises. Salehi Amiri, the former chairman of the National Olympic Committee of Iran, who is one of the key decision-makers in the “Deception for Not Facing Iranian and Israeli Athletes” Committee, said to Mollaei while he was planning to claim against the Islamic Republic at the World Sports Court. He (Salehi) stated: “The country’s arms are open to all the children of Iran, and Mollaei can return and continue his activities whenever he wants inside the country.”

Salehi Amiri, who has a history of working in the security agency, wanted to deceive Mollaei (as the regime did for ruhollah zam), and by bringing him to Iran, to introduce him to the judiciary for trial.

However, Mollaei was not intimidated by the deceptive promises of the Islamic Republic and continued his professional activity with great perseverance, and incidentally, he was supported by the international community.

He became the standard-bearer of peace and a heroic character in the global sport after he was forced not to race with an Israeli opponent, but he pursued a different path from the evil Iranian regime.

The response to this action was unexpected in the world and among sports friends. On social media, this event was described as a great and clear message to the world and how far sports and competition fields can push the boundaries of hatred and bring humans together.

Arash Miresmaeili, President of the Judo Federation of the Islamic Republic of Iran, stated in a significant embarrassment and considered the suspension of Iranian judo from world competitions for facing Israeli opponents as an honour and dignity for Iran, and he ignored the international rules in sports.

However, this kind of politicism in sports is not acceptable from the international community’s point of view because sports and competition are a place for the promotion of human values, ​​but not a place for strengthening hatred and racism.

Iran’s judo sports officials’ statements against Mollaei came as Arash Miresmaeili, President of Iran’s suspended Judo Federation, had earlier and during the Court of Sport’s in Switzerland, stated in a deceptive attempt to mislead the court and falsely claimed that Mollaei had lost the pre-confrontational rivalry with an Israeli opponent by his own will.

This contradiction has continued, and while Miresmaeili claims that 90,000 Iranian judokas have been unemployed because of the international suspension of the Iranian Federation, but elsewhere, he stated it as a “major victory”.

The fact is that the Islamic Republic’s regime is trying to entice athletes by promising money and facilities. Mehdi Rostampour, a sports journalist outside Iran, said: “Even Miresmaeili himself, who now speaks against Saeid Mollaei in Olympic Athens, said that when he was ordered not to compete with an Israeli opponent by the government, he could not sleep until next morning and cried and cried that when he could win, why shouldn’t he compete with his opponent?

Mir Esmaeili was eventually promoted by the promise of money and the presidency of judo, and in order to protect his interests, he had to stand with the Islamic Republic to fulfil the mission of hate speech against peace.

It seems that in Iran, most people love Israel, and even the government’s pressure cannot diminish the interest of the two nations, that people in the streets and public centres of Iran are mainly trying not to walk on the Israeli flag that the regime deliberately used to trample it on the floor, and it can be seen in the video clips which comes from Iran.

Saeid Mollaei’s peaceful behaviour and going to Israel to participate in sports competitions, although it is considered shameful by the Islamic government, is a humane and taboo-breaking behaviour in the eyes of the world public opinion, which deserves admiration.

Undoubtedly, the people in the world are in favour of peace and tranquillity, and the reactions from Mollaei’s visit to Israel on social media has shown that the world’s public opinion see the Iranian regime as a stain that is trying to spread hatred in different areas such as sport, politic, culture and international relations. As a result of Saeid Mollaei’s presence in Israel, it is a new message for the peace process, a message that emphasizes that the Iranian nation, unlike the regime, love Israel and its people.