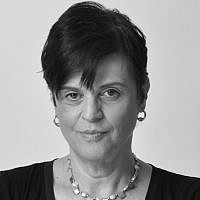 The Blogs
Shulamit Binah
Apply for a Blog
Please note that the posts on The Blogs are contributed by third parties. The opinions, facts and any media content in them are presented solely by the authors, and neither The Times of Israel nor its partners assume any responsibility for them. Please contact us in case of abuse. In case of abuse,
Report this post. 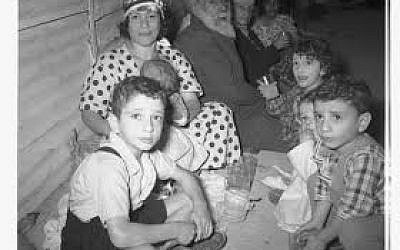 On the way to Israel (JDC) 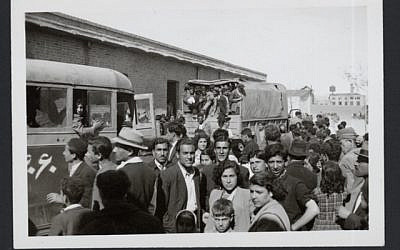 Iraqi Jews in Tehran, before boarding for Israel (JDC)

The flight of the Babylonian (Iraqi Jewish) community from Iraq to Israel was a formidable endeavor, delivering a whole community from the claws of angry mobs and vengeful authorities. No doubt, the daring devotion of young emissaries, like Shlomo Hillel and Mordechai Ben-Porat, operating on behalf of the Mossad for Aliya, made it possible just in time. However, it was the brotherly Jewish hand from across the ocean that had discreetly provided for the financial, political, and diplomatic “must-haves” that was crucial for the task.

On March 1950, Iraqi Interior Minister Saleh Jaber submitted to parliament a resolution renouncing Iraqi citizenship from all Jews who apply for exit visas. This legislation opened the gates for a massive Jewish exodus in operation “Ezra and Nehemiah” that literally ended the most ancient Jewish diaspora. A year later, another law froze all remaining Jewish property and assets.

From May 1948 until late 1951, some 120,000 out of the 135,000 members of the Babylonian community were forced out of Iraq. They left behind significant property including synagogues, educational institutions, and many industries and businesses. The total value of Jewish properties, both private and communal was estimated at hundreds of millions of dollars. They also left behind their rich cultural and intellectual achievements, as well as Muslim and Kurdish friends and partners and their long heritage and self-esteem as Jewish citizens of Iraq.

Nearly the entire community had to leave – rabbis and lay-leaders, professionals, businessmen, doctors, intellectuals, rich and poor – they had to leave in an unimaginable human flood. At the same time, Jewish communities in eastern Europe had to evacuate Soviet-sphere countries (like Poland, Romania, or Hungary) that a Jewish Agency report defined as “Countries of Now or Never Emigration” before the exit gates would shut down.   Once in Israel, this sophisticated and urban community was met with years of hardship, but it emerged as a successful and well-organized society, contributing to the state and prospering with it in all spheres of life.

The awareness of Iraqi Jews that it was perhaps the time to leave Iraq had grown with the increasing government harassment and arrests following the UN resolution dividing Mandatory Palestine into Jewish and Arab states. After the defeat of Arab forces in the 1948 war, including the Iraqi Expeditionary Force, the wrath and frustration of the Iraqi “street” targeted the Jews even when it originated from an unrelated economic crisis. The government issued more orders and writs depriving Jews of financial and medical services, firing Jewish civil servants, closing their pharmacies, and prosecuting Jewish businessmen. For example,  Shafiq Adas, a wealthy merchant from Basra, was sentenced and hanged in September 1948;  In 1951 Shalom Saleh and Yosef Basri were both convicted of Zionist affiliation and (falsely) also of terrorist activities and hanged, despite Israeli and American Jewish protests.

Yet documents found in the archives of the Joint Distribution Committee (JDC) and the American Jewish Committee (AJC) reveal the crucial role played by American Jewish Organizations. They facilitated the operation through diplomacy, political connections, and media attention as well as financial support and care to Iraqi Jewish refugees. The AJC led the diplomatic effort vis-à-vis the State Department, the United Nations, and the American media. They were well aware of the furious reactions of the Arab world to the Declaration of Independence of the state of Israel and defined the local Jews as enemies, spies, and agents provocateurs.

The AJC worked in accordance with the newly formed Israeli state institution. Led by Foreign minister Moshe Sharett and through the Israeli Embassy in Washington and the Mission to the UN in New York, Israel was trying to utilize the ongoing US-UK negotiations over the issue of providing technical and military assistance to Iraq, which, seemingly, could provide a useful inroad into the Baghdad government.

There was a lot of humanitarian work to be done in Iran as well. Since Iraq did not allow American NGOs’ presence within its borders, the JDC was operating from Iran using its long experience with displaced refugees.  Until the beginning of direct flights from Baghdad in the “Ezra and Nehemiah” operation, Iraqi Jews fled illegally to Iran, taking the risk of arrests, abuse, and even murder. In most cases, they bribed their way through Kurdistan and arrived to Iran practically penniless.

The JDC had already been busy assisting some 8,000 Iraqi Jews who fled illegally to Iran; they helped to secure Iranian permits; they addressed local animosities and arranged the Israel-bound flights. JDC set a “transit camp” in the old Jewish cemetery, called ironically Beheshti (Eden, in Farsi). Stanley Abramowitch, the JDC Iran country director, described a grim picture of crowded communities with health and sanitation issues and stressed the urgent need for funds and relief. In late 1949 through January 1950, he sent detailed requests for funding beyond the ongoing expenditure. Those additional funds were to be earmarked for accommodation, basic equipment such as beds and blankets, dispensary water installations, and stoves in preparation for the harsh Iranian winter.

Even prior to the establishment of the State of Israel, in April 1947, The Mossad for “Aliya bet” initiated the first airlift from Baghdad. Two C-46 twin-engine transport aircrafts, flown by non-Jewish American World War 2 pilots: Leo Wessenberg and co-pilot Mike (last name unknown). Undercover, Shlomo Hillel arranged for direct flights from Baghdad to Israel. It is noteworthy that such an operation would still be illegal in both Iraq and British-mandated Palestine.  However, the number of Jews flown this way was only about 100. Operation Michaelberg, considered by Israeli Air Force as the first covert operation, indicated that this risky operation could not transport mass immigration.

From April 1950 to July 1951, a series of explosions took place in Baghdad, mostly in Jewish facilities but also in the American Information Bureau. Iraqi authorities blamed Jewish and Zionist terrorists for the attacks, allegedly to expedite Jewish registration for Aliya. Tensions rose within the community, fed by a feeling of vulnerability and helplessness, combined with frustration over the loss of property and the day-to-day abuse in the streets.

The State Department and the US Embassy in Baghdad followed the tense situation. They welcomed Prime Minister Nuri Said call encouraging the exit of Jews, but warned against government harassments during the process.  Once direct flights from Baghdad via Cyprus to Israel were allowed, the Mossad for Aliya, Mordechai Ben Porat devised a brilliant and complex operation for the airborne exodus.  The organizers were Shlomo Hillel, community leader Shemtov and Ronni Barnett, a British Jewish aviation personality, who was instrumental in connecting the ends needed for the airlift. They were supported by Tawfiq al-Suweidi (who served as PM from February to September 1950) who, as a graduate of the Jewish Israelite Universelle School in Baghdad, was sympathetic to the Jews. The newly created airline was named “Near East Transport”. It was a subsidiary of Near East Air Overseas and was headed by James Wooten, a former president of Alaska Air, which, in partnership with the nascent El-Al Israeli airlines, took part in the Magic Carpet Operation, flying Jews from Yemen to Israel.

The Iraqi government allowed only a limited period for Jews to leave the country. This limitation required a large infuse of money to carry out the massive airlift in a short span. Yet secrecy was no longer needed. Furthermore, the May 19, 1950 landing in Nicosia of a Skymaster departing Baghdad on its way to Tel Aviv stirred a commotion of coverage by the excited media.

Dr. Joseph J. Schwartz, the Director-General of the JDC overseas operations, held a press conference in Paris on May 26, announcing the first week of the airlift from Baghdad to Israel. He stressed that “the vast multi-million dollar funds required for both the evacuation and the reception of the Iraqi Jews must come primarily from the Jews of the United States”  through the United Jewish Appeal.

Transportation alone was expected to cost the JDC $2,500,000, and the Jewish Agency would require many times this amount for welcome, absorption, and Integration purposes. He stressed the historical mission of the Jewish people ”The new air exodus from Iraq is reminiscent of the last great Jewish exodus from Iraq, then Babylon, which took place almost 2,500 years ago”.

In March 1951, 70 days before the final date, the Iraqi government permitted exit of Jews, the Director-General of Israel’s Finance Ministry appealed to the UJA for an urgent transfer of 5 million dollars in cash. The money was needed to provide for the flights to Israel of some 70,000 Jews already registered to leave Iraq after renouncing heir Iraqi citizenship, as was required by authorities in Baghdad.  Consequently, Jacob Blaustein, president of the AJC raised in May 1951 with the Department of State the issue of frozen assets of Iraqi Jews.[

In summary, operation “Ezra and Nehemiah” was a long shot, complicated and strewn with threats, during which the abuse and harassment of Iraqi Jews continued. Their millennia-accumulated properties and assets were forfeited or frozen and their means of livelihood thus faded. The rescue operations testify for the devotion and dedication of the young, local Jewish leaders and the Mossad for Aliya emissaries. The role of the American Jewish Community was not highlighted at the time in order not to jeopardize other missions elsewhere. However, we should remember that it could not have materialized without the massive, brotherly recruitment of the American Jewish communities in supporting this huge operation.

About the Author
An expert in Middle Eastern affairs, Shulamit Binah’s book, UNITED STATES – IRAQ BILATERAL RELATIONS, Confusion and Misperception 1967 to 1979, has been published by Valentine-Mitchell (London 2018). Dr. Binah retired from government service after a full career in analysis and evaluation. She currently resides in Kfar Sava, Israel following a four-year stint in Copenhagen, where she joined her husband who served as Israel’s ambassador to Denmark.
Related Topics
Related Posts
Comments