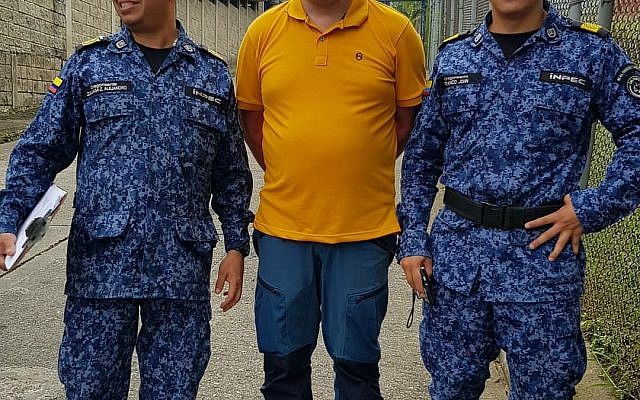 Just before entering the prison. (Courtesy)

About a year ago, I entered patio 7 at the Itagui prison in Medellìn, Colombia. I was the first westerner to ever entering that place. This is the short story.

After a lot of hassle, questioning, making friends with the local authorities (Alcaldia de Medellìn) and a few bribes – I managed to enter the most dangerous patio in any Colombian prison. The term danger is defined by the number of murders, violence and running at over-capacity.

We were driven there by the Alcaldia, when exiting the car I realized we were cornered. I was standing next to the abandoned outside reception desk that was peppered with bullet holes. An agonizing 30 minutes passed. Another 45 minutes. Soon they said. Wait a little. Soon. And finally after waiting in the scorching sun we finally made the long walk leading us to the first checkpoint. Passport? Check. Permission to enter by the prison authority? Check. On to the next checkpoint. Leave all your valuables here. Everything. I had a handmade armband with the colombian flag. I had to leave everything with the stiff but still mañana kind of guards. I got an UV stamp on my left arm – this was the only way to differentiate me from the prisoners. I kept worrying, what if I’d sweat a lot? What if it’s rubbed off? There was no time turning back.

I stepped in to the “doomed zone”. This is the middle gate where prisoners gets their last chance to see the outside world, the trees and the fresh wind of air for many years to come. Some will never see it again.

We passed through a narrow but sharply inclining corridor. To the left was the solitary confinement. It’s pitch-dark there. I stepped into the solitary, there was two bunkbeds and no toilet. The stench was beyond imagination. I was told prisoners could only stay there for maximum two weeks. Two weeks of no light, minimal colombian prison rations and no way of cleaning yourself. The feces were just left in the left-side corner. Right opposite was the prison kitchen. At least I was told so.

I continued my steep climb through the corridor and arrived at a metal bared fence. Four prison guards accompanied me, one of them proudly stated that they didn’t carry any weapons. But behind his bulletproof vest was a .357 Magnum. Behind that fence there was a party going on. This was Patio 7. There was a bar-table to the left serving moonshine, transvestite prostitutes were hanging around and exactly every single individual were smoking or injecting Basuko – which is the rest product from cocaine production.

When I entered, with my 6 feet + 4 inches height, weighing in at 95 kilograms – I felt like a Giraffe standing in the crossing of Rothschild/Allenby in Tel Aviv. Everyone just froze. Curious faces. Angry faces. A smiling transvestite. The patio was designed to house 36 prisoners. At that day 1012 prisoners were accomodated there.

The guards stopped in the middle of the patio. Two other guards were anxiously waiting at the metal bar entrance. I was invited to see the three-story prison cells. I hesitated. I stepped forward to the stairs. On the left was the only functional urinoar. The toilets were all out of service. How long? I asked. It’s been like that forever an inmate replied. While standing there, a 5-foot guy was suddenly standing an inch close to me. He was displaying his arms and what he would do to me. He carried a knife, razors and a sharpened shank (essentially a sharpened metal bar). I looked him in the eyes, they were empty.

I set aside all my fear and went up the stairs, about 2 feet wide. I stepped on something soft. A body. Was it dead? No, it was asleep. Only those who could afford a cell had one, they in turn subletted sleeping areas in their cell. A cell designed for two people housed at least 15 people. It was tight. Another inmate told me there was a murder yesterday and the guards didn’t even care. They chopped him to pieces and just left it in the urinoar downstairs. At the upstairs toilets, no larger than 20 square feet, I counted well over 30 prisoners sleeping and living there. I bumped my head into something while looking inside, it was just a guy sleeping in a makeshift hammock.

I made my way down and the guards just told me Rapido! Rapido! Rapido! I was rushed out and back into the corridor where I met guards armed with M16A4 rifles and bulletproof shields. We were ushered into the “Art room”, where prisoners allegedly had recreational time with painting. There were a lot of nice paintings. I asked a guard if the Patio 7 prisoners were doing this. He laughed as if someone had actually ever been there. My eyes were irritated from the tear gas fired into Patio 7. Then some distant gun shots. An automatic burst. I waited in the art room for an hour.

When leaving the prison through that small god-forsaken corridor there were blood traces of something being dragged along the floor into the supposed kitchen. The guards told me it was just meat for dinner preparations. The bloodstains came from Patio 7.

Before leaving, I entered Patio 8 where older prisoners were housed. Pablo Escobar’s bomb-maker. A narcotrafficante. A sicario. But I’ll tell that story another time – how it felt shaking the hand of a terrorist who had killed over 2000 people.

When exiting the prison, the inmate count of Patio 7 had dropped to 1003 inmates.