This is the hardest time to be a Jew in the diaspora. As thousands of thugs march through the streets of the cities in which they live the Jews are forced to take a side in a conflict raging far from their native shores. Every time there is a conflict involving Israel the usual suspects begin their rampage once again.

We won’t be battered into submission here in Israel and we won’t be intimidated into silence in the countries of the diaspora either. From Paris to London to Washington DC the Jews stand together behind their homeland. All over the world the Jews speak with one voice to tell those who seek to cause us harm that they will not break us!

In London the Jews stand united outside the Israeli embassy in their thousands saying NOT THIS TIME! 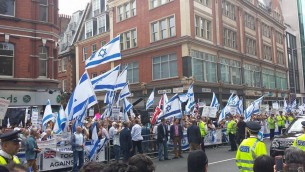 In Paris the Jews don’t get beaten, they fight back against the onslaught of horror set against them.

These are not the Jews who allowed themselves to be beaten.

The issue wasn’t black and white until the thugs of Europe and the new world made it so. Now they have united us as never before.

The fact that we are Jews doesn’t mean it’s our lot in life to accept the suffering heaped upon us by others. We will not be made to feel guilty for having our own land. By the very measures they take to attack us they remind Jews everywhere just why it’s so important that we have a home of our own.

I salute the Jewish community of London that made me the man I am.

I salute the Jewish communities everywhere who refuse to back down from the fight, who refuse to be intimidated off the streets, who are prepared to look the enemy in the eye and say;

“We are Jews and we stand with Israel”