There is a very famous question asked within Jewish tradition, which relates to understanding the possible logical connection between two concepts. During the Bible’s description of the events at Mount Sinai, there is a reference made to the laws of the seventh year fallow, during which the lands in Israel are allowed to “rest”. Despite the great significance given to the religious laws associated with the fallow, it appears strange that the grandest event in Jewish history, specifically the giving of biblical law to the people of Israel via Moses on the mount, should suddenly focus on what is a very agricultural and physical (versus spiritual) commandment. It would seem more appropriate to discuss religious laws associated with the weekly Sabbath, or sacrifices in the Holy Temple.

The actual question asked is: “מה ענין שמיטה אצל הר סיני” or “What does the Sabbatical year have to do with Mount Sinai?”. Colloquially, this phrase is used to indicate that two issues do not seem to have any relationship. But as usual in Jewish tradition, what things “seem to be” is not always what they are.

When I was studying medicine in the late 80s, there was definitely a certain arrogance in the presentation of the materials we needed to know. Too often, we were given the sense that the then understanding of medical issues was effectively complete. For example, when discussing the management of postmenopausal symptoms, it seemed self-evident that the best way to treat the symptoms would be to replace the hormones that a woman’s body was no longer producing naturally. And there was a great deal of research that supported this “obvious” solution. Unfortunately, it was eventually discovered that hormonal replacement actually increased mortality in more women than it helped.

This event was somewhat of a crisis of faith for a number of physicians. It suddenly became clear that the medical universe could not so easily be manipulated by “modern, advanced” doctors. We clearly did not fully understand the links between the various systems that keep us alive. This should have been a very humbling time in medicine’s history. Physicians egos somehow survived, though.

When I was a medical student, had I suggested that antibiotics could cure a stomach ulcer, I would have been told that I clearly have no understanding of surgical disease and should reconsider my career. During the same period of time, the idea of giving a beta blocker [which is used to slow heart rates and control high blood pressure] to a patient with a failing heart, was considered malpractice. These and many other “divine” medical truths turned out to be totally wrong. Like it or not, doctors needed to consider possibilities that seemed to make no sense in terms of the physiology that we understood at the time. There are still far too many doctors who laugh at certain proposed connections between systems within our bodies, until a paper appears in JAMA or the New England Journal, that demonstrates the existence of these connections and their importance.

In the following lecture from the infamous Exponential Medicine conference that I have been referring to in my last blog posts, an association between two organs is described, that at first would be thought to have no possible connection. The association I am referring to is drawn out below. 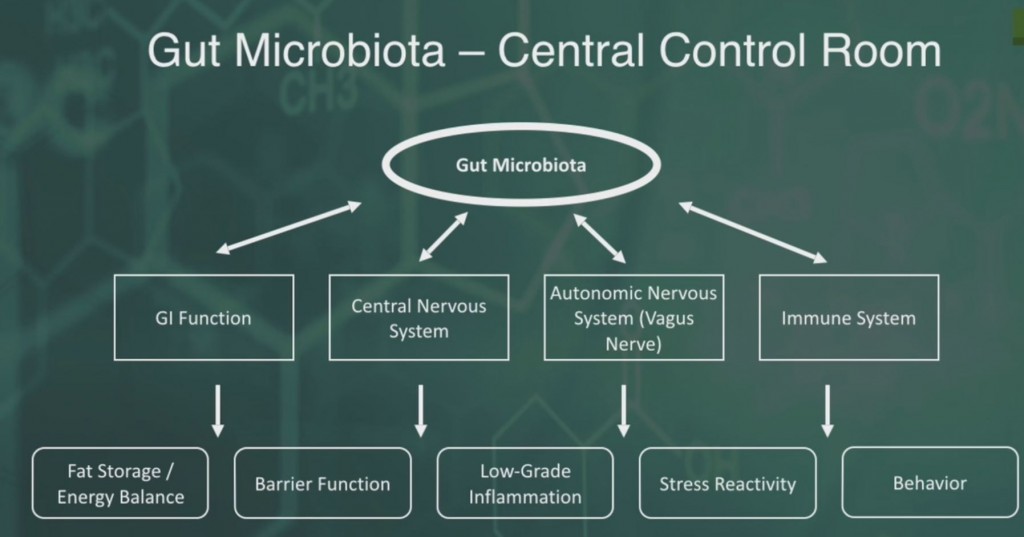 In the image above, one sees a double ended arrow that connects between the microorganisms that naturally reside in our bowels, and our CNS [central nervous system = our brains and spines]. This particular linkage is very strange to anyone familiar with basic CNS physiology. The human brain is protected by a filtering mechanism called the blood-brain barrier. This barrier is critical for protecting the CNS against all types of potential hazards. This barrier is so effective that many medications, even when given intravenously, cannot break through and reach  the brain and spinal cord. This is one of the reasons why treating meningitis, an inflammation of the tissues around the CNS, is so problematic.

That bacteria in our bowels could have an effect on our brains was considered unthinkable until relatively recently. Today, via extensive research, we now know that the gut “micro-biome”, i.e. microscopic living arrangement, can affect many systems in our body. These discoveries are very significant. As it turns out, it may be possible to treat very complicated diseases by manipulating the bacteria in our bowels. In animal studies, and some human research, it is possible to reverse certain serious illnesses by transferring the feces from one healthy agent  to the target with the disease. Contrarily, this also explains how antibiotics, which play havoc with the bacteria in our bowels, can have some of their most serious side effects, even lasting many years.

Understanding the pattern of an individual’s gut bacteria is soon going to be a critical part of personalized medicine. Very often, when the term “personalized medicine” is used, the intent is to discuss genomic medicine. Genomic medicine relates to our genes and the science behind their manipulation. Most people understand that our genes are unique to us, in turn making us unique from the other 7 billion people in the world. But to think that something like bacteria in our gut are also unique enough to be used as a fingerprint, is not something many people consider. When one thinks about it, considering how different one person is from the next, it is amazing that there are so many general cures for various illnesses. On the other hand, when one speaks of a less than 100% cure rate for a given treatment, it may have just as much to do with the uniqueness of the person, as it has to do with the variability in the disease.

All physicians really need to take a step back and reconsider the “truths” that they have held on to for decades. Over time, we are learning that the human body is a more and more astounding machine than we ever imagined. It is impossible to know how long it will be until we fully understand how every part of our bodies connect to every other part. In the meantime, we have to be respectful enough of the grand design of people, such that we do not rule out any associations just because they sound unlikely, if not impossible. Cures for life-ruining diseases are hidden within these internal links between various parts of our anatomy and physiology. If we are true to the science, and not too haughty in our assumptions, it will hopefully not be too long before we discover all of the incredible secrets hidden within us.

About the Author
Dr. Nahum Kovalski received his bachelor's of science in computer science and his medical degree in Canada. He came to Israel in 1991 and married his wife of 22 years in 1992. He has 3 amazing children and has lived in Jerusalem since making Aliyah. Dr. Kovalski was with TEREM Emergency Medical Services for 21 years until June of 2014, and is now a private consultant on medicine and technology.
Comments