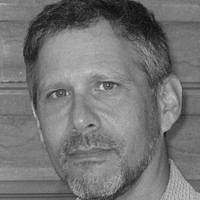 Here is one of those seemingly difficult dilemmas for which, upon reflection, there is but a single moral choice.

You are an editor of an internationally renowned peer-reviewed medical journal whose primary capital is trust among its readers. This trust is built upon over two centuries of publishing articles related to medical research and news. One day, you learn that two primary authors of a politically charged article you published have been peddling neo-Nazi antisemitic conspiracy theories. What do you do?

If you chose distancing your publication from the authors, apologizing to your readers, and informing the authors they will not be published in your journal again, you would be taking a strong stand for decency.

If, however, you are Richard Horton, Editor-in-Chief of The Lancet since 1995, you choose to dig in your heels, deny the obvious, and tell a journalist for a major newspaper, “It’s utterly irrelevant. It’s a smear campaign.”

This is not a hypothetical situation. Two of the main authors of the July 2014 “An Open Letter for the People of Gaza” in The Lancet (which carried 24 signatories) promoted a video made by American white supremacist David Duke. The two are Drs. Paola Manduca and Swee Ang. 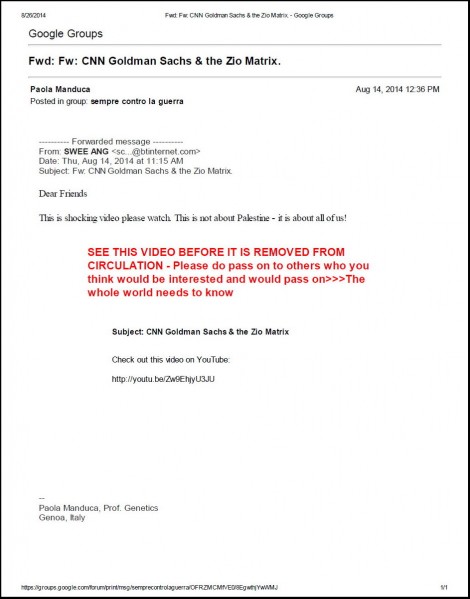 On August 14, 2014, Manduca forwarded an email from Ang with the subject line “CNN Goldman Sachs & the Zio Matrix” to the Italian Google group Sempre Contro la Guerra. The email contained a link to a Duke video of the same title. In her email Ang wrote, “This is shocking video please watch. This is not about Palestine – it is about all of us!” The email also contained, in bold red lettering, “SEE THIS VIDEO BEFORE IT IS REMOVED FROM CIRCULATION – Please do pass on to others who you think would be interested and would pass on>>>The whole world needs to know.” (sic)

The video is described on Duke’s YouTube page as “reveal[ing] how the Zionist Matrix of Power controls Media, Politics and Banking and how each Part of this Tribalist matrix supports and protects each other!” The video labels the Federal Reserve Bank as “the Zio Club FED,” calls NBC News anchor Brian Williams a “good Shabbez goy Zioscript reader,” and identifies U.S. Supreme Court Justice Elena Kagan as a “Zio tribalist.” 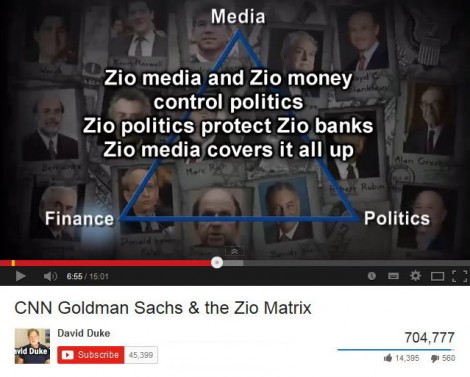 The David Duke email is not the only overtly antisemitic one that Manduca forwarded. She also posted an article that compared Israel and the American Jewish community to a “strangler fig” parasitically feeding off the host/victim nation – the United States – by controlling key American institutions. In another email, headed “Egyptian ruler General Abd al-Fattah al-Sisi is a Jew,” she described Judaism as a “‘blood determined’ religious group with ethnic and racist background and imperialist and genocidal in the context of Palestine.” (sic)

One day after the Boston marathon bombings in 2013, Manduca forwarded an email that provided a conspiracy theory blaming “Zionists” for the bombing. “Let us hope that someone in the FBI is smart enough to look more carefully at the clues in Boston and find the real culprits behind these bombings instead of buying the Zionist spin,” the email said.

When confronted by a reporter with this evidence, Manduca denied she was antisemitic and took on the role of a free speech martyr: “I legitimately use my right of freedom of opinion and do not agree or value the politics of the government of Israel, nor of many others, including Jews in and out of Israel.”

In response, Horton wrote that all this is “utterly irrelevant.” He also declared that he does not “honestly see what all this has to do with the Gaza letter.” He also announced that, “I have no plans to retract the [Gaza] letter, and I would not retract the letter even if it was found to be substantiated.”

That these authors have been peddling in antisemitic conspiracy theories is clearly substantiated. But there is no sign that Horton will take the moral step of distancing himself and The Lancet from them, remove the “Open Letter” from The Lancet’s website, and apologize to The Lancet’s readers and the medical community.

If he continues this stonewalling, The Lancet’s legacy will be as defenders of the promoters of vile antisemitic bigotry of the worst kind.

About the Author
Yitzhak Santis is a resident of Kibbutz Hannaton in the Lower Galilee.
Comments