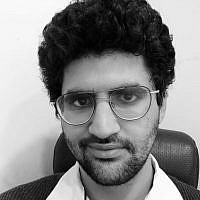 The Blogs
Dvir Aviam Ezra
Apply for a Blog
Please note that the posts on The Blogs are contributed by third parties. The opinions, facts and any media content in them are presented solely by the authors, and neither The Times of Israel nor its partners assume any responsibility for them. Please contact us in case of abuse. In case of abuse,
Report this post.

With blue and White party being dismantled and the Labor-Gesher-Meretz list split to five different factions, Israeli leftists are left disappointed. From several conversations I conducted with central activists in left-wing parties it seems most of them feel demoralized, tired, and even resigned towards the Israeli left being in dire straits. The fact that the Labor party, previously the dominant force in Israeli politics, does not even pass the elections threshold in new polls only add to the feeling of desperation.

However, in my opinion, this situation also poses a historic opportunity for the renewal of the Israeli left. In the last few years, it seems that the left, previously a diversified and eclectic group of movements and political parties, decided to focus only on socio-economic issues. This process was helped by the rise of the “red” faction in Meretz, Amir Peretz, and Shelly Yachimovitz in the Labor party and the resurging influence of trade unions on the left-wing parties. The activists supporting this trend believe that while focusing on a planned economic system may help bring disadvantaged voters from the Israeli periphery while talking too much about the ongoing military occupation in the west bank and other human rights issues my scare them away. As part of this position, MK Orly Levy Abeksis joined the Labor/Meretz list and it ended with her jumping ship and siding with Netanyahu’s political block.

The truth is that from a wider perspective, it seems like this was a bad idea from its onset. Most center-left voters belong to the middle-upper class, and while they do support a generous welfare system, most of them are economically moderate and do not feel any special connection to the soviet anthems or the workers’ May 1st day. Most of those voters are pragmatic people who merely want to live in a progressive democratic country next to a future Palestinian state, free of religious intolerance and enjoy a free political system. Israel’s left-wing political roots also point out to similar positions, two of three founding parties of Meretz were liberal and capitalist, supported laws such as compulsory arbitration prior to strikes in the public sector, free trade agreement, and deregulated economy. The last distinct left-wing government in Israel, Rabin’s second administration, also promoted privatization and signed Israel into international capitalist trade treaties.

This basic ideological gap between the party activists and left-wing voters has led to the latest political tragedy – a failed, complicated and incoherent political union that lost 4 sits in the elections and crumbled immediately after, all the while winning almost zero votes from the Israeli periphery. Now, the Labor party is going to join Netanyahu’s government, putting its socialist ideology above all else and supporting a government that will initiate unilateral annexation of the west bank and damage the Israeli legal system. It is then clear that the attempt of a ‘grand left-wing union’ between Pro peace liberals and Hardcore Socialists failed, the main question is what we can do next.

I and my colleagues firmly believe that it is high time the Israeli left goes back to its roots and adopt a liberal ideology. The liberal left will be capable of advocating for the occupation’s end, full separation between church and state, LGBTQ equality, and the cancellation of the nation-state basic law. All the while supporting moderate economic positions – free market and welfare system based on the budgetary limitations (the “Nordic model”). Such a party is also going to be more consequent because the ideology of Liberalism also encompasses other issues such as the fight against torture and administrative detentions, Marijuana legalization and many other topics that were neglected by the left in the last three elections.

Left-Wing Liberalism is not only correct from an ideological point of view, rather, it is a political necessity for a political block fighting for his very own survival. Lately, more and more young Israelis embrace liberal politics, for example, supporting an end to the obligatory army draft. The fact that in our party we still have elected officially supporting and outdated policy leading to the imprisonment of thousands of youngsters, mostly from unprivileged communities, each year. Economically, many people started discussing problems with the workers’ unions and high tariffs on agricultural products. The attachment of some Israeli leftists to a socialist-Zionist language advocating for import bans is equally ridiculous. Thus, many voters are yearning for a liberal political party that will promote those issues and while “Zehut” by former MK Moshe Feiglin did try to raise the banner of Liberalism, most voters were discouraged by its messianic and often extremist language on the Israeli-Palestinian issue. Hence, people within the left should be the ones to promote liberalism and win over droves of voters looking for a pro-peace reasonable left-wing alternative.

In the last few months, me and several other activists promote the new political group “Liberals in Meretz”, we are creating a change within the Israeli left and engage in intellectual dialogue with constituents and decision-makers alike.  A liberal-left party is long overdue and has the potential to attract people from all walks of life while revitalizing the political left in Israel.

About the Author
Dvir, 23, is an experienced legal consultant and youth activist currently living in Tel Aviv, holding LLB and LLM degrees from the Hebrew University of Jerusalem. He worked in several law companies and legal NGOs and served as a legal officer in the IDF. He is also active in the political party Meretz, often attends international professional conferences and publish articles on different mediums. I am an avid advocate of Liberalism, Free Trade, Globalization and Peace.
Related Topics
Related Posts
Comments