Last night, we received the sad news that our beloved Uncle Leon had passed away. While he had been sick for several years, the news came as a shock to the entire family. Uncle Leon leaves behind a legacy that cannot be described in words, but his examples and lessons will be remembered for many generations to come.

Uncle Leon was not my uncle by blood, but he and his late wife Aunt Alicia A”H always considered me to be close family. When Uncle Leon would introduce me, it was always as “my nephew.” He never referred to me as “my niece’s husband.” This small gesture may seem insignificant but it really shows the kind of person he was. There was nothing that he would not do for his family. When I joined the family fifteen years ago, Uncle Leon was an active, energetic man, who spent his time and resources trying to make a better life, not just for his family, but for his entire community.  He and his wife were among the first Jews to settle in Teaneck, New Jersey. Today, Teaneck is a hub of the East Coast Jewish community. Fifty years ago however, Teaneck was a very difficult place for a Jewish family to settle down. Uncle Leon made sure however that the Jewish community flourished. He was involved in his Shul as a gaabi, Baal Tfilah, and Baal Kore, and always brought a friendly smile to new families in the community.

Uncle Leon loved a good “L’Chaim” at the end of a long work day. Several years ago, my wife and I were invited to the house for dinner. Immediately, Uncle Leon offered me a shot of whiskey and began making me feel at home. There were no agendas, no hidden opinions, and no acts. Just a genuine nice guy who wanted to make sure that we were having a good time. Uncle Leon was a true “mensch” in every sense of the word.

About 12 years ago, almost to the day, we received word that Uncle Leon had a stroke. Just like that, Uncle Leon’s world changed. The energy and spark were still there, but with a lot more physical limitations. This is something that actually always impressed me about Uncle Leon. With his conditions, no one would have ever blamed him for taking it easy. While some would argue that maybe he should have, Uncle Leon never allowed his physical condition to curtail his activities. He traveled and for many years, attended every simcha possible. Perhaps the truest testament to Uncle Leon’s character came eight years ago, when he and Aunt Alicia decided to make Aliyah.

Making Aliyah is stressful and difficult for anyone, let alone an elderly couple with severe physical disabilities. In true Uncle Leon fashion though, those challenges were not going to stand in the way of a life long dream. They came, and quickly learned about Israel’s medical system, benefits, and yes, unfortunately the hospital system as well. Over the past few years, Uncle Leon’s health continued to deteriorate, but he still never let it stand in his way. Uncle Leon loved davening with a minyan, and despite many obstacles made it to Shul more often than many healthy people. I have often used him as a support when telling my own sons to get to morning minyan. “If Uncle Leon can do it, you can too!” I cannot count the number of times I have said these words. A few years ago, during one of his hospital stays, I knew I was going to be in Jerusalem for work, so I told my wife to call Uncle Leon to see if he needed anything. I was expecting him to maybe ask for a book or magazine. Instead he asked for his Tfillin. When I arrived at the hospital, I helped him put on his Talit and Tfillin and I sat in awe as he said “Shema.” Uncle Leon truly believed that despite his issues, there were always people less fortunate. When he was finished, I carefully removed the Tfillin and wrapped them up. Even in those few minutes, I could see a difference in Uncle Leon’s demeanor and outlook. Hospital visits also gave Uncle Leon a chance to try out his new jokes. He loved telling jokes and funny stories, even from a hospital bed.

Even as his physical condition continued to deteriorate, Uncle Leon made an effort to be involved in every simcha. This past Chanukah, we were so fortunate to have Uncle Leon as a special guest at my son’s Bar Mitzvah. Again, no one would have thought any less of him if he had said that coming to Mod’in, sleeping in a strange bed, and being pushed to a strange Shul were too much. Uncle Leon was actually one of the first people to respond “yes” that he was coming. When he was called up to the Torah for an Aliyah, his face was beaming and it was clear that he was where he wanted to be, surrounded by family. We did not know at the time that this would be one of Uncle Leon’s final family smachot. 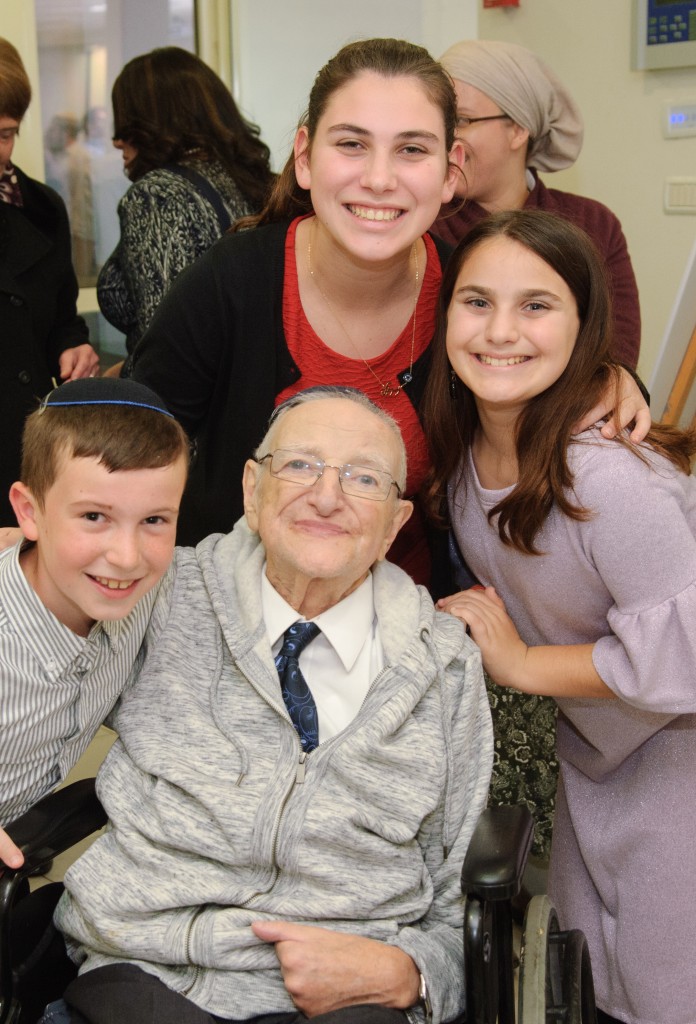 Uncle Leon at a Simcha, surrounded by family.

All families have gone through the loss of loved ones, and every person has a story. Uncle Leon’s story though is unique in that he was not a famous Rabbi, or a rich man. He was what would be considered to be a “regular” guy. Those who knew Uncle Leon however, would agree that he was far from a “regular” guy. His midot/good deeds, his kindness, and his determination made him a true inspiration to all those around him. He really was the true definition of a “mensch.” Uncle Leon leaves behind children, grandchildren, nieces and nephews, and countless people who have benefited from his good deeds and kindness. Uncle Leon’s legacy will last for many generations to come. We will miss his presence, jokes, and funny emails, but his legacy will truly live on through all of those who had the privilege of being part of his life.

About the Author
Aryeh Eisenberg is the CEO and General Manager of Edu-Together, an online education technology provider for schools and individuals. Based in Israel, Edu-Together works with students all over the world.
Related Topics
Related Posts
Aryeh Eisenberg
Comments