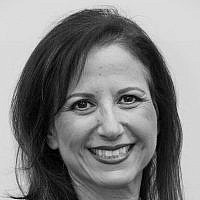 The Blogs
Ruth Weiss Bergman
Apply for a Blog
Please note that the posts on The Blogs are contributed by third parties. The opinions, facts and any media content in them are presented solely by the authors, and neither The Times of Israel nor its partners assume any responsibility for them. Please contact us in case of abuse. In case of abuse,
Report this post.

January 27 is International Holocaust Remembrance Day, the date in 1945 when Auschwitz was liberated by the Red Army. The liberators witnessed first hand the extremes of where hate can lead.  They saw human suffering unlike any other, all because some people could no longer see the humanity of others.  As responsible and ethical human beings we must instill, through our words and deeds, the lessons of the Holocaust, and empower people to speak up and take a stand.  With the rise of antisemitism and other prejudices in the the United States and across the world today, I’d like to take this opportunity to review a few of those lessons.

First and foremost, we must teach the value of all human life.  We are all created “b’tzelem Elokim,” in the divine image. No one is the Other, and no one is less worthy of life or human rights.  Disagreeing with someone about religion, politics, or anything else is part of intelligent discourse and the sharing of ideas.  Threatening people because of those differences is not.  Turning people with opposing viewpoints into the enemy is dangerous. Unchecked hate leads us down a very dark and dangerous path.

The second lesson is about responsibility and choice.  We all make choices, including how we deal with disappointment, illness, economic hardship, and a million other challenges.  Do we work to make life better, or do we blame the Other for our misery?  Do we want to help all people, or just ourselves?  Of course, we make our choices based on how we value other members of our community.  This lesson must be built upon the first.

The third lesson is that the words we hear and speak matter.  Developing media literacy skills allows us to tell truth from fiction, fact from propaganda.  It is easy to listen to the rhetoric that confirms our biases and justifies our prejudices; with social media, it is easy to repeat these lies to an international audience. Using our critical thinking skills to discover truth is essential for demanding accountability from our leadership and sustaining our democracy.

The fourth lesson is that democracy is hard and messy.  It requires cooperation and working with people we don’t agree with.  It means sometimes our preferred policy or candidate wins, and sometimes not.  But democracy cannot stand when we do not accept that it is not perfect, and that we don’t always get what we want. It requires compromise and agreeing to uphold the outcomes even when we are disappointed in them.

Life in Germany was hard after WWI. Weimar democracy was fragile and messy.  It required patience, hard work, and belief in its value to make life better and fair for everyone.  Ultimately, the Germans found it too hard to sustain. Choosing to scapegoat the Jewish people for Germany’s ills was easier than taking responsibility.  Choosing to believe  propaganda was easier than seeking the truth. Choosing to believe the rhetoric that confirmed long-held antisemitism was simpler than questioning it. Choosing authoritarianism over government of the people by the people for the people was easier. Choosing to boycott Jewish-owned stores and silently accepting the Nuremberg laws was easier than standing up for one’s neighbors and friends.  Choosing to accept the notion that the entire Jewish people should pay for the crime of one young man without considering the injustice of that idea was simply easier. The violence and murder of Kristallnacht happened because people made it happen.  It was a choice.

I have the great honor of working with children and their teachers to instill the values upon which these lessons are built.  Through our teacher workshops and museum education, we at the Holocaust Memorial Center teach about the values of compassion and speaking out when we see injustice.  Through the examples of the Righteous Among the Nations we teach that choosing to fight hatred is always the better choice, even when it is hard and dangerous. We teach that history does not happen; we make it happen. We can make a difference. We can make choices that matter.  We can influence others to make ethical choices and stand up for what is right. But it is not just educators who must teach these lessons.  It is all of us.  Despite the pandemic, despite living in a broken and hurting world (or maybe because of it), it is more important than ever the we stand up for all people, fight for democracy, and value our neighbors.  There is no Other.  There is only Us.

About the Author
Ruth Bergman is the Director of Education at the Holocaust Memorial Center in Farmington Hills, Michigan. Ruth oversees all aspects of Holocaust education, including statewide teacher training in Holocaust content and pedagogy as well as museum tours and docent training. Previously, Ruth taught at Hillel Day School, Frankel Jewish Academy, and was an instructor for the Florence Melton School of Adult Jewish Learning and Federation-sponsored adult education courses. Ruth earned her B.A. in English literature from Columbia University and did graduate work at the Hebrew University in Jerusalem. She is also completing a Certificate in Jewish leadership for Educators from the Spertus Institute for Jewish learning and Leadership in Chicago.
Related Topics
Related Posts
Comments