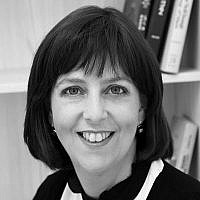 The conversation between liberal Jewish movements and Orthodoxy sometimes sounds like both sides are talking to a brick wall. Neither side can penetrate the thinking of the other or evoke the slightest of comprehension. Both sides walk away from the conversation feeling deeply hurt and undervalued. This lack of mutual understanding is especially apparent in the discussion of women’s rights and Judaism.

On the surface, the point of contention seems to be the theological debate over the divine nature of the Torah and the Sinai revelation. Orthodoxy views the Torah as a God-given document, which governs every aspect of Jewish life, while the liberal movements, starting with the Pittsburg Platform, either completely reject or call into question the divine authorship of the Torah.

Yet on a deeper level, the argument between the liberal and traditional streams of Judaism has long passed the debate over the reporting of current events in The Sinai Times 3,000 years ago. It is more akin to two people donning tinted glasses – one with red lenses, the other with blue – trying to reach an agreement about the color of a wall. Having adopted two fundamentally different overarching value systems (what Neuro-linguistic Programming calls “meta-programs”), both sides can’t fathom each other’s attempts at interpreting and making sense of the world.

The two schools of thought are at odds because they truly speak two different, mutually exclusive, languages. The liberal approach has entirely bought into the American parlance of rights, in stride with the deliberate naming of the seminal document of American independence as the Bill of Rights. As such, the paramount ethical value of liberal Judaism is the individual’s right to do as he pleases as long as no one else is harmed.

Respected Conservative historian Professor Jack Wertheimer described this as the Judaism of “unbridled individualism and its evident indifference to collective Jewish needs,” in which “the measure of Jewish authenticity is whether it feels right…” (emphasis his). The direct result of this thinking pattern is an almost automatic adoption of the politically liberal platform on issues such as the peace process, women’s rights, abortion, same-sex marriage, immigration, and the relations between religion and state, all of which come together under the all-encompassing imperative of tikkun olam.

On the other hand, the traditional Jewish approach speaks a language of responsibilities. Its starting point is the now widely accepted philosophy of Rabbi Moshe Chaim Luzzato, as articulated in Derech Hashem, which teaches that human beings come into the world to overcome challenges and elevate themselves spiritually, based on an intrinsic value system articulated by a Higher Authority.

Thus, traditional Jews examine each issue through the prism of adherence to the Torah. In a process of gradual societal changes, new ideas perceived as compatible with the Torah’s goals are absorbed, while those seen as antithetical to Jewish teaching are discarded. In case of doubt, a wait-and-see approach is adopted.

This dichotomy comes into play forcefully when applied to the hot-button topic of women’s role in religious practice. In keeping with its commitment to individual rights, liberal Judaism staunchly supports women’s ability to pick their own forms of worship. In the words of Reform Rabbi and President of the Union of Reform Judaism Rick Jacobs, “Judaism [can be] the problem or the solution” in affirming women’s ritual rights.

In contrast, traditional Judaism views men and women as fundamentally equal yet different, with each gender tasked with its own set of responsibilities. In the words of Eliyahu Rabba (9) “I call the heavens and the earth as my witnesses that man or woman, Jew or non-Jew, slave or maid-servant notwithstanding, the divine spirit rests on a person based on his [or her] actions.” The litmus test of this equality is both genders’ ability to reach righteousness and even prophecy, the epitome of spiritual development.

In keeping with Judge Ruth Gavison’s distinction between the equality of opportunity as opposed to the equality of identity, traditional Judaism charts different paths for women and men for reaching the ultimate goal. In discussing women’s ability to learn Torah or perform time-bound mitzvot, the halacha talks of exemption, consistent with its language of responsibility not rights.

The obvious question is whether women can (and should) use the tools traditionally available to men for the purposes of spiritual advancement. In undertaking a new responsibility, it is important to take into account if it will come at the expense of existing obligations. Every change comes with its price tag, especially when it grows and takes on the shape of communal expectations. And this is where the cost/benefit analysis becomes complicated.

When it comes to Jewish learning in an age of widespread secular education, the benefits of rigorous schooling are quite obvious. But what is the price to supermoms’ self-perception and by extension their functioning as worthy Jews, when they can’t squeeze in a 40-minute shacharit or a serious chevruta between being perfect mommies and top-notch professionals? What is the damage to the perception of Judaism for women, who feel uncomfortable with traditional male roles in a society where egalitarianism is sacred? What is the price paid by everyone, when women are subtly (and not so subtly) encouraged to compete with men, in an effort to prove that they are just as powerful, equal, and worthy (the popular apologetic line of “women are more spiritual than men” is just one such example)?

This is the reason traditional Judaism prefers a slow, wait-it-out stance to changes in female roles. Judaism cherishes women as much as men. Traditional men are not misogynists and traditional women do not suffer from the Stockholm syndrome. All that they advocate is a careful approach to change that will empower everyone to take their God-given responsibilities seriously.