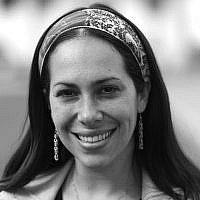 The Blogs
Yael Eckstein
Apply for a Blog
Advertisement
Please note that the posts on The Blogs are contributed by third parties. The opinions, facts and any media content in them are presented solely by the authors, and neither The Times of Israel nor its partners assume any responsibility for them. Please contact us in case of abuse. In case of abuse,
Report this post.

The people of Israel are at war…again.

We had hopes for a ceasefire, yet those dreams were dashed quickly by code red sirens and falling rockets. Peace is something so far-fetched in our part of the world. But, for a few hours, we had hopes that quiet was attainable.

Barrages of rockets have been hitting cities from Sderot to Nahariya – and rockets don’t discriminate between rich and poor, Jewish and Arab, prepared and unprepared. And, truth be told, most of us are not prepared at all. How can you possibly prepare to have war become part of your everyday life?

I am not okay with driving in my car and having my favorite song on the radio interrupted by 10 separate announcements of “code red” sirens sounding throughout the country.

I can’t find solace even in the heartbreakingly beautiful actions of families in Sderot and other southern cities, families who leave their doors unlocked so that passers-by can run into their shelters when the code red siren sounds. The fact that they have to live like that that is just sad.

I hate it when, each time I hear a car accelerate, a motorcycle drive by, or a lawnmower turn on my heart skips a beat, as I think it could be the blast of an incoming rocket.

As in every conflict, it is the children and elderly who suffer most. Even the children have parents to cry to, but the elderly do not. They are utterly alone, with their tears being drowned out by code red sirens and explosions.

If you look closely in southern Israel, you can find these elderly that I speak of. If you’re interested, you can find them hiding under their beds as sirens blare, sleeping in their bathroom because it is the only room in their house without windows, and crying alone under their covers because they ran out of food.

You won’t find most of these elderly in shelters, because they rarely get there in time. They fear that they’ll break a bone rushing to a shelter, or that they’ll be too late and will end their life trying.

How do I know? Because I have spoken to them myself.

For the past week, hundreds of volunteers and my fellow staff members at the International Fellowship of Christians and Jews (The Fellowship) have been answering thousands of calls on the emergency hotline for elderly that The Fellowship set up.

We listen to their cries. We inquire about their needs. And then we act. In the past few days we have visited hundreds of elderly and brought them food, medicine, and hope.

The house of Lillian, an 80-year-old woman living in Ashkelon without a bomb shelter in her apartment, was heartbreaking, yet sadly typical of the thousands of homes we visited.

Lillian ran out of medicine two days before our visit. If it wasn’t for our emergency hotline and volunteers, she would probably be dead right now. Not from the bombs. Not from the terrorists. But from loneliness, despair, and lack of the essentials she needs to live.

The people of Israel are at war … again. And the repercussions are a lot broader and farther-reaching than just coping with code red sirens and bombs.

If you or an elderly person you know lives in southern Israel and needs help, call The Fellowship’s emergency hotline: 09-763-2226