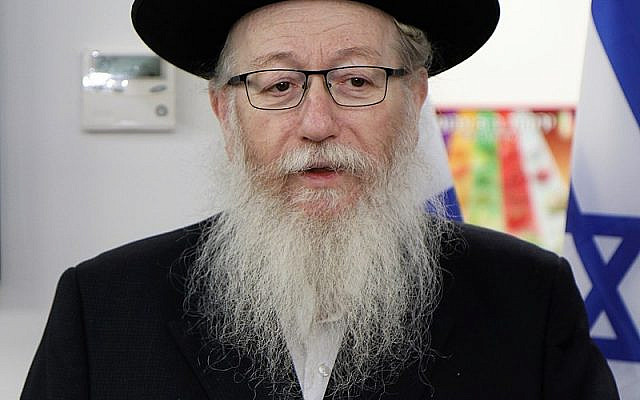 I debated whether to write at all.  I typically try to avoid airing Israel’s dirty laundry in public.  We have enough detractors who will spare no effort to make up and twist things about us. I don’t need to feed that.  I also try not to write things unusually divisive, in general and especially not about fellow Israelis, and especially not at this season.  I am also mindful that I have many non-Israeli and non-Jewish friends who don’t live the nuances we do, and don’t understand problems we have here the way Israelis do, about which we often disagree, even fiercely.  Life is wonderful here but far from perfect. Yet friends overseas who don’t understand all the details and nuances can know about some of the wrinkles and pray that these get resolved.

My trigger is the impending lockdown and the failure of MK and soon to be former Housing Minister, Yaakov Litzman.  This week, Litzman resigned as Housing Minister in protest of the planned shutdown that’s scheduled to begin Friday on the eve of Rosh Hashanah, lasting three weeks and including Yom Kippur and Sukkot.

I don’t know that we needed a total shutdown now, but if we did, I suspect we needed it a month ago.  On that I agree with Litzman, however that’s not to say it would have prevented us entering the holidays still in a prolonged shutdown.

If we need a shutdown when infections surpassed 4,000 a day, perhaps a shutdown a month ago would have prevented that, and maybe been able to salvage some of the holiday celebrations and observances.  I am resigned, in the interest of my and my family’s health, and the well-being of the country, that this will not be a normal year.  Rather than focusing on rituals and organized prayers to which we are accustomed, I am searching for other ways to add meaning, spirituality, and to the sincerity of my prayers that require of us each under any circumstances to deep personal introspection no matter the circumstances.

As a friend shared, “I believe that God wants us to observe the current holiday in a way that best ensures that we will be able to observe the next one.”

However, I’m bothered by how Litzman, used his letter of resignation to suggest that he’s concerned for the well being of others outside his community. “My heart is with the thousands of Jews who come to synagogue once a year and this year won’t come at all due to the lockdown.”  I don’t buy it.

It’s hard to accept this as anything more than politics in the wake of his failure as Health Minister, although fair to point out the current Health Minister, Corona Cabinet and overall government haven’t done better.  I take exception with Litzman’s seeming charade to be caring for others because he has a very distinct community that elects him, much more so than that of most Israeli political parties.  And that it seems (if reported numbers are correct) that both Litzman’s ultra-Orthodox and the Arab communities are disproportionately leading the country in infections. This means that they are disproportionately not using safe practices to protect themselves, or the rest of us.

Indeed, if this is all correct, and I have no reason to believe it’s not, had these communities observed best practices to prevent the spread in their communities, maybe Israel would not be on the verge of a shutdown that’s not good for any of us.  It’s also reasonable to think that the communities disproportionately driving the infection rates may not do anything to reduce the overall infection, especially the ultra-Orthodox who Litzman represents. Egregiously, he allows them to think that the closure is somehow due to a disregard for the desire of his community to be able to pray and observe as they want.  And as many may very well do, despite the closure.

So rather than shedding a few crocodile tears for those who only go to synagogue on the High Holidays who are now not able to do so, the behaviors of these communities (and others who flaunt wearing masks and practicing other ways to stay safe and healthy for themselves and their communities) have ensured that.   Worse now, how many more Jews who are police or army, and who would otherwise be observing the holidays, will now be required to work on the holidays to enforce the closure, and particularly in communities that have not been responsible until now.

As Litzman represents a distinct community that has seen a disproportionate rate of infection, he’s failed them and us all by not working to ensure that his constituents do what they should have these past months to allow the infection rate to get out of hand.  Not only does this violate the imperative to save lives, it also causes more Jews to have to work on the holidays.  Had the Minister of Transportation tried to build roads or train lines on the holidays it could force the government to fall.  But “only” having police and army working in higher numbers doesn’t seem to bother anyone.

I get that Litzman might not want to be part of a government that is enforcing a shutdown during the holidays.  He needs to keep up appearances for his constituents.  But his doing so, and not taking personal responsibility shows a huge lack of leadership.  As much as he is trying to create the perception that he’s looking out for his community, he’s failing them.  People will get sick, hospitalized, and die as a result.

Neither Litzman personally, nor the ultra-Orthodox or Arab communities generally, deserve all the blame.  I hope nobody will use my words here to do so.  Part of the infection is circumstantial.  That’s part of a pandemic. This government was formed to tackle the pandemic, medically and economically.  So far, its failed.  Overcoming the pandemic has become unusually political, not practical, and not sufficiently focused.  If we could point each of our ten fingers in a different direction, that’s still not enough directions to legitimately cast blame.

If a shutdown was needed, it was needed weeks ago.  I will do my part by continuing to use best practices if only for myself and my family.  I may participate in prayers from my front yard, but am content to pray alone and use the challenges that we are all facing as a catalyst to create opportunities for deep reflection and tshuva that will be no less valid as previous years in a synagogue, with people leading the prayers with the most beautiful and impassioned appeals that we be inscribed for a good year.

We all need that and its my prayer that we all realize it.  God willing next year, we will all be around and the pandemic will be far enough behind us that we can pray together in our communities as we are accustomed.

Our prayers are in the plural, as a community. Israel’s leaders would be well served to remember that, and focus on what’s needed and good for us all, and not for their own narrow interests.