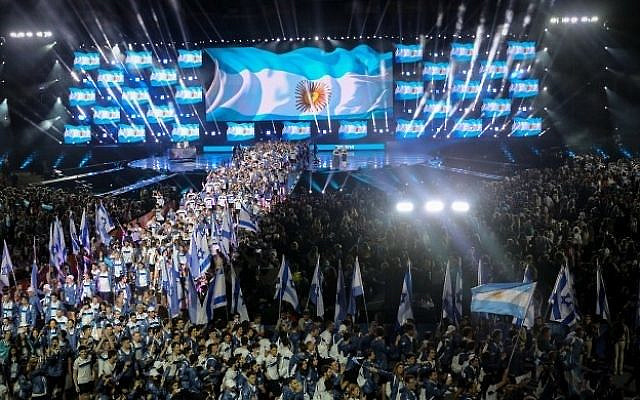 For the first time since 2017, Israel will see the return of the Maccabiah Games this week – the third largest sporting event in the world. Traditionally taking place one year after the Olympics, the 21st Maccabiah Games were postponed one year to July 2022 and will include 30,000 competitions at 150 sports venues that will include 78 tournaments in 42 sports. In total, 10,000 athletes will take part – 1,700 of whom will be part of the local Israeli delegation.

Ahead of this occasion, I was invited alongside a group of journalists to the Kfar Maccabiah Hotel in Ramat Gan. I went to receive my press credentials for the opening ceremony taking place later this week, and as luck would have it, I will also be able to bring my (brand new!) wife Daniela along for the ride. The planning of our wedding for the first half of this year explains partly why I have been absent from my Times of Israel blog, and the Games will serve as a nice date night before some travel we have planned towards the end of the year.

During the meeting, we learned about the history of the Games and the impact it has on the world’s stage. Since its inception in 1932, the Maccabiah Games have grown into a truly global event. There are 450,000 members around the world who belong to 400 clubs in 60 countries. This year, it is the 21st time the Games will take place – and it is set to be the largest one in its history.

Considering there still exists a stereotype that Jews generally avoid playing sports, the Games are doing a good job at dispelling any future generations from believing this to be the case. After the press meeting, with my media pass firmly in hand, a group of us were escorted to a museum that celebrates Jewish sports throughout the years. Here, we saw just how prominent Jews have been in sports teams that have competed in the Olympics and other games. Judo champion Or Sasson, whose handshake was refused by Egyptian competitor Islam El Shahaby in 2016, appeared in video interviews alongside other stars who had a chance to share their career highs and lows.

In my work at CTech, I have been distracted recently by the worrying news coming out of Startup Nation and the state of the tech ecosystem. While CEOs and their marketing managers assure me their companies are undergoing standard ‘restructuring’, it does not stop me from noticing how enterprises that only last year raised hundreds of millions of dollars are now firing up to 17 percent of their workforces. It is not a trend I cover comfortably.

On top of that, the Israeli government has once again collapsed and elections are expected to take place this coming November in an attempt to finally get the country out of a political deadlock that has lasted four years.

It is with the backdrop of tech and political uncertainty that assures me the Maccabiah Games are coming at the perfect time. The two-week event will be broadcasted live via DAZN and offer us all a chance to finally return ‘back to basics’. We can watch the Games, enjoy some good old-fashioned sportsmanship and patriotism, and celebrate Israel’s ability to put on a good show.

The extent of my interest in sports usually stops when passively following some countries during big global tournaments. However, this year feels different. To me, the Maccabiah Games aren’t just a chance to celebrate sport. They are a time to celebrate the resilience of Israel as a nation – one that has recently had to overcome challenges such as the pandemic, a tech talent shortage, and ongoing political turmoil.

The Maccabiah Games to me will represent something that transcends all those issues that remain on our minds – a chance for something to come and distract us from the news that has depressed us for so long. As I departed from the press meeting and now prepare to attend the opening ceremony, I will do so by remembering all the things that Israel has to offer outside of the problems facing Startup Nation and the melodramas coming out of the Knesset.

My friends know I have no qualifying skills or opinions in most sports, and yet I plan to give the athletes the same respect I do to the countless CEOs and Founders I speak to every week. Like them, they are demonstrating passion and perseverance – a trait I see all too often among Israel’s ambitious youth.

I wish them all the best of luck in the upcoming event. Game on.

About the Author
James Spiro is a journalist and editor at CTech by Calcalist. With degrees from the UK and USA, he has a background in journalism, public relations, and political analysis. He has a weekly newsletter that goes out on Fridays (www.JamesSpiro.com/subscribe) and is active on Twitter: @JamesSpiro
Related Topics
Related Posts