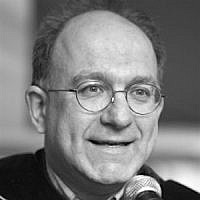 The Blogs
Evan D. Morris
Apply for a Blog
Please note that the posts on The Blogs are contributed by third parties. The opinions, facts and any media content in them are presented solely by the authors, and neither The Times of Israel nor its partners assume any responsibility for them. Please contact us in case of abuse. In case of abuse,
Report this post.

As soon as I arrived in Israel (Tuesday, March 14, 2017) after an 11-month absence, I knew that something had changed. There were new words in the Israeli lexicon that were unfamiliar to me. Perhaps I was just having trouble shaking the cobwebs from my Hebrew attic, I wondered?  No.  There was definitely something strange that hadn’t been here when I left last April.  As always, for sage counsel, perspective, and Hebrew language education, I decided to seek out my next guru-taxi driver. On exiting Ben Gurion airport with my new rolling suitcase with swivel wheels (what a M-chaiyah!), I found the taxi stand brimming with taxis. Unfortunately, the young woman brusquely but efficiently pairing ride-seekers with ride-providers was only concerned with my destination (Leonardo Beach Hotel, Tel Aviv) and the number of people in my party (1) — and not with my requirement that the taxi driver have advanced training in the humanities, languages, history, and sociology.   Luckily, I was assigned to the taxi of Avi A – a consummate Hebrew language instructor and deep thinker.

“Mah Shlomcha” (How is your peace)? I asked Avi, on entering the cab.

The standard response to this common inquiry is “B-seder” (In order), or perhaps, “Ha-col B-seder” (Everything is in order.)

Avi opted instead for “Baruch Ha-shem” (God be blessed). This is also a common response. It is used by religious as well as non-religious Jews (Avi wore no kippah) to mean, everything is fine, thank God.  (“Inshallah” (If God wills it), in Arabic serves a similar purpose and has a similar Middle Eastern fatalistic flavor.)

Normally, either response would be followed up immediately with a reciprocal inquiry about my “peace”.  And that is what I was expecting to hear. But I didn’t. And so I was put off my meet-and-greet-in-the-taxi game.

I hesitated. I replayed the concatenated question in my mind while I pretended to be fiddling with my backpack. Playing the probabilities meant I should parse it this way:  V’ (And), Mah (what) and shlomtrooomp(???)

But what was a “shlomtrooomp” and in my rush to leave the US before the mega-snow storm, had I forgotten to pack mine?  Was it something to do with the hotel? No, that’s a “Ma-lon.” Was it something to do with my passport? No, that’s a “Dar-con.”  I’d only been out in the Israeli air a few minutes. Was I already being insulted (on only a few hours of bad sleep, it sounded like Schlump, Yiddish for a slob ). It must be some sort of idiom (“bi-tuee,” in Hebrew.) I was out of ideas but it would have been rude to ignore the statement completely.

“Slee-cha?” (Excuse me?) I countered, making no secret (as if there had ever been one) of my American origins and limited Hebrew skills.

And I understood.  Avi — with a bit of a sly smile — was inquiring after the “peace” of President Trooomp.

But how to answer?

It is important first to consider the Geshtalt of “Mah Shlomcha” (or “mah shlom-aich” for addressing a woman.) To ask after one’s “peace”, as Israelis do, is to ask much more than the American, “Hi. How are you?”  Just as “Col Tuv” (everything [should go] well [with you]) is much richer and more heartfelt than the anodyne and robotic American, “Have a nice day.”  To inquire of a person’s Shlom (a contraction of Shalom) is to ask after a person’s holistic status — their mental status. What the “peace” of their mind is. Is it coping or is it troubled.  Is it focusing on those things that can be controlled…or is it chronically overwhelmed and over-heating?  Is it seeing and creating threats and enemies where none exist and which can therefore never be vanquished.

And here we come back to President Trooomp.  I thought about it before answering Avi’s question.  Sadly, Trooomp seems not to be endowed with “peace” of mind.  He seems not to be coping with the responsibilities of office.  Everyone who questions him is an enemy, “a very bad man”.  Hillary had evil in her heart (directed at him, of course.) All Hillary’s votes were fraudulent — although no independent election officials could find any evidence.  More people attended his inauguration than Obama’s — although the photos clearly demonstrate otherwise, as do the rides recorded on the Washington Metro.  The judges (appointed by Dems and Repubs) who ruled against him were “unprecedented” in their judicial overreach. Obama bugged his phone.  BUGGED HIS PHONE!!??  We may yet learn that Trooomp insulates his bedroom with tin-foil to thwart aliens.  At the very least to thwart the CIA — who of course doesn’t know anything about Russian intelligence operatives or Russian hackers.

And what of the “peace” of mind of the leader of the country who seems to have no human feelings for its citizens.  Even his supporters are just things, just props.  He promises them a job today but eliminates their health care insurance tomorrow.  Maybe Bill Clinton was too empathic, but does Trooomp care about anyone but himself?  It seems that he delights only in making brash (childish) claims and equally outrageous and simplistic promises — and then following through no matter what the cost or what the strength of the evidence that his plans will fail and or cause harm.  It is not unreasonable at this point to expect that Trooomp will be offering up unconstitutional travel bans for as long as he is in office. He’s like a 4-year-old who screams that he’s going to kill his brother who purloined a new toy or light his sister’s hair on fire for turning off the TV.  But this 4-year-old has the means to kill his brother and no compunction about burning his sister — and he continues to rant even after most 4-year-olds would have long regained their composure or forgotten any perceived slights. Recently, we learned that Trooomp is going to build that $40 billion dollar wall even if he has to gut the environment, housing subsidies, and (the agency close to my pwn heart) NIH, the jewel of American medical and scientific research (and a job-generator!) to do it.

On the road with Avi

“Avi, m-da-ber Evan Morris” (Evan Morris speaking).  The guy who does research on addictions, I said over the phone in Hebrew.  In our original trip from the airport, Avi had inquired and I had given him the rundown on my professional interests (also in Hebrew).  Avi, helped me with some of the medical terms (he was an EMT and ambulance driver for many years before opting for taxis).  I explained our work with brain-scanning people while smoking and the implications for treating addictions.  He asked the standard — but well-reasoned — question: are all addictions the same as far as the brain is concerned? Essentially, yes. To a dopamine molecule in the ventral striatum, everything looks like an addiction.  As often happens next, Avi admitted he had an addiction.  Sometimes, this is where long cab rides can get awkward.  Avi said he was addicted to adrenaline (and I breathed a sigh of relief.) Avi and ¾ of all Israelis are probably adrenaline junkies.  That’s why they drive electric bicycles on the sidewalks and on the streets at breakneck speed.  It’s why they bungee-jump and ride zip lines.  I told him so.  Avi said it took a long time after he quit the ambulance business before he could get it out of his system.  But he admitted that he still gets his fix.  He is an addicted fan of Maccabi Tel Aviv (soccer) and he made it clear that even if we find one, he does not want a cure.

After two days in Tel Aviv I was moving on to Jerusalem for Friday’s Jerusalem Marathon (my goal was to improve on last year’s time in the 10K.)  I had spent my time in Tel Aviv walking the board walk to Yaffo and back.  I had dinner with J– at Ha-Zaken v’ha-yam (The Old Man and the Sea) in Yaffo.  The waiters served the two of us so many different salads (carrots, cabbage, Humus, tabouli, pickles, tomatoes…) they had to use the next table for the overflow.  Then (after we were stuffed) they brought the fish.  You have to pace yourself when you eat in Israel.  Thursday morning was spent on a business meeting in a cafe on the beach in Tel Aviv and a large “Ha-fooch” (meaning “flipped”, it’s the term for a Cappuccino).  When I got back to the hotel to check out, that’s when I called Avi.

At about 4 p.m. on a Thursday afternoon, we set out for Jerusalem.  For perspective, this is like trying to drive to NYC from New Haven at 5 p.m. on Friday. – with summer construction!  Thursday is the end of the work-week in Israel and everyone is leaving town.  And even when it’s not the weekend, between Tel Aviv and Jerusalem there are always more cars than there is road.

“Yesh li kamma bakashot” (I have some requests), I told Avi when I got in the taxi.

“Rak Shalosh” ([You] only [get] three), said Avi, the sly smile reappearing.

First, I need to pay by credit card, I said, and second, I’d like to make a stop on the way to pick up my t-shirt and number for the race. The number pickup was being held at the Payis Arena Jerusalem near the Malha Mall and the Soccer stadium.

Traffic was bad. But I knew that the hotel room was booked and the number pick up was on until 9 p.m.

“Ani lo b-mahare”, I tried tentatively to say that I was not in a rush. The prefix b- translates to “in”.

“Gam Ani lo m’mahare.” (Also I am not in a rush), Avi cemented my lesson while at the same time describing his own “peace” of mind.

In the middle of the drive, Avi stopped for gas. He greeted the attendants at the gas station warmly.

He disappeared into the convenience store.  When he returned, he offered me the contents of his bag.

I reached in and claimed a chocolate bar.

Avi pointed out the name on the wrapper and asked me if I knew what it meant.

“Pesek-zman” means “Time out,” he told me before I could answer. (Purists stand down, it means Break-Time)

“When you eat it, you have to take a break,” instructed my guru.

And we sat back in Avi’s taxi, in the rest area, on a Thursday eve, and took a break

About the Author
Evan D. Morris is a Professor of Radiology, Psychiatry, Biomedical Engineering at Yale University in CT, USA. Like most Israelis, he has friends on the right, left, and center of the political spectrum, as well as those who are secular and religious. He speaks Hebrew... just enough to get into trouble. He was a Fulbright Scholar in the winter of 2015/16 at Hadassah Hospital, Ein Kerem and lived with his family in the German Colony. He maintains scientific contacts and collaborations with colleagues in Israel and tries to visit Israel regularly. His goal is to break 1:05:00 in the Jerusalem 10K.
Related Topics
Related Posts
Comments