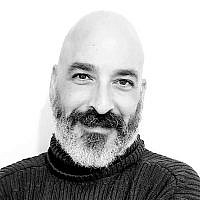 The Blogs
Adam Lairch
Apply for a Blog
Advertisement
Please note that the posts on The Blogs are contributed by third parties. The opinions, facts and any media content in them are presented solely by the authors, and neither The Times of Israel nor its partners assume any responsibility for them. Please contact us in case of abuse. In case of abuse,
Report this post.

The story of Israel is amazing and that is why it hurts my soul to see all of this anti Israel rhetoric. It is unjust and comes from those who are ignorant to the facts, the exact same people those who are against Israel placate to. The idea a guy like this Mark Lamont Hill, formerly of CNN and presently of Temple University, could have a forum at the UN is unheard of by normal standards, especially given the story of Israel.

Please find a country anywhere in time that has pulled itself up from the ashes of destruction, resurrected an extinct language, (Hebrew), excluding prayers after 2000 years. The only true help received was primarily from donations provided by Jewish people by way of money and or man-power. Today Israel leads the world in medicine, technology, science and agriculture in just 70 years.

The truth is we cannot go one day without using something that has Israel’s thumb print on it. Every time you take a selfie, thank Israel. Firewall…Israel. Waze, What’sApp, Israeli ingenuity. Bionics…Israel, ( I just saw a para-pelagic young man walk to accept his high school diploma on TV). THC the element in Cannabis that gets you high and CBD the medical element in cannabis that eases your pain, yup… you guessed it…ISRAEL. I can go on and on and on about the things we use every day but then it gets redundant. Israel provides for the world every day. How a country of 7 million people can out perform major European countries is mind blowing. We aren’t even talking about the first to respond for every major natural disaster, world wide.

The Jewish people didn’t just show up in Palestine after World War II from Europe. There had always been a Jewish presence in Israel, that is undisputed, (the Jews come from Judea like the Italians come from Italy or the Germans from Germany). The Jews were just unable to re recognize it until 70 years ago.

So, does Mark Lamont Hill have any clue what it took to resurrect a country and language from near extinction? For that matter does MLH have a clue about the history of Israel and how the “Palestinians” have found themselves in this position as perpetual refugees for the last 70 years. Here is just one example. In the 1920’s land sales to Jews in Palestine were very limited, thanks to the laws of Haj Amin el Husseini, the original fadayeen, (suicide groups) leader. The only lands readily available for sale were the swamp lands in the north in the Hula Valley. The lands were swamp and infested with malaria stricken mosquitoes, baron and deemed worthless. If those malaria ridden mosquitoes didn’t kill the stupid Jews the wild hyenas would, as the Arabs laughed all the way to the bank.

This is where Kibbutzim of Israel began. The newest Russian Jewish immigrants lived and worked together and through donation were able to import eucalyptus trees to irrigate the swamp lands. The mosquito problem was eradicated and the land was more than fruitful after 2 years, on average, of hard work. But those lands were stolen when you ask MLH or any of the other lesser informed self righteous zealots that seem to have an opinion on everything.

The truth is in 1948 when the UN voted on the partition plan it was Israel who was more than willing to share what little piece of the pie that had so graciously received and it was the Arabs who were against it. So much so that el Husseini on the instruction from other Arab states, mostly Iraq, were told to leave and let the other 5 major Arab army’s destroy the Jews and the “Palestinians” should only return when the last drop of Jewish blood was spilled in the sand. Israel prevailed but they lost East Jerusalem.

So Mr. Hill do you have any clue what happened to the land owners that were Jewish living in East Jerusalem? They were evicted and their belongings looted through by the “Palestinians”. In Egypt, Saudi Arabia, Iraq, Iran , Afghanistan, etc. If you were a Jew you were told to pack and be out in 24 hours, “don’t care where you go, but you can’t stay here, go to Israel.” Didn’t matter that the Jews helped develop these countries over the last 2000 yrs. But now the Jews had a place to go! There were more Jewish refugees from the Middle East in 1948 then there were displaced Arabs from Israeli statehood and please remember they had left based on the advise of other Arab leaders?

So lets fast forward 70 yrs. Israel had been sucked into war in 1958, 67 and 73, (I am excluding all the flair ups with the PLO, Hamas and Hezbollah). Israel has successfully defended herself against attacks, has contributed to the growth of the world through High-Tech, leading the world with medical breakthroughs regarding Cancer, Parkinson, Alzheimer, Stem Cells research and has given us the Cherry Tomato, (how can you hate someone who gave you a cute, bite sized tomato?). To groups with refugee status and look how one rises up and the other remains a victim.

Mr. Hill, Israel is home to 1.8 million Israeli Arabs, 77% of which choose to be governed by Israel and some even serve in the IDF defending Israel against other Arabs who wish to destroy her. How come they aren’t protesting, throwing rocks, igniting kites with fire in the hopes of destroying fields or green houses, how come they don’t dig tunnels or blow themselves up without any remorse towards innocent lives lost? BECAUSE THEY ARE FREE! They don’t say Israel is a racist country, they don’t say Israel is an apartheid state, (which is a real insult to those who lived through that is South Africa) and they for sure don’t call the Knesset members Nazi’s, (which is an insult to all the Jews after understanding the Holocaust).

Gaza? Gaza was given to the Arabs as a piece offering. Mr. Hill, what have the Arabs given towards peace? The “thank you” is constant rocket fire at civilians and terror tunnels? Mr. Hill, can you please find me a country that has ever given land for peace because Israel has done it twice. The Palestinians are their own worst enemy and if you want to free them then get rid of the P.A. and Hamas. Israel is the only one who provides for them not their corrupted governments. Not there other 22 Arab nations in the middle east. .01% of the Mid East supports the “Palestinians” and yet you claim that .01%, the only democracy in the Middle East is the problem?

But the point that I find most ironic is that you are what would be considered and “African American” What did you do to help those who were plagued by famine or over run by rebels in the mid and late 80’s Africa other than buy the “We Are The World” cassette and a sweatshirt? I will tell you what the racist regime of Israel did…They rescued over 14,000 Ethiopians with Jewish descent and relocated them and absorbed them in Israel. It was a dramatic 2 day operation named “Shalom.” Just one more example of what Israel does right! What happens to the over 14k Ethiopian refugees if there was no Israel? If there was an Israel during World War II, 6 million Jews are not systematically murdered by the National Socialist Party of Germany. Today there would be over 800 million Jews, not 13 million, world wide, (ironically there were approximately 13 million Jews, world wide at the start of WWII).

Mr. Hill, give your neighbor a new home. Give him gas, electricity and water and don’t charge him. Truck in supplies and goods by the ton. How long will you put up with him terrorizing you, your children and your guests before you build as fence and exclude the neighbor? God forbid one of your children is killed by the neighbor, what would you do because this is the Israeli dilemma. If the neighbors put down their weapons their would be peace. If Israel put down hers there would be no more Israel. So by what means are we actually talking Mark, from the river to the sea, Palestine will be free. This is nothing new for 70 years?

What is new and a bit ironic is that in the 1920’s and 30’s the Jews were told to leave Europe and go home. No we are home and leading the world and we are told we can’t stay here either?

In closing, dude, you are an antisemitic, misinformed crusader who is on the wrong side. I suggest reading some books like the Exodus by Leon Hess. Or The Start Up Nation by Dan Senor and Saul Singer.

I would also suggest if you want to continue this approach to drop one of the name because as far as other 3 named self righteous, zealots who are members of the democratic party go, there isn’t a happy ending:

About the Author
The alarm clock goes off for another on a November morning in 2007 and I need to begin my daily routine. Out of |frustration I just exclaimed that there has to be another way. With that I checked my emails and there is a message from Nefesh BNefesh and I thought, "No way, was this the answer"? My profession at the time was in Diamond Sales and figured this move to be a no-brainer. What I didn't figure was the economy being so poor that there was no work in the industry within Israel. I had to learn a different trade after moving all this way. That hasn't been a bad thing either. What I have come to realize is this, if you are not passionate about your job you will not have success. I am passionate about Israel and the gifts that have been provided to me since moving here. I want to share my experiences and convey my life lessons. To provoke debate and inspire change!
Comments