What is it that inspires some people to become volunteer EMTs, to join a brotherhood where people drop everything and rush out to save the lives of others at a moment’s notice? In truth, the answer is often very personal and is different for each and every volunteer. In the case of the following story, the answer incorporates both the volunteer’s past and future. That to me is one of the most inspiring things. Learning from the past and using to change the future for the better.

Each year in the middle of March, Hami Erlenger (26) remembers the moment that changed his life forever. Erlenger, who is married and the father of three, is an event photographer by profession. When he is not busy photographing weddings and family celebrations, he volunteers as an EMT for United Hatzalah, Israel’s national pre-ambulatory EMS response organization. Like all of the 3,200 volunteers of the organization, Erlenger goes about his daily life until he receives an emergency call from the dispatch center, upon which, he drops whatever he is doing and rushes off to save the life of someone whom most often, he doesn’t know. 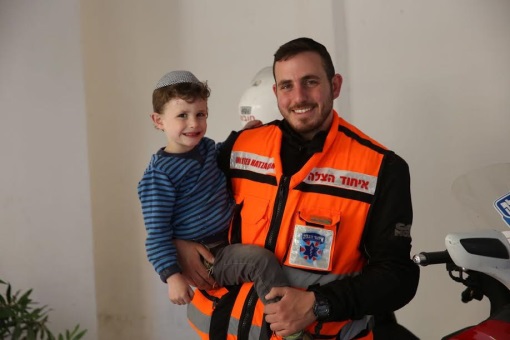 Hami Erlenger with his son.

“Our goal is to save lives and arrive before the ambulance in order to provide emergency first aid in the precious first minutes after an emergency occurs,” said Erlenger.

“It all began for me when my neighbor died of a heart attack,” explained Erlenger. “At the time, I was participating in a basic first-aid course to enrich my own knowledge so that I would know what to do in the case of an emergency. The day that my neighbor’s heart attack occurred, I was at home and it took me a long time to realize that an emergency was occurring right next to me. I walked outside of my house and realized that my neighbor had died next door to me. Other neighbors told me about the incident and relayed that the family had waited a very long time for an ambulance to arrive. I thought how sad it was that I didn’t know about the incident because I could have given my neighbor CPR in the interim. Had I known about the emergency, my neighbor would still be with us today. I knew then that I needed to join United Hatzalah because where I live, emergency response takes a long time and I can make a difference and provide emergency response for a lot of people around me.” 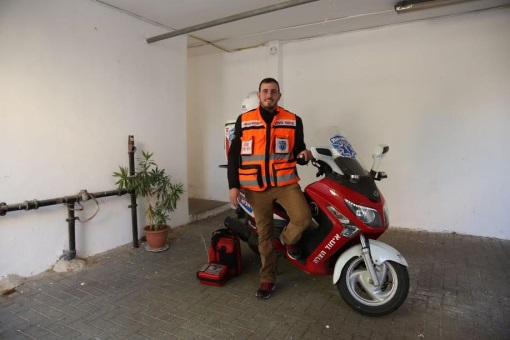 Erlenger signed up for an EMT training course and began providing emergency first response for his neighborhood in Netanya. “Since I have begun volunteering with the organization I have treated dozens of CPR cases and provided others with life-saving treatment that they needed in times of distress and among them are some of my friends and family members. I’ll never forget the incident which occurred just six months ago. My wife called me and told me to rush over to the park near our house. Our youngest child, Harel, had fallen off of the jungle-gym and hit his head on the ground below. I ran over and began treating him, my own son, until the ambulance arrived and we could transport him to the hospital. Other volunteers from United Hatzalah also arrived and I was overwhelmed with emotion at knowing that other members of my community were caring for us. I receive a lot of pride knowing that I am also providing that same level of care for my friends, my neighbors, and my community. That is more valuable to me than anything else.”

Eli Beer, Founder and President of United Hatzalah said “Hami is one of our many highly qualified volunteers. He together with another 150 volunteer EMTs, paramedics, and doctors, give of themselves and sacrifice their time and energy to provide emergency medical response to the Sharon area. It is due to the dedication of volunteers such as these that we are able to save so many lives in Israel. They are the true heroes of our time.”