This week’s parasha, Beha’alot’cha, begins with the construction of the menorah, the seven-branched candelabra, as part of the tabernacle. The menorah had to be made entirely of gold, from its base all the way to its top. As we all know, the menorah went on to have great symbolism to the Jewish people, from the tabernacle to the Temple until today. One thousand years later, the menorah took on an additional significance in the story of Hanukkah.

For years, the menorah has provided the Jewish people with light. It is not just in the original Temple or in the story of Hanukkah that it has given us light, but throughout our history, starting with the construction of the tabernacle.

As I thought about the fact that the Jewish people in ancient times looked to the menorah for light and inspiration, I considered who we look up to today.

I give several lectures on musical topics. One of my favourite, and most popular, lectures, is entitled Jewish Rock Stars. I first presented a few years ago at Toronto’s Jewish Music Week and subsequently in a number of venues. In my lecture, I mention some of our great popular Jewish singers and musicians, people like Bob Dylan, Neil Diamond, Gene Simmons, Paul Stanley, David Lee Roth, and others – people many of us look up to. Then I remembered a book I bought several years ago about Jewish stars, not just music stars. It’s entitled Stars of David: Prominent Jews Talk About Being Jewish by Abigail Pogrebin.

Some of the people interviewed in this book include Steven Spielberg, Dustin Hoffman, Kenneth Cole, Nora Ephron, Richard Dreyfuss, Gene Wilder, Mark Spitz, Stephen Sondheim, and so many more. Like many others, I am proud to identify Jewish stars – in whatever field. So I bought the book.

After reading it, I have to tell you that I couldn’t help but feel disappointed. Let me give you some excerpts.

I… heard the ignorant rabbi giving his views on the Vietnam War, and I wanted to get up and start hollering at him… That’s the last time I went to a temple.

Nora Ephron on her Jewish identity:

At this point, it doesn’t make the top five of what I would say about myself, and it probably never did.

My identifying with this entity and my fulfilling the rituals… that has ended.

I think there’s an ultimate spirituality and morality that keeps the universe balanced and in harmony. But I don’t know if any of that requires reading the Torah…

So many of the people in this book acknowledge their Jewish identity but not that many have succeeded in or cared about keeping it active in their lives. Similarly, not many have passed Judaism along to their children.

One of those interviewed in Abigail Pogrebin’s book is clothing designer Kenneth Cole. Cole says:

Our prophets wrote that we will always be ‘a light unto nations.’ The prophecy as to the breadth of the Jewish nation has so far proven to be true; …the Jewish nation is the only one to have experienced and survived in exile twice,… and few would doubt that the Jewish world has also had an extraordinarily positive impact on the morality of the entire civilized world.

A Light Unto the Nations, Unto Us

If, as the prophet Isaiah, says, the Jewish people are to be “a light unto nations” then who is to be a light unto us?

Leave God aside for a moment and consider the society we’re in. Who do we look up to? We look up to our stars. Whether or not you do, we, as a society, certainly do.

Our parasha teaches us that not just anyone could handle the menorah. Only the Levites were permitted to touch it. And in order to perform their duties, the Levites had to go under a thorough process of cleansing and purification.

Sprinkle on them water of purification, and let them go over their whole body with a razor, and wash their clothes…

Thereafter the Levites were qualified to perform their service in the Tent of Meeting, under Aaron and his sons.

No, celebrities are not performing a sacred service. They aren’t to be held to the same standard as the Levites in Biblical days. However, so many of us do look to these public figures as inspirations. But, as talented as they may be, as inspiring as they may be in their own fields, if we look to them to affirm our Jewishness, we may well be disappointed.

One of my favourite pictures from my youth is of me and my late grandfather on Hannukah. My grandfather’s name, incidentally, was Nissim, meaning miracles. He was named Nissim because he was born during Hannukah. This photograph has me – at 11 months of age – and my grandfather lighting the menorah (specifically a hannukiah) together. I’m reaching as high as I can in nothing but my diapers and we’re both holding the same candle. Looking back on it, it’s quite a beautiful moment to have captured in a photograph.

The menorah is an inspiration and reminder to Jews everywhere of who they are. If the light of tradition and of continuity is to shine brightly, we should be mindful about who we reach out to for inspiration. Stars of David aren’t always on a screen or in a book but often in our very homes. 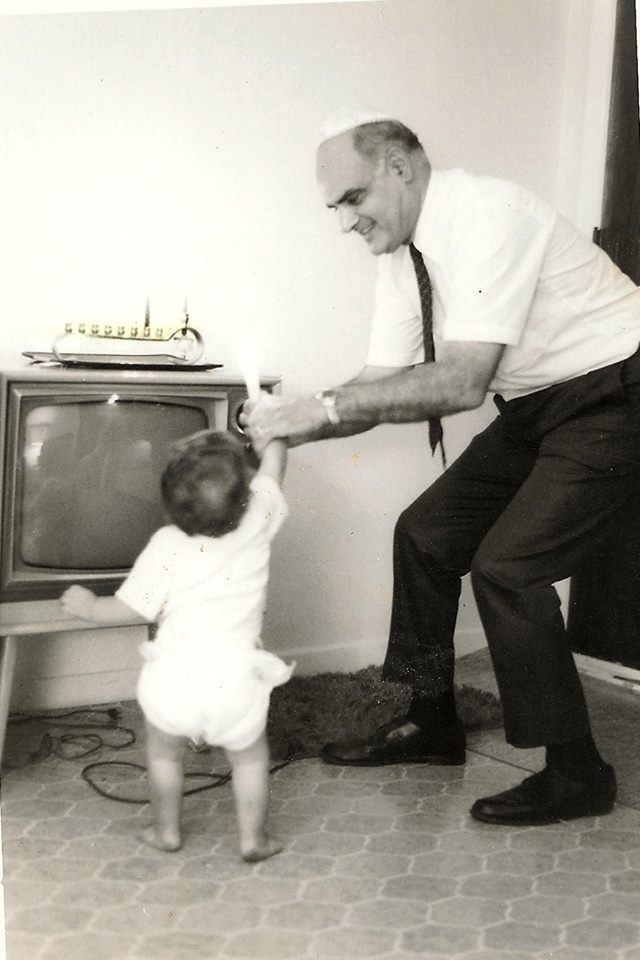