Just as every serious Jew exerts himself to pray three times a day, keep kosher, and guard the laws of family purity, he should certainly also strive to perform the all-encompassing mitzvah of living in Eretz Yisrael. True, packing up one’s family and one’s belongings, and moving to the Land of Israel is a mitzvah of gigantic proportions, dwarfing all other mitzvot, but the capability of raising ourselves to this exalted level of Emunah (faith in G-d) is our genetic heritage from our forefather, Avraham, who was commanded by G-d to leave his country, his homeland, and his father’s house, and journey to the Holy Land, the only place on the globe where the Nation of Israel can fulfill its Divine mission of bringing the word of G-d to the world, as the Prophet Isaiah declares, “For the Torah shall go forth from Zion, and the word of G-d from Jerusalem” (Isaiah, 2:3).

Rabbi Kook taught that it was not an accident that when the Jews left Egypt, before entering the Land of Israel, they had to kill the King of Heshbone. The Hebrew word “Heshbone” means to make an accounting. Rabbi Kook said that in order for a Jew to come to Israel to live, he first must kill all of his accountings, deliberations, reasonings, and worries, whether about learning a new language, or making a living, or serving in the army, and simply come with a firm faith and belief in G-d.

When someone wrote Rabbi Kook, asking if it was a mitzvah to settle in Israel, Rabbi Kook answered, “I am amazed at the question. How can one possibly have a doubt about this fundamental principle? We plainly see throughout all of the Torah, the Prophets, and the Oral Torah, the immeasurable devotion to Eretz Yisrael, to its settlement, its acquisition, and its building.” Rabbi Kook continued his lengthy 24-page response by citing hundreds of verses from the Torah, Scriptures, and the Talmud expressing the Jewish People’s eternal bond and commitment to Eretz Yisrael (See, “Hazone HaGeula,” Pgs. 10-34).

The Torah giant, the Ramban (Nachmonides) writes that the commandment to settle the Land of Israel is a positive mitzvah, one of the 613 commandments of the Torah. He explains that we are commanded with two duties: first, to possess the Land through conquest, and secondly, to dwell in the Land.

Rabbi Tzvi Yehuda HaKohen Kook would often explain that the Ramban clearly determines that conquering and living in the Land of Israel is the milchemet mitzvah of the Torah. This obligation continues in every generation, as the Ramban emphasizes three times in his “Supplement to the Sefer HaMitzvot of the Rambam,” Positive Commandment #4:

“This is what our Sages called milchemet mitzvah… and don’t err and say that this precept is the commandment to vanquish the seven nations…This isn’t so…This Land is not to be left in their hands, or in the hands of any other nation, in any generation whatsoever.”

“Behold we were commanded with conquest in every generation.”

“This is a positive commandment which applies in every time.”

The Ramban also emphasized that the commandments only reach their full value when performed in Eretz Yisrael, saying, “The essence of all of the precepts is that they be performed in the Land of Hashem” (Ramban on the Torah, Vayikra, 18:25).

So central is the Land of Israel to the true and proper observance of the Torah that Jewish Law rules concerning a husband and wife living in the Diaspora, that if the wife wants to move to Israel and the husband does not, then the Jewish Court forces him to grant her a divorce and give her full divorce payment as set forth in their Ketubah marriage contract. If he wants to go on aliyah to Eretz Yisrael and she does not, then she must agree to a divorce with no Ketubah payment (Shulchan Aruch, Even HaEzer, 85:3).

In summary, as Rabbi Elazar Azkari writes in the “Sefer Haredim,” “Every Jew must cherish the Land of Israel and flock to her with a great yearning from the far corners of the earth, as a child rushes to his mother’s embrace, for our initial transgression, which caused us of tribulation for generation upon generation, was in our rejecting the Land, as it says (of the Spies and the generation of the Wilderness), “They despised the pleasant Land” (Tehillim, 106:24).

May it be the will of the Almighty that all of our brothers and sisters still lingering in the lands of the exile will speedily hear the call of the Torah, the Prophets, and our holy Sages, and hurry home to our Holy Land. 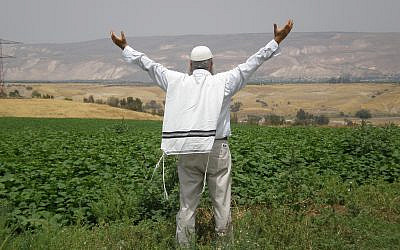