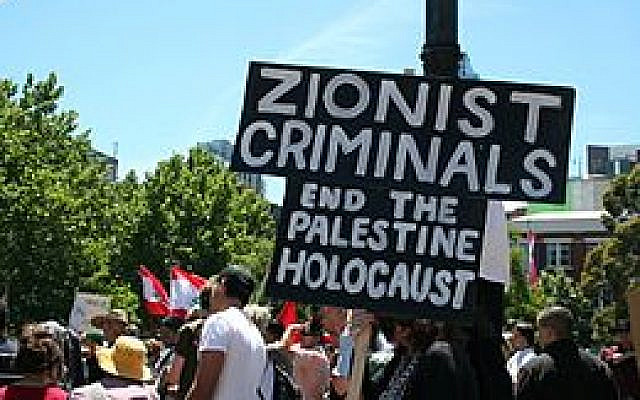 Protest the Gaza War in Melbourne (2009)

In our current #UpsideDownWorld, we have allowed and come to accept, in the common parlance, that characters like Ilhan Omar, Jeremy Corbyn, Rashida Tlaib, Bernie Sanders, Linda Sarsour and Tamika Mallory, Noam Chomsky and Louis Farrakhan  are “progressives” and “liberals.”  It is time that Jewish and fair-minded spiritual, lay, media and advocacy leaders call out that these people are neither progressives or liberals, but Jew-haters using a liberal agenda for cover. It is time to redefine the narrative and not let them get away with calling themselves progressives, liberals or even Democrats, for that matter. When Democratic leaders endorse these Jew-haters, it sends child down my spine, not enough to leave the party, but to fight to try to help find the party find its moral compass again, knowing Jew-hatred exists in both parties.

Like wolves in sheep clothing, these Jew-hater insurgents have found a home in the Democratic party by professing and endorsing important progressive and liberal planks, with which I agree, except one which contradictions everything that real progressives and liberals believe. That is the problems of the world must be blamed on Jews and Israel, which is neither “progressive” or “liberal.” It is, in fact, as, religiously, racially and ethnically intolerant, if not genocidal in some cases, as the the religious, racial and ethnic injustice against them they rightly fear and sadly experience, except they focus in on Jew-hatred and there is nothing progressive or liberal about that at all.

In fact, it is, what the late Robert Wistrich, in his work on Jew-Hatred, called, “The Longest Hatred,” meaning just that and that it is ingrained traditionally and conservatively in many religious, racial and ethnic cultures, history and tribal aspirations.

Whether from the biblical exiles of Jews from their homeland and enslavement in exile to their persecution as Christ-killers in the Middle Ages by Crusaders, to the pogroms and Holocaust in Europe in the 20th century and now with a state surrounded by thousands missiles pointed at every city, village, kibbutz and field with mounting incursions to terrorize and elevated violent and desecration acts  of Jew-hatred recorded throughout the world with the recent racial strife pandemic, no matter how you slice it, Jew-hatred is on the rise and creeps into the main stream narrative to cause pain and suffering, misunderstand and division.

The latest iteration of  Jew-hatred has come from a number of post 1967 factors which include but are not limited to:

1) the fact that Israel decisively and heroically won a war against incredible odds and the world had to adjust Israel as being a notable military presence capable of defending itself by maintaining a decisive military edge and that Jews were capable of winning a fight against annihilation,

2) Though Israel won the war and were willing to trade land for peace, her enemies have had a continuous state of declared war and continually wage it at every opportunity causing Israel to be stewards of the disputed territories as their enemies perpetually decry any “normalization,” or recognition and want “from the river to the sea” thus causing an impossible stalemate and disputes over necessary security measures to save lives on both sides of disputed boundaries,

3) historical revision of the history of the Middle East being served up by a growing incursion of anti-Israel academics on college campuses being heavily funded by special interests who are sworn enemies of Israel. These narratives reinforce ancient negative stereotypes about Jewish money, lust for control and power, duplicity, blood libel and racial inferiority.

4) Finally, in the age of social media, from an age of “if you see it in writing it must have some validity” the rise of the validation of instantaneous conspiratorial and frequently false and hateful narratives where facts, history and narratives become intersectional, confabulated, distorted, radicalized to the point where meanings are turned upside down and inside out, right becomes wrong and truth becomes #fake news. Examples of such narratives would be “Zionism=Racism,” ” One can be anti-Israel without being antisemitic,” ” The Jewish state is an apartheid state.” “The Palestinians are the Davids to the Israeli Goliaths.”

All of these factors have become acceptable in modern civil and academic discourse resulting in BDS efforts and calls for reduction in security aid to Israel from increasingly insurgent government leaders elected to Congress under a “progressive and liberal banner” led intellectually, sadly by Jewish academics and politician such as Noam Chomsky and Bernie Sanders, who quite frankly like many other Jews have had it to good and been too comfortable and success in this country and have forgotten the existential danger from the longest hatred of Jew-hatred and have somehow aligned themselves with enemies of the Jewish people and the Jewish state and have become their heros by hiding liberal causes and yet calling for the punishment, containment and holding accountable Jews because they simply want to exist.

These useful idiots of our enemies give permission to spread the poison of Jew-hatred and it is once again taking hold in the times of  Trump, whose strategy has been to capitalize on divisions to conquer his monstrous self aggrandizing, racist, bigoted agenda, creating an insurgency of similar reactionary thinking and home in the opposition party.

Those of us who are Children of Holocaust Survivors may be sadly glad our parents are not alive today to see this resurgence of Jew-hatred in the American political mainstream, but it’s here and we must hold both parties, the press and social media accountable by being accurate in correcting the narrative. Jew hatred is neither “progressive” or “liberal.” Never was, never has been, never will be.