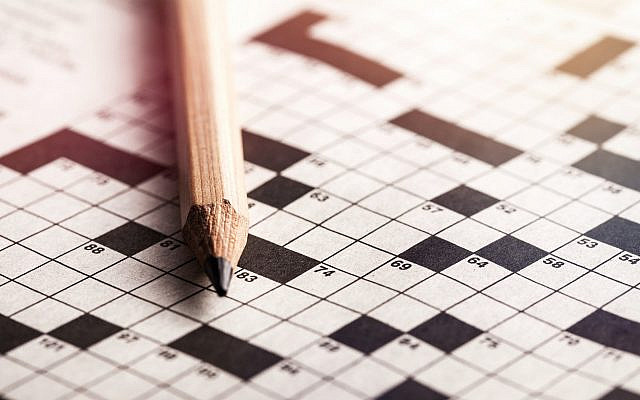 Happy Hanukkah, chevra! You probably know the classic scene in the 1942 movie “Casablanca” where the French police chief played by Claude Rains is pressured by a Nazi officer to shut down Monsieur Rick’s bar, where the band’s just played La Marseillaise and most of the patrons have joined in the singing. “I’m shocked, shocked to find that gambling is going on in here!” declares the cop, blowing his whistle just as the croupier hands him a wad of bills: “Your winnings, sir.”

So I’m shocked, SHOCKED, to learn The New York Times chose to mark today, this morning, now, the beginning of the Jewish holiday of light and freedom, Hanukkah, by configuring its daily crossword puzzle in the shape of a swastika— the emblem of moral darkness and human enslavement. Let’s remember whom we’re dealing with. The Times regularly defames and demonizes Israel, the paper that published its first-ever article in Yiddish in order to slander Yeshiva education. (The latter is part of a generalized assault on the city’s Orthodox and Hasidic communities.) Why not choose Hanukkah to show the Times’ true colors? Now, gentle reader, let us indulge ourselves: What if today’s New York Times were published in World War II? Here goes…

As news of the Warsaw Ghetto uprising reaches West 43rd Street, a Times editorial severely censures “provocative behavior” by Jews against the Nazi “peacekeeping forces.” It decries the Ghetto itself as a “settlement” in violation of “international law” and welcomes German reduction of its size. It notes that despite these territorial concessions, which advance the peace process outlined by Vidkun Quisling in the “Oslo agreements”, Grand Mufti Husseini is still asking Western academics to boycott, divest, and sanction— a call that has met with enthusiasm at Columbia, Harvard, UC Berkeley, and other bastions of human freedom.

A thoughtful Op-Ed by the German chancellor outlines his plans for a new, united Europe and deplores Churchill’s “unreasonable and destabilizing Brexit” policy, to which the Luftwaffe is offering a “measured” response. In the little italic box below the article, Mr. Hitler is described as “a statesman and motivational speaker”.

Following the attack by Japan on Pearl Harbor, the Times urges a policy of “restraint”.

The Sunday Travel section runs a colorful piece on hotel and dining bargains available in Paris since the change of management of the summer of 1940. It warns tourists against motoring in the countryside for the time being, though, because the roads are strewn with destroyed vehicles and dead Frenchmen. But the author reminds travelers that Germany’s spanking new Autobahnen are open for business, with exciting additions planned “nach Osten”. And the Reich’s trains are running, too. Aren’t they ever! Road trip!

On June 22, 1941, the Nazis invade the Soviet Union. An investigative reporter from the Times suggests this may just be a ploy by Putin, I mean, Stalin, to garner sympathy and thereby influence the upcoming US presidential elections. And besides, didn’t Mrs. Roosevelt eat her salad with Russian dressing at a state dinner the other night? There’s your first clue, Sherlock! The Times deplores “unnecessary violence” in the USSR on both sides but warns its sophisticated readers that reports of the “youthful exuberance” of the Einsatzgruppen in the Ukraine and elsewhere are being exaggerated by the Russians, some of whom have even met officials of the Administration, which is what we should really be more concerned about.

Following pressure by the Times and its friends, Lend Lease is suspended and Roosevelt is impeached. Moscow falls. Germany invades Britain. As the Wehrmacht’s first amphibious wave hits Manhattan and Japan takes over the Cal campus, the Times welcomes diversity and multiculturalism, and runs an article in the Metro section on a hip new eatery in Brooklyn that features beer, sausage, and sushi. But remember, “Aryans only :)”

It’s Morgen in Amerika. The editors of The New York Times take the elevator up to the roof on West 43rd Street, haul down the Stars and Stripes, unfurl the red, white, and… black banner they’ve loved and served all along, extend their right arms in a salute to the Führer, and sing the Horst Wessel Lied.

About the Author
James R. Russell is Mashtots Professor of Armenian Studies, Emeritus, at Harvard University, and has served as Distinguished Visiting Professor of the Hebrew University of Jerusalem, Associate Professor of Ancient Iranian at Columbia, and part-time Lecturer in Jewish Studies and Biblical Hebrew at California State University, Fresno. He serves on the Editorial Boards of the journal Judaica Petropolitana, St. Petersburg State University; the journal Linguistica Petropolitana, Russian Academy of Sciences; and the journal Homo Loquens, Russian Christian Humanities Association, St. Petersburg. He is a founding member of the International Association for Jewish Studies, chartered in the Russian Federation. He holds the PhD in Zoroastrian Studies, from the School of Oriental Studies of the University of London; B.Litt. (Oxon.); B.A. (summa) (Columbia). His recent books include "Poets, Heroes, and Their Dragons", 2 vols., UC Irvine Iranian Series, 2020, and "The Complete Poems of Misak Medzarents", CSU Fresno Armenian Series, 2021.
Related Topics
Related Posts
James R. Russell