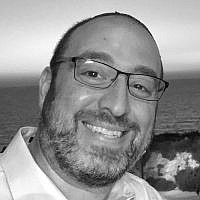 The Blogs
Laurent Bensimon
Apply for a Blog
Please note that the posts on The Blogs are contributed by third parties. The opinions, facts and any media content in them are presented solely by the authors, and neither The Times of Israel nor its partners assume any responsibility for them. Please contact us in case of abuse. In case of abuse,
Report this post.

Going into this Passover, we knew things would obviously be different. For those reading this in the distant future, it was Wednesday, Passover eve, 2020/5780 and the entire country of Israel was on lockdown due to COVID-19, whose numbers were still swelling despite weeks of increasingly severe degrees of isolation and quarantine. When your immediate family is thousands of miles away, celebrating the seder with dear friends is always bittersweet but never disappoints as we laugh, share stories, recount the miracles, and engage the children around the table while feasting on delicacies and imbibing wines produced in our beloved nation.

Given we would be limiting the seder to our nuclear family, our preparations were a bit more modest, as venturing out and finding certain basics (read eggs) was more challenging this year than in years past. Nonetheless, our table looked majestic with the seder plate taking center stage, embellished by improvised decorations in the form of blue scarves and Lego ™ people crossing a split (silken) sea. The aromas from the kitchen promised a feast as did some fudgy brownies and crispy triple chocolate biscotti treats to be washed down with the afikoman of shmura matza delivered by the local Chabad (one less item to track down).

Right before powering down our devices for the 25 hour holiday, my wife pulled me aside and shared a remarkable story from our communal Rabbi, Rav Chanan Atlas. In a heartwarming gesture by the city of Tel Aviv, the municipal building was lit up with the message “We Love you Bnei Brak” in a show of solidarity with the latest COVD-19 hotspot.

His message continues:
“I was moved by the gesture because our society was on the verge of falling into a vicious blame game. We were almost there. We could have blamed Bnei Brak for its poor situation and we would, most probably, be right. Right but at terrible distress. We could have fallen apart turning in a fragmented society.

“Instead, the showing solidarity and empathy overcame any sign of division and hatred. Almost instantaneously, the moment the gravity of the situation was understood, Charedi society fell in line with the rest of Israeli society and is now complying with Misrad Habriut’s (Ministry of Health) guidance. The non-Charedi society stopped criticizing Charedim almost at once and shifted immediately to a loving and caring embrace.”

With that message top of mind and the sun starting to dip below the horizon, I went to my balcony (mirpeset) in search for a quiet place to pray afternoon (Mincha) and evening services (Arvit). There were some questions raised as to whether or not the someone odd practice of reciting Hallel after evening services on the night of the seder. I say odd because it’s the only day of the year we recite this special prayer at night after services and then repeat it again as part of the Seder, but I digress. While reciting Hallel, I could hear others in the distance reciting Hallel as well, occasionally hearing multiple people singing along together—definitely not an everyday occurrence in a town like Raanana with a mixed population of observant and non-observant Jews. I thought of my aunt in Bnei Brak that was spending her first Seder ever alone but smiled knowing that she would also be surrounded by a cacophony of prayers reflecting the myriad customs of the ashkenaz, sephardic, and Chassidic inhabitants of the enclave.

While this experience itself was moving—so moving in fact that I felt hot salty tears streaming down my cheeks—it in no way could have prepared me for what happened a short while later. We sat down for the Seder, which I prefaced with a few words about how blessed we were to have this opportunity to be “alone” with our nuclear family, allowing us time to explore our personal thoughts about the holiday with a depth and richness seldomly afforded at a crowded seder table. And with that, we kicked off the festivities and the kids relished the special treat of Kedem grape juice, a familiar taste from the Old Country that my wife had procured just in time for Pesach. Stories were being shared, kids and adults were leaning to the left as proscribed when raucous voices were carried in on the cool breeze from our window. We paused and listened before clumsily retreating to the balcony to determine their source.

Once outside, we were greeting by scattered singing of the Four Questions (Ma Nistana), as neighbors were on their balconies and in their front yards singing away the isolation. Before long, others joined. We looked over when we heard our neighbor come out on their balcony—husband and wife dressed in white, a kippah on a head usually not covered—and together represented our building in this magical moment. While it wasn’t quite as beautiful as some of the videos making the rounds on social media of blocks of buildings singing in unison and truly celebrating together from their respective balconies, it was the most heartwarming and unifying moment of my time in Israel; we were all “in it together” and would prevail as we had for thousands and thousands of years, in the face of threats much graver and most motivated than this virus. This lack of unity that had been our undoing historically felt vanquished as we united in song.

After the 4 Questions were completed, there were shouts of “Chag Sameach” to and from random inhabitants that could and—mostly—could not be seen but only heard. Before the moment passed, one last song started, something we all kne w (surprisingly) and that didn’t vary based on your background, religious observation, or political affiliation.

That night, the Moshiach came to Raanana

About the Author
Laurent Bensimon grew up in Maryland and relocated to Israel in 2014. Prior to moving to Israel, Laurent spent 15 years in the greater NYC area where he raised a family and was actively involved in Jewish education as a Treasurer and Board Chair for a local Day School. He’s also a special needs parent to a daughter with a rare genetic syndrome. He currently lives in Raanana with his wife and 3 kids.
Related Topics
Related Posts
Comments