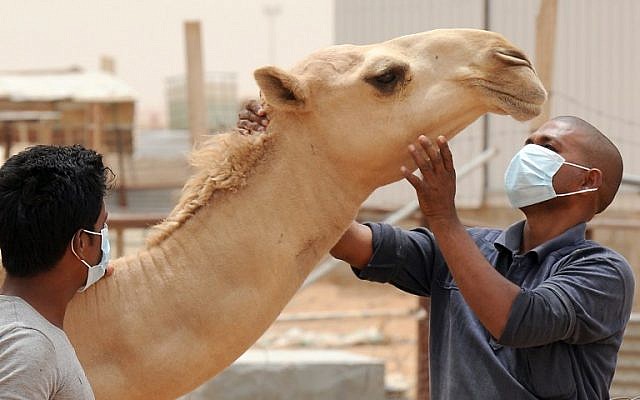 An Indian worker wears a mouth and nose mask as he touches a camel at his employer's farm, outside Riyadh, Saudi Arabia, on May 12, 2014. (photo credit: AFP/Fayez Nureldine)

When I was growing up, you couldn’t watch TV shows and movies online. In fact there wasn’t even a place to go and see episode summaries that included all the spoilers that you did or did not want to read. Your only chance for seeing your favorite shows was to actually sit down in front of the television [next to your pet dinosaur] and watch the program when ever the station broadcasted it. If you did manage to miss the show, your remaining hope was reruns. We didn’t know that any other options were available. I guess that’s how we survived this wasteland of online media. I should have warned you that during Hanukkah I tend to wax dramatic.

One of my favorite shows, or to be more accurate one of the most popular shows, on TV was the Bionic Man. For the paltry sum of $6 million, they rebuilt Steve Austin, a test pilot critically injured during a flight. Now with technologically implanted bionic legs, a right arm and a left eye, the Bionic Man was very much a superhero. Of course, unlike Superman or Wolverine, Steve Austin was a regular human being. The real superhero was the scientist who developed the technology for bionics.

There are many physicists, engineers and bio-technologists who chose their profession based on an early kindled passion that came from science-fiction TV shows and books and comics that demonstrated the power of technology. Since Krypton is very far away and we have not yet discovered the mutant gene, despite the Human Genome project, our only hope to achieve equivalent superior strength and skills is via technology. And this revolution  is happening as we speak.

I have previously discussed the modern version of bionics, and its already amazing successes. A dancer who had lost a leg in the Boston Bombing, danced on a bionic leg in front of a huge audience. Today’s bionics still do not match the technology as it was shown on the 1980’s TV shows. But almost every day, I read about a further advancement which will eventually lead to a fully functional, sensing bionic limb within the next 1 to 2 decades.

The latest bionic organ that I have seen discussed online is the nose. Our ability to smell is of course important to us, but it is not life critical. In most animals and even lower forms of life, the ability to smell can determine survival. Smell in animals can indicate home territory, a friendly or dangerous other animal, a prospective mate, safe food to eat and more. In humans, our enhanced frontal lobe capability offers us alternatives to these “nasal” functions. But the smell is nevertheless an incredibly powerful and useful tool that we can use to our great benefit.

I will take a moment and explain a bit about neurobiology. Basically, I want to explain how we smell and in fact, how we sense anything in our surroundings.

During the course of our bodies’ normal day-to-day functions, chemicals are constantly being produced. Some of these are in large quantities and some are in microscopic amounts. Although humans have lost a great deal of their ability to smell, i.e. sense, small amounts of chemicals,  animals such as dogs and cats still have this ability. When we are ill, our bodily functions change. Our bodies begin to release all types of specialized cells and blood-borne factors that help us  fight back against a disease. Although people tend more often to speak of the ability of animals to smell a disease like cancer, in fact, these animals are able to smell a whole variety of changes in our normal physiology. If we took the time to train these animals appropriately, they could indicate whether a person was depressed, had an pneumonia and many more conditions.

The technology behind the bionic or digital nose, is effectively the same as what you will see on a TV show like CSI. The police inspectors use advanced scientific tools to analyze the biochemical makeup of a piece of evidence. This analysis can allow the inspectors to distinguish between otherwise identical samples of blood, dirt and many more items. The key to the bionic nose was the miniaturization of this technology into a chip that is smaller than the tip of our fingers.

Once you have such a tiny detector, the next step is to use it to identify the unique chemical signals that are produced by a person with a given illness. At this point, it is almost as simple as a look-up table. In other words, a program would look at the list of chemicals detected by the chip, the amount of each of the chemicals detected, and then match up these data to a previously studied disease. The potential list of diseases that could be detected in this way most likely numbers in the thousands. And this list includes the big ones like cancer, heart disease, kidney and liver disease and more.

I have previously discussed the very active research into the creation of a true to life Tricorder. This concept device is from the TV show Star Trek, and allowed the physicians to diagnose a whole variety of diseases without actual contact with the patient. With the availability of a digital nose, a Tricorder becomes much closer to a reality.

On the basis of the various chemical signals that a person would produce, in addition to digital vision that could analyze the color of the skin and other dermatological signs, along with digital hearing that could pick up lung sounds and heart murmurs that indicated disease, a real life Tricorder could in fact make most diagnoses  without requiring contact with the patient. Using other existing technologies, like ultrasound, it truly should not be long before a person can be scanned at any given moment and totally in a noninvasive fashion.

These scans might be done on a day-to-day basis without the person even knowing it. They might be done every time you go to a doctor. In practice, once a Tricorder exists and also once the price is low enough to become practical to buy for home use, the actual need to go to the doctor’s office will be further dramatically reduced.

What I find especially fascinating, is that this technology was originally developed for defense purposes. You can imagine using such a technology to “sniff out” explosives and other hidden weapons, as well as potentially, the enemy (as their uniforms might have a different “smell” than the uniforms of the other army). The point is that this is one of a long list of examples where a technology that was originally created for defensive or destructive purposes, ends up becoming an essential part of our day-to-day lives [just like GPS].

There are more mundane uses to such a technology. It could be used to detect foods that are going bad or the point at which they cooked item is perfectly done. Such digital noses could therefore become a standard part of future refrigerators, conventional and microwave ovens. I imagine that once this technology is out in the wild, there will be many more uses for it beyond what was originally imagined.

Whether it is via bionics or the cloning of organs or some other technology, we will soon be able to return functionality to people who have lost it for any number of reasons. All of these technologies are stepping stones along the way to a much healthier and safer world. As a physician, I weight very eagerly to see all of this come to pass.