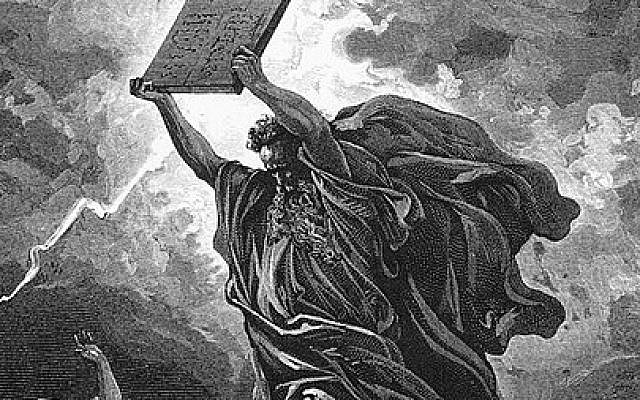 A number of years ago on a recruiting trip to England, I viewed The Crown Jewels in the Tower of London. Naively, and with an American accent to boot, I asked a guard how they were insured. Glaring at me incredulously in proper English fashion, she replied that the works were priceless and hence cannot be insured. To guarantee their safety, the unique pieces are protected by bomb-proof glass, guards, and a myriad of cameras.  One can never be too careful with one of a kind precious items.

So then, one needs to ask what motivated Moses to destroy what is arguably the most precious item in the world?  Upon coming down from the mountain carrying the Ten Commandments and seeing the Golden Calf, he smashes the tablets of stone hewn and engraved by God.  Indeed, the Talmud asks how Moses could do such a thing without a Divine command,

And he broke the tablets following the sin of the Golden Calf. What source did he interpret that led him to do so? Moses said: With regard to the Paschal lamb, which is only one of six hundred and thirteen mitzvot, the Torah stated: ‘And the Lord said unto Moses and Aaron: This is the ordinance of the Paschal offering; no alien shall eat of it’ (Exodus 12:43), referring not only to gentiles but to apostate Jews as well. Regarding the tablets, which represented the entire Torah, and Israel at that moment were apostates, as they were worshipping the calf, all the more so are they not worthy of receiving the Torah. (Shabbat 87a)

According to the simple reading of the Torah and supported by the Talmud and Midrash, Moses broke the tablets of his own volition without asking God’s permission. Nonetheless continues the Talmud, the Almighty acquiesced to this violent act:

And from where do we derive that the Holy One, Blessed be He, agreed with [Moshe’s] reasoning? As it is stated: “The first tablets which you shattered [asher shibarta]” (Exodus 34:1), and Reish Lakish said: The word asher is an allusion to the phrase: May your strength be true [yishar koḥakha] due to the fact that you shattered the tablets. (IBID)

Moses saw that the people did not deserve the Ten Commandments.  At this stage, God agreed; however, the Midrash relates a fascinating continuation to the story. After begging for forgiveness on behalf of the people, God, as the Talmud above quotes, commands Moses, himself, to cut new stones. Unlike the first tablets, which God cut from the rock, the second was to be sculpted by Moshe. “The LORD said to Moses: “Carve two tablets of stone like the first, and I will inscribe upon the tablets the words that were on the first tablets, which you shattered.” (Exodus 34:1) These tablets are intrinsically different – the first was a purely Divine product while these latter ones are a joint effort of God and Man.

While some Midrashim suggest that God made Moses recreate them because he was responsible for breaking the originals; I believe a more profound meaning can be found as well.  According to the words of Rav Saadia Gaon, quoted in the commentary of Rabbi Avraham Ibn Ezra, the second tablets were more “honored” than the first in many ways. Ibn Ezra dismisses this opinion saying that “God’s writing appeared on both and furthermore, God fashioned the first set.”  However, Rav Naftali Tzvi Yehuda Berlin (Netziv) in Ha’Emek Davar uses a Midrash to support  Rav Saadia’s contention.

According to a tradition recorded in Shemot Rabbah, Moses refrained from both food and drink for 120 days while preparing to receive the second set of commandments.  The Lord, declares the Midrash, rewarded Moses: “You have suffered [by fasting], by your life, you will not lose out [but rather be rewarded.] On the first set of tablets, only the ten commandments were written, now that you have suffered, I will give you Halachot, Agadot, and Midrashim. ” (Shemot Rabbah 47)

This Midrash continues to imply that these latter aspects of Torah were given orally; however, the Netziv sees this promise as part of the intrinsic nature of the second tablets created through the joint Human-Divine effort,

The intent of this [midrash] is that the first tablets lacked the potential for innovation.  [They only contained] what Moses received through specific analyses of verses and the law which emanated from them.  However, the capacity for [Sages to] innovate halacha through the 13 hermeneutical principles, and similar explications of the Talmud and the oral law was limited to those things directly received from Moses and those things not received which were derived through direct comparison. Regarding the second set of tablets, the power to innovate was given to each and every expert student to derive [new] law through the 13 principles and the Talmud.(HaEmek Davar, Shemot 34:1)

Netziv argues that the hybrid tablets contained within them the potential to enable future generations of scholars to create new halachot.  But why? What changed that God directed Moses to create this new capability and potentiality in the second tablets?

Here the Netziv points out the cataclysmic event which impacted everything – the sin of the Golden Calf. “All of this [change] was caused by the sin of the calf.” The Netziv continues to explain that the future dispersion of the Jewish people has its roots in this event as well. In order to survive in the Diaspora, the Jews need a Torah with the potential for creativity and renewal.:

For this reason, the Lord commanded that Moses should hew the second set of tablets. Not because the people didn’t deserve a Divine act, but rather to teach that halacha which is renewed through these tablets is a joint effort of the labor of man with Divine aid just as the tablets were created by Moses and written by God…and this is what our sages mean when they say that ‘even that which an expert student will innovate in the future is written on the tablets’, the intent is that within the potential of the second set of tablets, all is contained. All of this is the position of the Gaon [quoted by Ibn Ezra.] In this particular aspect the second set of tablets was more ‘honored’ than the first set. Even though the holiness of the first set [created by Hashem] was more sublime, and hence had they not been broken it would have been possible to derive law through logic … however, once they were broken, we need to derive law through effort and by sharpening the sword of Torah, for this purpose the second set was better equipped. (HaEmek Davar, Shemot 34:1)

Taking the Netziv’s idea a bit further, we see that the Torah given after the sin of the Golden Calf contained the capacity for adaptation and creative response to changing times and place. This changed version may just have been the ideal response to the Golden Calf. Let me explain. Idolatry, as represented by the Calf, is encapsulated in “dead” static objects. As we recite in Tehilim 135,

The idols of the nations are silver and gold,
The work of men’s hands.
They have mouths, but they speak not;
Eyes have they, but they see not;
They have ears, but they hear not;
Neither is there any breath in their mouths.
They that make them shall be like unto them;
Yea, everyone that trusts in them.

Humans are alive and changing while the works made from gold and silver do not change, grow, or move forward. Ironically, idols share this attribute with the Divine. God, too, lehavdil, does not change. The original tablets, fashioned from stone by God, represented a static and un-adaptive Torah best suited for the Divine realm. In the wake of the people’s error after the Golden Calf, a static stand-in for the worship of God, Moses recognized the possibility of a grave and dangerous error. The worship of idols and the worship of the one true God can become confused. If the Torah was nothing but unchangeable tablets of stone, then people could be led astray. In an act of great creativity, Moshe broke the tablets. Only a living Torah which represents the living relationship between God and Man can function as the covenant between the finite and the Infinite. God agreed. The second set, was a hybrid creation, a covenant between God and the Jewish people. A brit which Am Yisrael will carry until the end of time. Only such a Living Torah can bridge between the unchanging Divine and the continually changing human.

The breaking of the tablets which at first glance appears to be an act of destruction and desecration, in reality, created space for future development. In a parallel passage in the Talmud to the one quoted above, Reish Lakish says so explicitly, “Reish Lakish said, sometimes, the nullification of Torah is its foundation, as it is written, ‘The first tablets which you shattered [asher shibarta]’ God said to Moses, ‘Yasher Koach’ (well done) that you shattered them.” (Menachot 99b) Unlike the idol-like Crown Jewels, the preciousness of the Torah was found through a process of breaking and growth from a static to a living relationship.