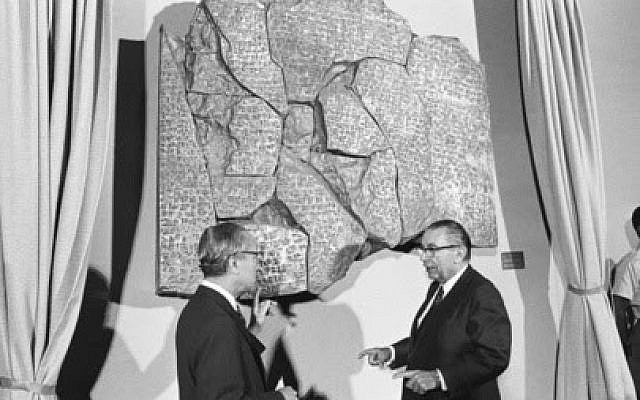 Secretary-General U Thant with Mr. Ihsan Sabri Caglayangil, Minister for Foreign Affairs of Türkiye during the presentation ceremony in 1970, UN Photo/Teddy Chen

The first diplomatic treaty in History

More than three thousand years ago, Ramses II, the Egyptian pharaoh, and the Emperor Hattusilis III concluded one of the oldest peace treaties in the history of the world. The peace treaty ended the Egyptian-Hittite war that had lasted more than 80 years. The two ancient superpowers finally ended the war with the treaty in 1276 BC.

While the treaty was not the first in the history of the world, it is the oldest known that was concluded between two independent states with equal power and status. Before that time there were around 20 treaties, in which the victorious kingdoms imposed surrender on the vanquished. However, when the factors such as the equality of the parties, the softness of the language used, and the intention being peacemaking taken into consideration, it can be said that it is the first text that can be accepted as diplomatic.

Türkiye gave a Peace Treaty Replica to United Nations for Display at Headquarters on 24 September 1970. It is considered one of the first examples in diplomatic history. The replica was presented to the Secretary-General, U Thant, by Ihsan Sabri Caglayangil, Minister for Foreign Affairs of Turkey, in a brief ceremony which took place on the second floor of the Conference building, in the delegates’ corridor outside the north entrance to the Security Council Chamber.

The Egyptian-Hittite Treaty ended the long war between the two empires. At the center of the conflict was the land that both the Egyptians and the Hittite wanted to rule. The land is currently known as Syria, and the war shows the geopolitical value of this country in that time. For more than two centuries, the empires fought for supremacy over Syria. However, the conflict culminated with the Egyptian invasion on Syria of 1274 BC.

The treaty itself contains more than 20 principles and obligations for both sides, including an emerging right to peace. However, some of the key points are the following:

The Hittite Treaty clearly recognized in the silver tablet the obligation “to settle forever among them a good peace and a good fraternity. He is a brother to me and he is at peace with me; and I am a brother to him and I am forever at peace with him … the country of Egypt and the country of Hatti will be forever in a state of peace and of fraternity as it is with us… peace and fraternity without leaving place among them to any enmity”.

The linkage between the right to life and peace, which was set out in the Charter of the United Nations some thousand years later, was already introduced in the Hittite Treaty as follows: “Look, the country of Egypt and the country of Hatti live forever in peace and fraternity”.

Another obligation was that neither side would attack the other, and this principle was in force till the end of time. Neither the Egyptians, nor the Hittite should or could occupy the land of the other nation. Apart from ending the war between the two empires, the treaty also forged an alliance between the two sides in future wars with a third enemy. The treaty also regulated whether prisoners from the one country could seek asylum in the other country.