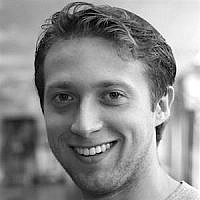 The Blogs
Aharon Schrieber
Apply for a Blog
Please note that the posts on The Blogs are contributed by third parties. The opinions, facts and any media content in them are presented solely by the authors, and neither The Times of Israel nor its partners assume any responsibility for them. Please contact us in case of abuse. In case of abuse,
Report this post.

The Orthodox Union’s swiftness to welcome a feckless and impotent statement by the president, while failing to condemn the administration’s berating of reporters and deliberate erasure of Jewish suffering from the Holocaust demonstrates a disturbing cowardice of the Orthodox Jewish community.

While the rest of American Jewry stood up and pressured the Trump administration to recognize the recent anti-Semitic acts and threats in this country, the Orthodox leadership chose silence over action and even made excuses for the Trump administration’s offensive silence. Now, failing to join its brethren in their efforts, it is all too eager to thank Trump for a dispassionate, scripted statement. Absurdly, it applauds the administration for recognizing a fact.

The Orthodox community fundamentally misunderstands the political climate regarding anti-Israel demonstrations and anti-Semitic threats. While the two are often intertwined, they should not be treated as one and the same. By redefining and senselessly equating meaningless rhetorical labels like “pro-Israel” with “great friend of the Jewish people,” Orthodox Jews have convinced themselves that the true threat to the community are teenagers demonstrating against the Israeli government. Armed with the backdoor escape policy of making aliyah, Orthodox Jews primarily harness their political power for issues related to Israel. But they have failed to recognize that their alliance with “pro-Israel” groups is tenuous and does not equate to an alliance with “pro-Jewish” groups. It never occurs to them that support for Israel can come from a convenient mutual interest in the fight against Islamic extremism or because Israel is seen as the model for a new vision of America as a nationalistic and militaristic force. This is why the community can miraculously justify supporting a man who has, at best unwittingly, wondered into anti-Semitic tropes and has stocked his administration with those who have enabled anti-Semitism.

The community’s fundamental misunderstanding leads directly to why it struggles to make sense of Linda Sarsour, a Palestinian-American woman and supporter of BDS who also raised tens of thousands of dollars to help repair the vandalized St. Louis cemetery. By linking “pro-Israel” with “great friend of the Jewish people,” the Orthodox world can not even conceive of a person who simultaneously opposes actions of the Israeli government yet also feels a strong solidarity with the Jewish community. Alternatively, it fails to comprehend that support of Israel does not necessarily relate to caring about the Jewish people.

Even in the face of being told to sit down and be quiet, the Orthodox world shamelessly defends the president. Masquerading as a journalist, Ami reporter Jake Turx introduced his sensible question on recent bomb threats against Jewish Community Centers with “I haven’t seen anybody in my community accuse yourself or anyone on your staff of being anti-Semitic. We understand that you have Jewish grandchildren – you are their zayde…” It was a cowardly move directly designed to curry favor with the president, an attempt to claim him as an ancillary member of the Jewish community, rather than to actually challenge him on his administration’s deafening silence. It didn’t work. In his unscripted style, Trump berated Turx, didn’t answer the question, and told him to sit down and be quiet. Yet in a bizarre turn of events, both Turx and Ami Magazine defended the president later on national television. Surprisingly, the Obama administration was never afforded such leniency, as the cover photo of a January 2012 edition of the magazine showed the White House draped in Nazi colors with SS troops marching outside. It would be near impossible not to notice the implications of such an image.

Just travel to any of the happy and comfortable villages dotting the New Jersey and Long Island suburbs to hear the calls of “pro-Israel” droning robotically as a rallying cry in support of the Trump administration. If this were completely accurate, it might be excusable. But there is hardly any time between bites of kugel to reflect on why a man who directly tells Netanyahu to halt expansive settlement construction and openly questions Israel’s commitment to peace should be enshrined as “pro-Israel,” let alone a “great friend of the Jewish people.” The Orthodox Union’s failure to comment on these statements and join with other Jewish groups in pressuring the Trump administration to take a hard stand against anti-Semitism only exacerbates the problem.

The Orthodox community is undoubtedly more concerned with the preservation and promotion of its own business and political interests than in being a strong and powerful force for promoting Jewish causes in this country. While it marshals its forces to achieve the great symbolic act of moving an embassy 44 miles east of where it currently sits, the remainder of American Jews are fighting to stem the growing tides of anti-semitism within this country. We are our brother’s keeper. It is time to start acting like it.

About the Author
Second year law student at NYU School of Law.
Comments