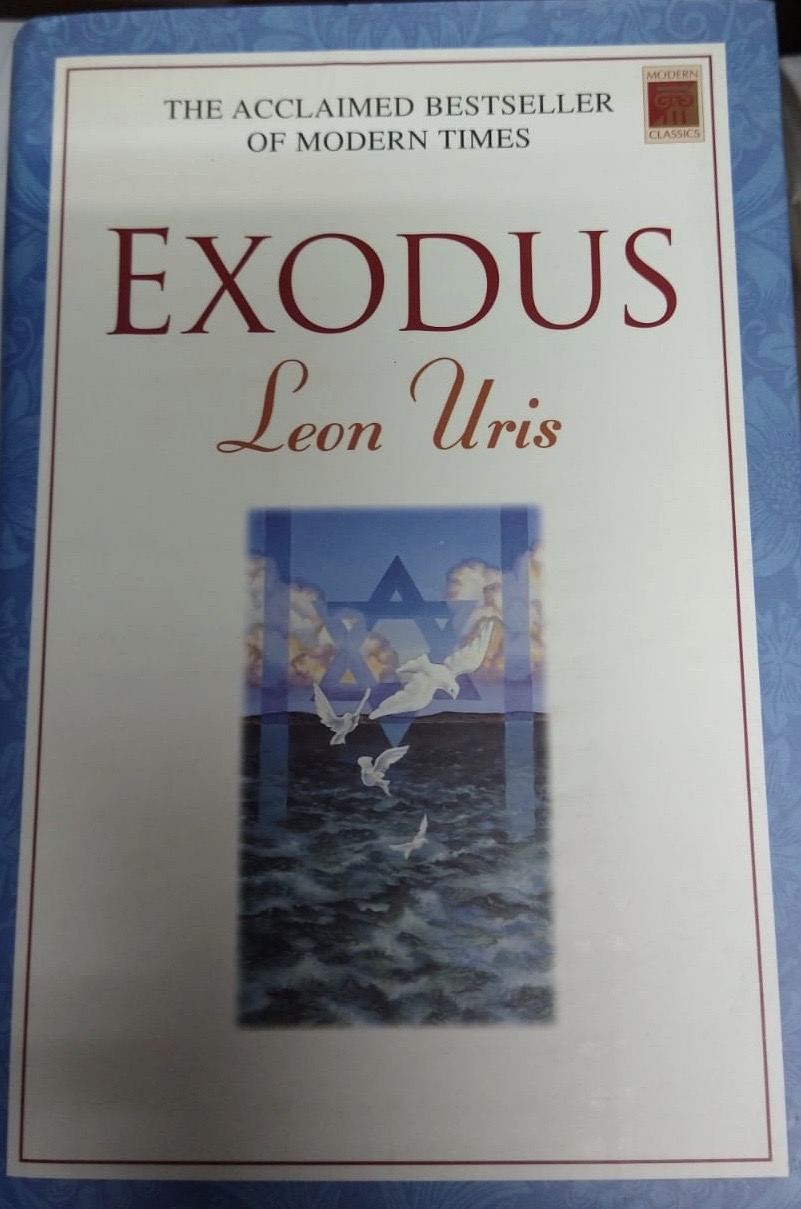 A signed copy of Exodus as provided to the author by Leon Uris “in person.”

It’s a little bit of hubris of me to write a book review for an acclaimed, award winning book first published nearly a decade before I was born, but the modern book Exodus is something that’s no less timeless than the original, and no less significant, filled with historical and Biblical analogies of the Jewish people leaving exile and coming home. It’s a page turner that if you didn’t read, you’ll want to.  God is not the author of “Exodus,” but He inspired a great man, Leon Uris to be entrusted to tell this story.

I thought about “Exodus” this summer as I and so many other Israeli immigrants have been celebrating the anniversaries of our arrival.  Today, immigrating to Israel is a systematic process, usually planned, and with the ability and presence of mind to understand the significant milestones and fulfilment of prophesy that we are in the midst of.  Summer months tend to work for families because kids are on vacation, and it’s a good time to pack and sell one’s house.

This is an incredible juxtaposition to the exodus of the Jewish people as depicted in “Exodus” in the 1940s.  Uris depicts this brilliantly, interweaving the arrival of new immigrants fleeing the ashes of Europe, coming against the British blockade that prevented Jews from arriving after long voyages by sea, being detained and sent to internment camps, and the interplay between the established Jewish community leadership, Arabs in the Land, British soldiers and American volunteers.  It’s a powerful novel framed in actual historical accounts.

If you’ve never read it, you don’t want to wait. One person underscored this, “Much to my chagrin I never read Leon Uris until now!  Why? I have no excuses to serve up. He is one of very few brilliant maestros in literature.”

Someone else described “Exodus” as an “international publishing phenomenon–the towering novel of the twentieth century’s most dramatic geopolitical event,” crediting Uris for “magnificently portraying the birth of a new nation in the midst of enemies–the beginning of an earthshaking struggle for power.”

Others said, “Exodus” is “Among the top five books I have ever read, and one of the most important.” And, “A poignant and beautifully-told story that shares a painful struggle in Jewish history.” “Exodus” was powerful then, and relevant still today.

In addition to portraying the exodus of the Jewish people from post-war Europe and depicting the founding of the State, “Exodus” is also at least partially credited with inspiring another exodus.  As Jews in the USSR looked to Israel with a sign of hope and cause for reborn national pride, Uris’ depiction of the story is known to have made its way among Zionist activists who could have been arrested just for owning a copy.  It ignited many Soviet Jews’ sense of nationalism and Jewish identity that was a catalyst for many aspiring to come to Israel themselves, and ultimately doing so. 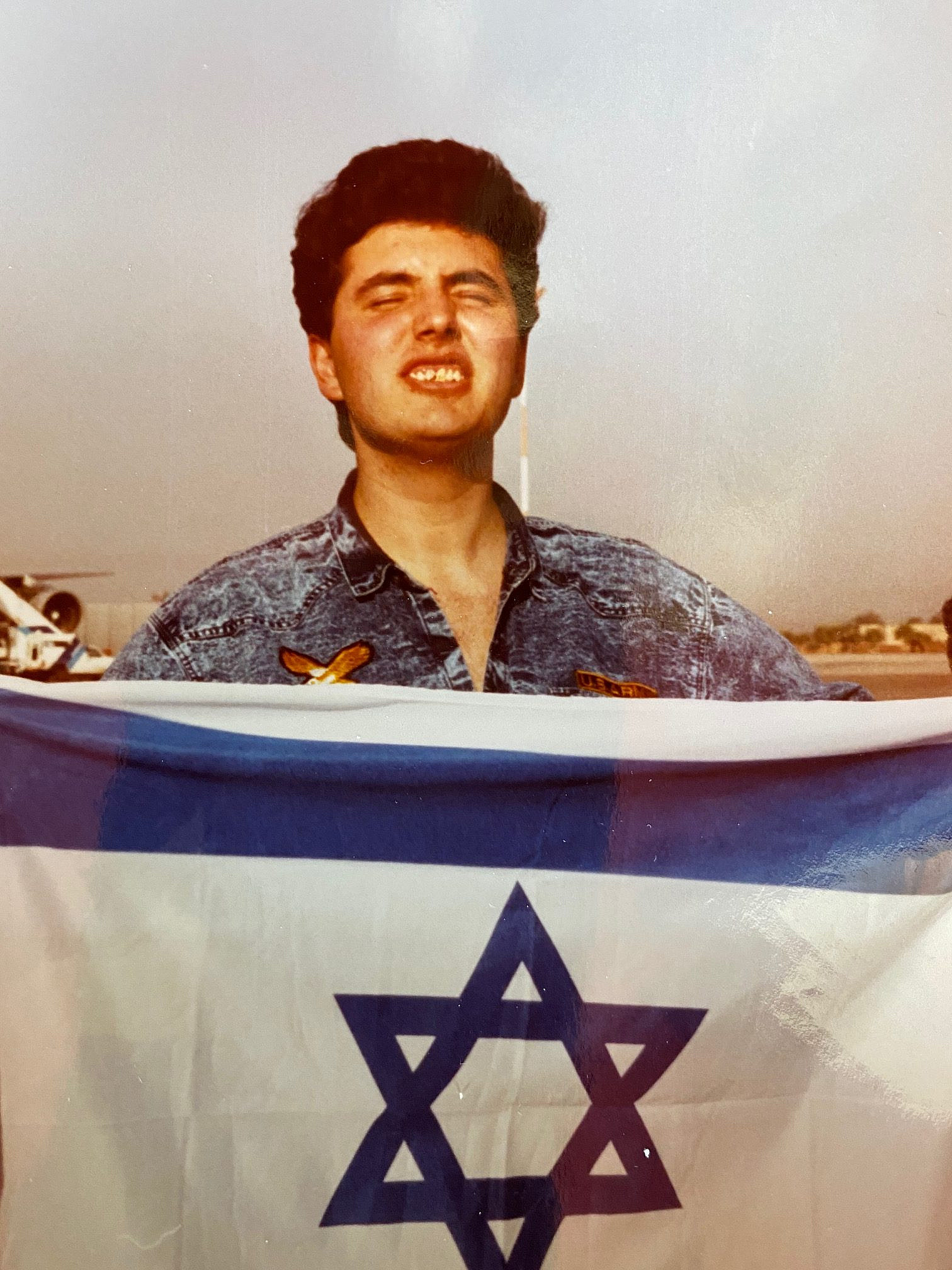 A young Soviet Jew upon arrival in Israel, full of pride and joy at being home.

Nearly twenty years ago, I had the privilege of meeting Leon Uris in person.  Or at least that’s what he told me to say.  The 1960 movie “Exodus” was rereleased in a digital format and I was able to host a special screening of it as a fund-raising event.  I was tracked down Uris’ phone number and called him out of the blue.  After introducing myself, I asked if he’d be willing to sign a bunch of books that I’d bring him, one for each of the major donors to this event.

I was worried that he’d feel I intruded on him, or might not want to be bothered by this.  Mr. Uris responded immediately and graciously.  Not only did he say he’d sign all the books, but he offered that I should give him a list of the donors’ names and he’d inscribe the books to each of them.  Wow, how thoughtful.  It was obvious that he had done this before.  Today, Bob and Lois, Barry and Linda, Steve and Janine, John and Ilse, and many others have their inscribed copies proudly in their homes.

I started to ask Mr. Uris about a good time to bring him the books.  He lived about 3-4 hours from me, so I planned to take a whole day to drive them to him.  “Nonsense,” he said.  “Just put them in a box with another box inside, addressed back to you, and I’ll sign them and mail them back to you.”  He was worried that I’d waste a whole day driving to him, as if it would be a two-week journey on a rickety boat packed with refugees.

“I’m happy to bring them to you.  That way I can tell people I met you,” I said.

“So just send them to me and tell people you met me,” he retorted.  And so, I did.

I also had him sign some “spare” copies which I came across recently.  “How many signed copies of Exodus does one person need,” I thought.  And then I realized its an opportunity to come full circle of sorts.  I decided to donate one autographed copy as a fund raiser, the way I got in touch with Mr. Uris to begin with, to support the ability of new immigrants to come to Israel, be absorbed, and become acclimated today.  Thousands arrive each year from the US and throughout Europe, Russia and Ukraine, and India and Ethiopia just to name a few of the four corners of the world. Immigrating takes less time and is more organized, and there are no British soldiers blocking Jews from coming home. But it’s still a transition that many try to make as seamless as possible, and absorbing immigrants from throughout the diaspora is no less significant today.

While you can get a copy online anywhere, through the Genesis 123 Foundation, which supports an array of needs in Israel to help support Israelis of all backgrounds, you have an opportunity to own your own signed copy by making just a $10 donation.  For details and to enter the drawing, please click here.  It’s not the same as owning your own signed copy of the Book of Exodus, but its still pretty cool.

Leon Uris depicted those early years and the yearning and challenges better than anyone else could.  There are many more things I could say about “Exodus” but highly recommend you read it for yourself.  It will be a book you cherish and save.  Spoiler alert, we win, survive, and thrive.