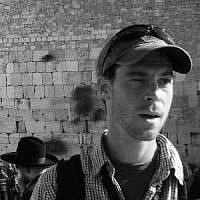 The Blogs
Alon Lyons
Apply for a Blog
Advertisement
Please note that the posts on The Blogs are contributed by third parties. The opinions, facts and any media content in them are presented solely by the authors, and neither The Times of Israel nor its partners assume any responsibility for them. Please contact us in case of abuse. In case of abuse,
Report this post.

An hour ago the IDF spokesperson tweets “In the past 24 hours, Hamas fired rockets at Tel Aviv, Jerusalem & other major cities. M302 [rockets] can strike most of Israel.”

In a Times of Israel analysis piece dated July 8, 2014 Avi Issacharoff, reporting on the ongoing conflict between the Israeli Defense Forces and Hamas in Gaza, stated quite succinctly that

“Israel, for its part, is progressing slowly and carefully, as if Hamas is shooting at residents from another country – the country south of the Dan region. There is a sense that the IDF will not expand its combat activities and will not send in ground forces as long as the attacks are restricted to the communities around the Gaza Strip, maybe as far as Ashdod or Beersheba.”

As one resident of this ‘other country’ I could not agree more.  As hundreds of rockets strike Israeli soil it seems we are once again at war.   Avi Issacharoff has concisely touched upon a sad reality.  Unless the population centres in central Israel are hit, it seems that the government is prepared for this sacrifice.  Public announcements for us to remain calm, clear our bomb shelters and stay inside and away from large social gatherings are very pretty on pages and in news broadcasts but in reality what they are saying is “dig in for a long one folks because unless the precious centre is hit, you are on your own.” Well, wonderful.  We’ve heard this before and are more than capable of taking care of ourselves but find ourselves, again, shocked with how little our lives are counted when compared to the centre.  Yesterday several politicians including future president Rivlin made their way to our southern communities in what seemed more like political maneuvering than true solidarity.  Arutz channels last night played and replayed scenes from Tel Aviv, Hadera and Jerusalem throughout the night as they interviewed and analyzed the previously underestimated rocket capabilities of Hamas to reach further into the country’s heartland. And then when yet another siren shook Beer Sheva at 01.00 in the morning, there, located in small white writing at the bottom of the television screen I read “rockets in beer sheva”.  Back to the real news, eh?

I am not so out of touch to believe that our leaders do not have our interests in their hearts, minds and their security meetings, but in history when territories of a country’s sovereign soil are under attack, this constitutes an aggressive act of war which no other nation would stand for. Yes, today marks the second day of Operation Protective edge and with 40,000 reserve troops called up the situation is getting sticky but it was not the sirens in the south that caused the shift in operational planning, it was the sirens in the centre.

The Negev region of Israel accounts for approximately 66% of the country of Israel proper (not including the areas of the west bank).  There are approximately 630,000 residents living in this region, including the local Bedouin and Arab populations who account for approximately 25% of the population and who are equally and quite literally under fire.  In mathematical terms these populations account for 8% of the total population of Israel.  In political jargon we are simply “the periphery”.  When Mr. David Ben Gurion was helping to re-establish this modern state he recognized the massive, albeit difficult, potential of settling in the Negev desert.  He studied this arid region thoroughly, joined its communities, analyzed its soils and its water sources and located its future as the lifeblood of the Israeli state.  If we were willing to work hard enough to till the soil and develop unique agricultural technologies and techniques we could fulfill our hopes of an Israeli state that could have all the land it needed without stepping over the boundaries defined by the United Nations in 1947.  This is still possible and a testament to this reality is the massive influx of billions of dollars the government as well as the Jewish National Fund and other NGO’s have put into the study and development of the Negev in the last 10 years.  However, if its citizens continue to feel as though they are worth less than others, and if their lives and livelihoods are threatened, not by rockets, but instead by neglect, this author can humbly project that no matter how much money is pumped into the socio-economic systems here and no matter how the peace process continues to unfold, the future is bleak indeed.

By the way, have the murderers of Gil-Ad Shayer, Naftali Frenkel and Eyal Yifrah been located?

About the Author
Alon Lyons is a licensed tour guide in Israel. He focuses on the politics of the modern state of Israel as well as biblical archaeology and history. He has completed his masters degree from Tel Aviv University in Middle Eastern History and Political Science.
Related Topics
Related Posts
Comments