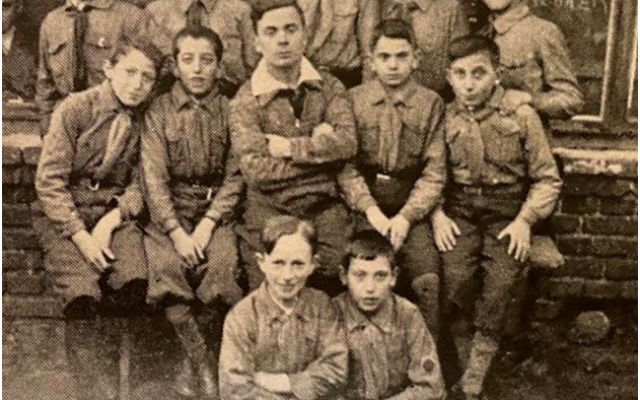 Jews lived in Tomaszów from the very beginning of the town’s existence. This fact is unrecognizable today in Tomaszow. In 1595, the first wooden synagogue was built.

In the mid-17th century, a dynamically growing Jewish community was destroyed; at first during the invasion of the Cossacks – Tatars army, under the command of Chmielnicki, and later on by the Swedish army. Many inhabitants were killed, and the Jewish districts with the synagogue complex were demolished. In the 18th century, the Jewish community in Tomaszów restored itself.

During the 18th century, the town became known on account of the rabbis living and teaching there. In the 19th century, Tomaszów turned into a powerful center of Chasidism. For a short period of time the famous Kotzk Tzadik resided there – Rav Menachem Mendel Morgenstern, known as “Mendełe of Tomaszów”. He was later known as the Kotzker Rebbe; he never published any works. He wrote many manuscripts, but he had them all burned before his death. Several collections of his sayings have been published, most notably the Emes VeEmunah. The Kotzker Rebbe’s disciple Rabbi Avrohom Bornsztain, author of Avnei Nezer and first Sochatchover Rebbe, was his son-in-law.  The Kotzker Rebbe is considered to be the spiritual founder upon whom the Ger dynasty in Poland is based. Ger Chassidim follow the teachings of its founder and first Rebbe Rabbi Yitzchak Meir Alter. He is commonly referred to by the name of his Sefer as, The Chidushei Harim. He was both a preeminent disciple of the Kotzker Rebbe and his brother in law, through his second wife.

A list of some famous sayings by the Kotzker Rebbe (Menachem Mendel Morgensztern of Kotzk, 1787–1859):

The Tzadik Yosef Gryn of Jarczow, student of the Choze “Seer” of Lublin, also lived in Tomaszów; however, he was forced to move to Kotzk. The Rabbinical Najhaus family established their own dynasty in Tomaszów. Many shuls operated in the town in that period, belonging to particular Hasidic groups, originating from Kotzk, Turzysk, Radzyń, as well as from Galicia – from Bełz and Nowy Sącz.

In 1868, Pinchas Singer was born in Tomaszów Lubelski, the son of a local rabbi. Pinchas had a son in 1903 named Icek Hersz Zynger. Rabbi Pichas become the Rosh Yeshiva of Radzymin in 1907. His son Icek learned in the Tachkemoni Rabinical Seminary, for a brief time. This son was later known as Isaac Bashevis Singer, the Noble Prize winner for Literature (1978). He took on his mother’s name, Basheva, as a pseudonym and then later on as his middle name.

The Zionist movement was prominent in Tomaszów. In 1918, a branch of the Zionist-religious organization Mizrachi was founded there. The Zionist Al Ha-Mishmar, belonging to the General Zionist Organization competing with the Orthodox Aguda, was also active in Tomaszów. My Grandma Szyfra was a member of the HaShomer HaTzair from the age of 10 until 17 years old. She liked their songs and dances; however she rejected their Socialist ideology. For awhile she entertained the thought of making Aliyah to Israel and moving to a Kibbutz. She continued to sing their songs even after the war.

Just before World War II, the Jewish population of Tomaszów amounted to approximately 10,000 members which constituted a third of the town’s inhabitants. The following buildings were the biggest in the whole county: the brick synagogue built in the first quarter of the 17th century, which replaced the previous one, destroyed in 1648; a single-storied synagogue, dating from the end of the 16th century, and a bath house remodeled a few years before the outbreak of World War II, as well as a cemetery, one of the oldest in the town, established in 1623 and located in Starozamojska Street (former Krucza Street). There was also a ritual slaughterhouse in Tomaszów.

The Great Synagogue was build during the rabbinate office of Eliasz Jakub Wieliczkier. The brick synagogue building was erected on a rectangular plan. The synagogue was decorated by the Warzager brothers, painters, artists brought to Tomaszów for this purpose.

During World War II, on October 16, 1939, the local Volksdeutsche (Germans) set fire to the synagogue and prevented the firefighters from extinguishing the fire. The Nazis charged the Jewish community with a significant contribution for alleged fire-fighting negligence and for imaginary fire-fighting costs. Even before the synagogue was burned down, the Jews took out the Torah scrolls and buried them. After the war, a Torah scroll was recovered. In 1940, the remains of the Tomaszów synagogue were pulled down. Currently, there is a car parking lot on the site of the former synagogue.

In the interwar period, apart from the Great Synagogue, there were two synagogues in Tomaszów Mazowiecki: one at ul. Jerozolimska 17 (next to the former Bożnicza Street), the second one at ul. President S. Wojciechowski (currently ul. Warszawska) 50. Both synagogues were burned down on November 14, 1939.

Before Polish Independence Day (November 11) in 1939, the German police carried out mass arrests. Further arrests were carried out in January, June, and August 1940. The victims were then interrogated by the Gestapo, and most were afterwards deported to the Sachsenhausen, Ravensbrück and Buchenwald concentration camps, while some were murdered on the spot. A ghetto for the imprisonment of 16,500 Polish Jews was created in December 1940 and closed off from the outside in December 1941. Hunger was rampant, followed by a typhus epidemic.

At the beginning of 1942 the ghetto was closed down, and in March of the same year, 500 local Jews were sent to the labor camp in nearby Cieszanów. On 22 May 1942, they were deported to the Bełżec concentration camp. The Tomaszów’s ghetto was liquidated at the end of October 1942, when the Nazis transported part of the ghetto inhabitants to Bełżec by trucks, and shot the remaining part at the Jewish cemetery.

In December 1942, 15,000 Jews were deported aboard cattle-car trains to the Treblinka extermination camp, which probably included Esther Sarah Jurkiewitz (my great grand-mother) and her maid Yenta. Some two-hundred Jews from Tomaszów are known to have survived World War II; my Grandma Szyfra and Uncle Izek are from this very small group of survivors.