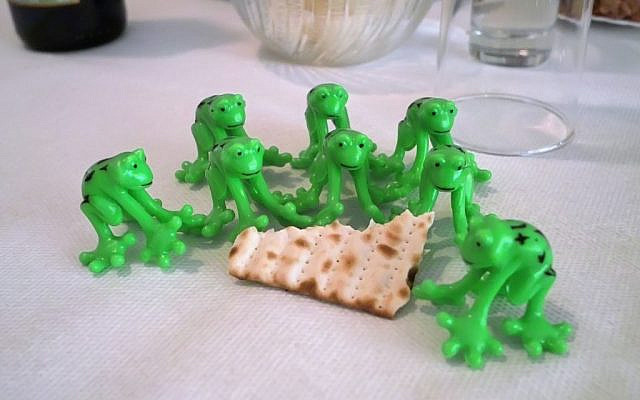 “Hey boychick, take a guess on what’s my topic for this year’s Passover speech?”

“Mort, I really don’t feel like guessing but I’m hoping and praying that it’s not about COVID. Nobody wants to  hear another word about the eleventh plague.”

“Boychick, your prayer has been granted. It ain’t about COVID.”

“Well, if it isn’t COVID, what about Palestinian terrorists killing Jews on Israeli streets?

“Nope, this year’s  speech is not about the twin plagues of anti-Semitism or anti-Zionism.”

“Well, what about January 6th, the failed insurrection? The day America almost went from being a democracy to a dictatorship. The day America’s freedom candle was almost snuffed out.”

“Nope, it’s not January 6th but I almost selected that subject for my Seder speech.”

“Then it’s got to be Ukraine.”

“Boychick, you guessed it.”

I smiled and added, “Well, in that case Mort, I know what the wicked son is going to rant about this year.

I can hear his disjointed thoughts flowing out of his mouth as if they were an angry torrent.

Why don’t we stay out of the f’ing war?

He’s let the Israelis bomb the Iranians in Syria.

Let the Russians and the Ukrainian fight it out.

Didn’t anti-Semitic Ukrainians bastards participate with the Nazis in the mass murder of Ukraine’s Jews in Bari Yar?

This war will end faster if we don’t send weapons, supplies and food to the Ukrainians.

Our sanctions on Russia will only lead to higher costs on us.

We got enough problems at home. We need to spend our tax dollars on our problems; this ain’t our problem; we need to stay out of it.

Then some of those guests sitting around your Seder table will yell at the Wicked Son:

But if we don’t act now, Putin will never stop usurping other Eastern European nations or even a NATO country.

And then we, Americans, will taste the twin plagues of nuclear radiation and nuclear winter. Putin has already threatened to use nuclear bombs.

Remember before WWII, England and France allowed Hitler to nibble away on smaller nations, until the Nazis were a power house.

Putin is just another power hungry dictator. A human life means nothing to him.

This Passover, Putin is our Pharaoh and he must be stopped now.”

I paused, wanting to hear Mort’s comments on what I had just said.

“Boychick, you nailed it.

I saw our Seder table exploding with passionate words. I saw raised fists and that is a good thing.

For it’s our responsibility to tell the Passover story and to learn from it. We are commanded taste the bitter herbs—the Maror and Chazeret— and to remember the tears of slavery. For if we don’t, history ends up biting us in the ass.

“Mort, since I’m on a roll. I got some other an ideas.

Why don’t we dye the roasted eggs —the Beitzah— on the Seder plate yellow and blue. So those eggs to represent the colors of the Ukrainian flag.”

“Great idea. Let’s do it and while we’re in Publix, why don’t we go all the way and buy some yellow and blue napkins and paper plates.”

“How about buying a bouquet of yellow daffodils and blue iris’?

And as a final touch, let’s tape pictures of President Zelensky on to the covers of our Haggadahs. He’s a modern day Moses.”

“Before we head to the store, I think we should write four additional questions for the kids to ask and answer about Russo-Ukrainian war.

Here are my ideas for the four Q&As.

Q. What should we do?

This year, we must act as if we are Ukrainians:

Living in the bombed-out basements:

Without toilets or running water or food or medicines or electricity or heat;

Filled with children and fear and choking black smoke and the smell of death;

Hungry children screaming and crying as they hear bombs exploding above their heads;

Frightened families seeing each other’s faces by the light of Shabbat candles;

And when will this hell on earth end?

And praying for the end of the plagues of darkness, hunger, serious wounds, fear of death, tyranny and war.

We Jews have tasted these plagues for over two thousand years.

So this Passover, we should be able to relate to the Ukrainians;

Q. Why must we help Ukraine?

A. Because for no good reason the Russian empire invaded Ukraine and if Mr. Putin gets away with this criminal act who knows where he will stop.

Q. How can we help the Ukraine people?

A. Make our voices heard. Post your support on social media. Let the President and Congress know where you stand on Ukraine. Donate to Ukraine charities and Israeli charities that are helping Ukrainian refugees. Boycott Russian goods like vodka and caviar. Pray for peace.

Q. When must we help Ukraine?

A. Now! Time is of the essence because as we speak, millions of refugees are living in makeshift tents and  praying for the day when they will be able to return to their homeland. And innocent children and women and old folks are hiding in cellars, praying for their lives as we sit around this Seder table.”

“Boychick,  I loved your four questions and I think we should conclude the Seder—the Nirtzah-–with a prayer.

Almighty, let the Ukrainian and the Russian people live free and in peace.

Almighty, let the Russian people over throw their dictator.

Almighty, let the Russian army mutiny against its generals.

Almighty, please, we beseech you to end this bloody war by slaying the Angel of Death.”