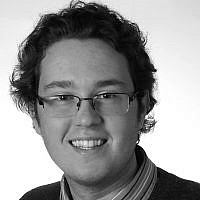 The Blogs
Kevin Rudolph
Apply for a Blog
Advertisement
Please note that the posts on The Blogs are contributed by third parties. The opinions, facts and any media content in them are presented solely by the authors, and neither The Times of Israel nor its partners assume any responsibility for them. Please contact us in case of abuse. In case of abuse,
Report this post.

JERUSALEM – On March 17th Israel will elect the members of its 20th Knesset. The upcoming election, a product of Prime Minister Benjamin Netanyahu removing two of his coalition partners (Yesh Atid (There is a future) and Hatnua (The Movement)), will include, at the moment, a completely new party – Kulanu (all of us) – and an alliance of Hatnua and Avodah (Labor).

Two questions on the minds of voters, politicians, and pollsters surround the effects of the approved alliance between Hatnua and Avodah, and the potential spoiler effect of Kulanu.

In terms of the merger between Hatnua and Avodah, it is necessary to travel back in electoral history to 1996, where we see Benjamin Netanyahu win his first term as Prime Minister (in the short-lived system of separate voting for the Prime Minister) under the Likud (Consolidation)-Gesher (Bridge)-Tzomet (Crossroads) alliance. With Gesher’s departure from the alliance two years into the Fourteenth Knesset, and problems concerning Palestinian negotiations, Netanyahu was forced to call for a new election.

This election in 1999 brought a new alliance named One Israel, which was composed of Avodah, Meimad (acronym for Jewish State, Democratic State), and the formerly Likud-aligned Gesher. This alliance, under Ehud Barak, won the election and made Barak Prime Minister.

In forming connections between the 1999 election and the 2015 election, we see that both were called by Netanyahu because of problems in his coalition, the one causing the 2015 election being his dismissal of the Yesh Atid and Hatnua leaders’ from their ministerial positions. We see now, like we saw in 1999, a coalition that includes Avodah and a former Likud-aligned party; this time that party is Hatnua (who were coalition partners, not alliance partners) instead of Gesher. The connection between Gesher and Hatnua goes far beyond their political positions to their characteristics of conception. Both parties were formed and led by former Likudniks, David Levy for Gesher and Tzipi Livni for Hatnua.

If history repeats itself, as it tends to do, it would not be far off to see Prime Ministers Tzipi Livni and Isaac Herzog take their seats in the 20th Session of the Knesset.

We are still left with Kulanu, which we have not yet addressed. The question to ask in a multi-party system is how many parties are enough? Clearly more parties would seem better for the voters because there is a greater chance that the voter’s beliefs are closer in line with a particular party, however this makes the formation of coalitions the more difficult. With more factions comes opinions, causing more demands, and making more mouths to feed. These faction leaders often put their personal ambitions ahead of party platforms and contribute to parties splitting and failures to form coalitions with similarly leaning parties.

Kulanu, founded by former Minister Moshe Kahlon, has positioned its focus to concern the economy. Being that both Yesh Atid and Likud will run heavily on the economy, and seeing that the current leaders of both parties have led the Finance Ministry at some point in time, all three parties will be in direct competition for control of the issue.

In terms of major political players we have discussed all except for HaBayit HaYehudi’s (The Jewish Home) leader Naftali Bennett. With all this political maneuvering and scrambling happening in the left and right camps, his nationalist far-right party has an opportunity to take a more conservative base away from Likud, and in doing so could put themselves in a potential position of power. Especially given that Yisrael Beituneu (Israel, Our Home) has agreed to vote-share with HaBayit HaYehudi and not their former joint-list partner Likud, Bennett could very well surprise the country in what would be a weak, but possible coalition.

Since at least 1981, either Shas or United Torah Judaism (or its previous forms) have served in the ruling coalition, the exception being in 2003. In both left and right governments, the religious parties have courted and been courted to join the ruling coalition. The reason for this is because they have a singular focus – exemption of government mandates and the continuation of funding for their people. When the prize for coalition partners is control of everything outside of this domain, both the left and right want to play ball. Although there is talk that Eli Yashai, the former leader of Shas, has formed a new party, its possibility of shaking up the political scene is doubtful given that it is trying to draw from Shas’s base. The only thing that will happen if Yashai’s party gets off the ground is that there will be one more mouth to feed in the coalition agreements.

About the Author
Kevin Rudolph is a graduate student in public policy at the University of Chicago, Chicago, IL.
Related Topics
Related Posts
Comments