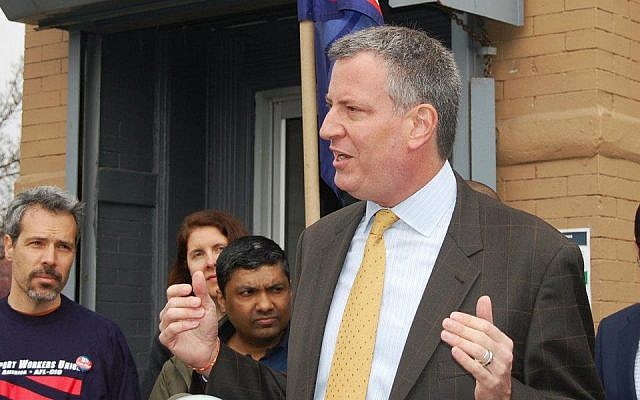 New York mayor Bill de Blasio and other disingenuous politicians use anti-Semitism as a political cudgel rather than fighting it with concrete plans. (Courtesy BilldeBlasio.com)

In an act of deflection demonstrating a stunning dearth of honesty, awareness, and genuine concern for the residents of his city, Mayor DeBlasio declared anti-Semitism to be a product solely of right-wing extremists.  He cannot be oblivious to the source of the attacks in Brooklyn.  Much of what is occurring there reflects decades of interracial tension that flares and subsides.  Its current iteration is a product of a swelling national and international zeitgeist rendering overt hatred of the Jewish people acceptable yet again in the eyes of a broad spectrum of people.

As Jews march in New York City today in solidarity, we need to do so as a united, apolitical front.  DeBlasio’s misguided statement embodies the chief difficulty Jews will face in combatting history’s most recent threat to our existence:  the politicization of anti-Semitism.  His dishonestly partisan statement related to the upsurge of violence against the Jewish residents of the city for which he serves as executive is not indicative of his ignorance of what is happening right under his nose.  Reality does not serve the left’s narrative that the President and Republicans are responsible for every ill befalling this country.

The constant refrain that Trump made these crimes possible by setting the tone of hatred, xenophobia, and racism comforts people.  While simplistic and puerile, the idea that replacing one figure will erase these evils and somehow reseal Pandora’s Box allows people to sleep better at night and motivates them to campaign for whomever is shouting their hatred of Trump the loudest.

Would that ending anti-Semitism were that simple.

Anti-Semitism is not called the world’s oldest form of hate for nothing.  Jews have been a lightning rod for a world in turmoil for the entirety of written history.  Those who myopically wish to point a finger at the President and blame one individual, one administration, one party for a hate as old as dirt will make no progress in combatting this latest outbreak of a pernicious movement.

The human mind’s predilection for simple answers and deflecting blame blinds us to the complexity of what we see occurring today.  Complexity frightens us.  It makes resolving the world’s woes less attainable.  How can we begin to combat anti-Semitism when its sources are as multifaceted as a Rubik’s cube?  We shy from the impossible and instead point fingers and blame the “other” for something so enmeshed in human history that it is unfathomable.

Thus has anti-Semitism in its present form become a sword in the hands of partisan politicians who wield it with self-righteousness.  They use it to take shots at one another to score political points.  DeBlasio ignores the actual demographics of a crisis in his own backyard.  Al Sharpton masquerades as a great conciliator in the neighborhood whose interracial woes he has spent a lifetime stoking.  Jews are marginalized and ostracized on university campuses the world over by purported liberal activists not because of anything Israel has done, but because of their DNA.  The right capitalizes on the overt anti-Semitism of the likes of Ilhan Omar and Rashida Tlaib to garner cheap points while concomitantly calling skinheads “fine people” when they march in Charlottesville and chant “The Jews will not replace us.”  The people wielding machetes, firearms, and explosives from Monsey to Pittsburgh to Jersey City come from a diversity of backgrounds and political ideologies.  There is no single common thread.  There is no sole enemy to combat.

It is a confusing time to be an American Jew.  One does not know where to look for genuine friends or who to eschew as a true enemy.  Jews do not have a place in any political party as constituted at the moment.  Any Jew who thinks he or she is beloved by the left or the right has not been paying close enough attention.

Instead of using us as a sword, we need our leaders to provide us a shield from a world lashing out in anger and frustration against us yet again.  Protecting Jews from violence, however, is not the goal of a political game in which we have become yet one more dispensable piece. We are nothing but pawns in a political chess match.  We will be the first pieces sacrificed by both parties when the need arises.