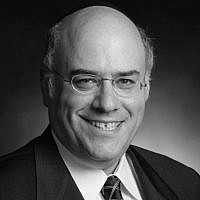 The Blogs
Jacob J. Schacter
Apply for a Blog
Advertisement
Please note that the posts on The Blogs are contributed by third parties. The opinions, facts and any media content in them are presented solely by the authors, and neither The Times of Israel nor its partners assume any responsibility for them. Please contact us in case of abuse. In case of abuse,
Report this post.

In the second half of Sefer Shemot, the book of Exodus, all aspects of the Mishkan, or Tabernacle, are described in great detail — not once, but twice. The text focuses on the structure of the Mishkan, its vessels, and the garments worn by the priests who ministered within it. The Torah goes to great length describing the curtains, beams and pillars, and the ark, the altars, the menorah, and more.  But there is one very small segment of the Tabernacle’s structure – one that is often ignored and overlooked – that is highlighted by an interesting midrashic passage on a verse at the beginning of Parshat Pekudei.

The Midrash (Yalkut Shim‘oni, Pekudei #415) relates that after the work of the Mishkan was completed, Moshe invited the Jewish people to make an accounting. “Thousands of shekels were collected and thousands of shekels were spent,” he said. “Let us make sure that all the money was allocated appropriately and that both sides of the ledger match with one another.”

All of the Jews gathered around, continues the Midrash, and Moshe commenced the audit. Lo and behold, when he was finished, he was 1,775 shekels short. The money was raised, but he could not account for how it had been spent. He began to panic, as he was afraid that his honesty would be suspect and that his integrity would be impugned. He even expressed fear that the Jews would accuse him of embezzling the funds.

Once again, he feverishly scanned the entire structure of the Mishkan, searching for something he might have missed. Finally, God “enlightened” him and drew his attention to the tiny little hooks that held the Mishkan’s pillars together, the “vavin la-amudim.” Here he found the objects for which he had spent that money (Exodus 38:28). At that moment, concludes the Midrash, the Jewish people were appeased and a potential crisis was averted.

Why is the Midrash drawing our attention to these tiny hooks? It would appear that these tiny elements are highlighted in order to remind us that sometimes it is the small details, perhaps those that are easily overlooked, that hold a large enterprise together.

In Hebrew, the letter “vav” means “and,” it is a connector that links two objects together. In this context, discussion of the “vavin” is a reminder that a strong nation can never dwell on the individuals that comprise it, rather it must always be about us “and” the other – us and our families, us and our communities, us and the Jewish people, and us and the One Above.

The Rama in Yoreh De‘ah (273:6) notes that it is preferred that a Torah be written so that every column (amud) begins with the letter vav, and he refers to this by a name with which we are now familiar, “vavin la-amudim.” The lesson: every new column of our lives, every pillar of our existence, needs to be animated by the lesson of the letter vav.

Furthermore, the Torah tells us that after Cain killed Abel, “God appointed a sign for Cain” (Bereshit 4:15), colloquially referred to as “the mark of Cain.”  What exactly was the mark of Cain?  The Midrash informs us that it was not simply a random mark but it was, literally, a letter – the Hebrew letter “vav.”  The late Rabbi Meir Shapiro, the Lubliner Rav, explained that Cain, an individual who was only concerned about himself and who had the temerity to say to God, “Am I my brother’s keeper?” (Bereshit 4:9), had to be reminded of the lesson of the letter “vav” every day for the rest of his life.  Not only did he need a reminder regarding his connection to others, it had to be made clear that he was, in fact, his brother’s keeper.

And, finally, Adam was created on “yom vav.”  This is not to be understood only as “the sixth day” but, perhaps more profoundly, as “and day.” Already at the dawn of creation, the first human being was taught that as the universe unfolds with him at the center, it will never be about him alone – it will always be about him “and” the other.

Indeed, in a real sense, all Jews must consider themselves as bound by the lesson of the letter “vav,” each one standing not alone, but committed to those who exist beyond and separate from themselves.

Those wonderful hooks that held together the structure of the Mishkan represent the hooks that connect Jews all over the world to the State of Israel. Our support of the Religious Zionist Slate in the World Zionist Congress elections is crucial because this party will advocate for the continued growth and support of Torah and Zionist education worldwide, the promotion of Aliyah to Israel, and the development of religious Zionist outreach programming worldwide, programs that we support and are close to our hearts. We, Religious Zionists in America, will have a voice in deciding Israel’s future by casting votes for the delegates who will best represent our views.

With the lesson of the vavin and the letter vav at the top of the amud of our communal priorities, we will have a chance to impact the State of Israel and our own Jewish future.

The need is urgent. The time is now.  It is time to connect.

About the Author
Rabbi Dr. Jacob J. Schacter is the University Professor of Jewish History and Jewish Thought at Yeshiva University and Senior Scholar at the University's Center for the Jewish Future. Rabbi Schacter holds a PhD in Near Eastern languages from Harvard University and received rabbinic ordination from Mesivta Torah Vodaath. He presently serves as a faculty member for both the Wexner Foundation and the Wexner Heritage Foundation.
Comments