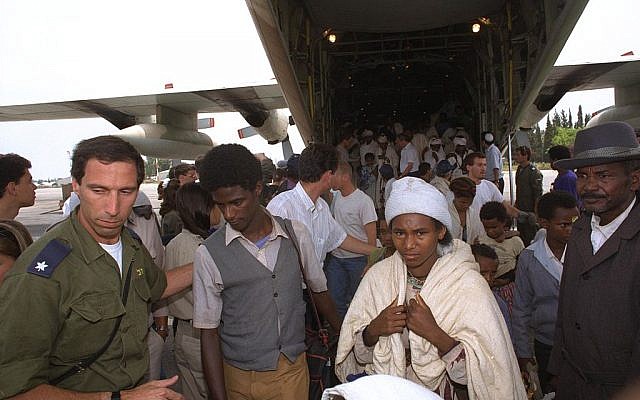 An IDF officer helps Ethiopian immigrants out of a Hercules jet during 'Operation Solomon', May 25, 1991 (Tsvika Israeli / GPO)

The images from Operation Solomon, the 36 hour airlift that brought 14,324 Ethiopian Jews home to Israel in 1991, are the stuff of legend.

The quiet dignity of the white-clad Beta Yisrael, boarding the planes. One jet so full of passengers that a Guiness record was set. Three babies born en route. Euphoric pilots and crew, watching a modern-day Exodus unfold before their eyes. Long separated families reunited at last in Israel. 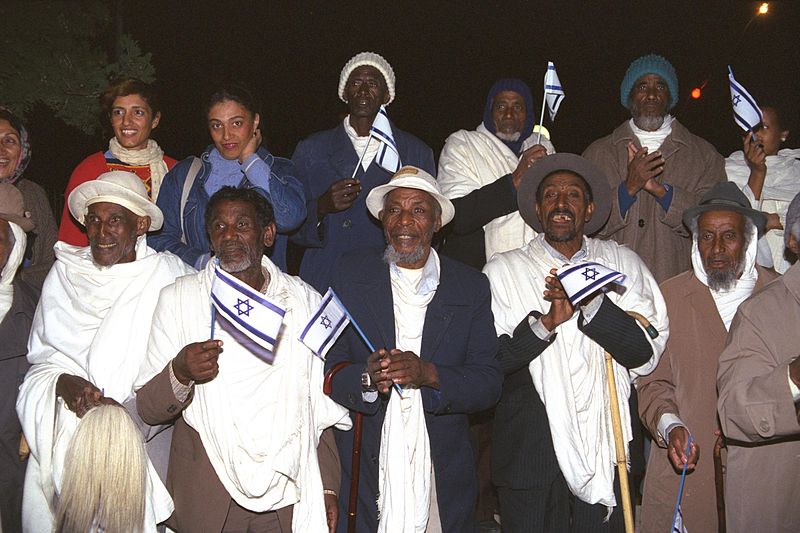 But behind the images there is a back story.

Before there could be an Operation Solomon, there had to be a negotiation to enable the Beta Yisrael to leave Ethiopia.

This week, as we lay to rest the 41st President of the United States, let’s take a moment to remember that fact.

But, there’s another important piece to this back story. President Bush appointed an emissary to engage in the negotiations on his behalf.

That emissary was former Senator Rudy Boschwitz of Minnesota, a state that’s barely on the radar for most Israelis or Ethiopians.

One of the highlights of the years I taught Hebrew at a Jewish day school was teaching my 8th graders about the Beta Yisrael- their history, culture, unique form of Judaism, and the amazing operations that brought them to Israel. The highlight of that unit each year was the day Senator Boschwitz came to speak to the students about Operation Solomon.

“What a difference fifty years makes,” was the way Senator Boschwitz framed the talk. His family survived the Holocaust because they fled Germany for the United States in 1933. Boschwitz was just three years old. By 1941, there was nowhere for the Europe’s defenseless Jews to flee and no one to help them.

Fifty years later, in 1991, a Jewish Minnesotan, sent by the American President, would negotiate for the rescue of endangered Ethiopian Jews.

The students were fascinated to learn what is was like to negotiate with a dictator in the midst of a civil war. They giggled when the tall, stately Senator showed them how he was required to sit in a very low, soft chair, so that the Ethiopian leader would be higher than him. When the students grasped the enormity of what had happened– black people were taken from Africa not to be enslaved or exploited, but as an act of care and love, the ingathering of Jews to our homeland–they were proud. That the president sent a Jewish American to negotiate the rescue made them even prouder. 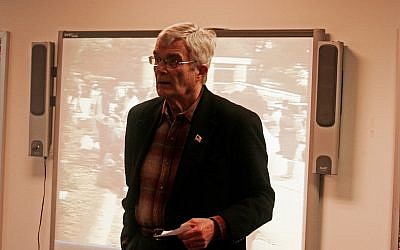 Yes, what a difference 50 years makes.

The eulogies are pouring in this week for President George H.W. Bush. This is a man who lived an extraordinary, consequential life — President, Vice-President, CIA Director, ambassador to China, and more. But it’s the adjectives that are gripping my attention: kind, humble, gracious, generous, and compassionate.

I had the honor of meeting this president in 2000, when his son, George W. Bush, was running for president.

Senator Boschwitz had organized a high-level fundraiser at which Bush Sr. would appear. It was to be held at one of the magnificent mansions on Lake Minnetonka, in suburban Minneapolis. Knowing how much we admired the former president, Senator Boschwitz invited my husband and me to simply attend. We jumped at the chance!

I’ll never forget the moment when President Bush entered the room. He strode in tall and straight, with the easy bearing of a man much younger than 76.

He greeted people warmly, and then addressed the crowd.

I wondered what story this former president would tell about himself. Maybe he’d drop a few world leaders names, mention the Oval Office, or hint at the intrigue of running the CIA.

He did none of those things. Instead he said, “Let me tell you about the last time I was on Lake Minnetonka.”

He took us back to the 18 year-old George Bush, a navy pilot in training, who had a few hours layover in Minneapolis.

His father had an old friend in the area— Mr. Pillsbury, of the legendary Minneapolis milling family.  Mr. Pillsbury sent a car to pick up the young pilot and bring him back to the Pillsbury’s Lake Minnetonka estate.

Mr. Pillsbury welcomed Bush and then led him to the bar. “What are you drinking, son?” he asked.

Bush was taken aback. “I was just an 18 year-old kid,” he said to us with a sheepish grin. “I didn’t know what to say. So I just smiled and said, ‘I’ll have whatever you’re having, sir!”

The room erupted in warm laughter.

To have lived such an accomplished life, to stand in a room full of high-level donors (except us), and to tell the story of your 18 year-old unpolished self–if that’s not humility, I don’t know what is.

Reflecting on the passing of President Bush, Senator Boschwitz said, “All the nice things they’re saying today are true, but they were evident fifty years ago when I first met him.”

A great man left us this week. May his memory be an eternal blessing. 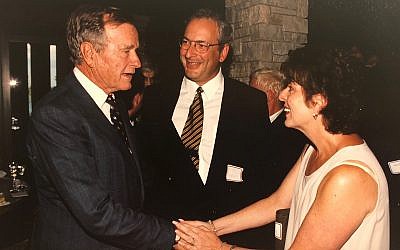