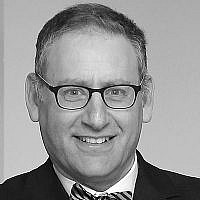 The Blogs
Steve Spear
Apply for a Blog
Please note that the posts on The Blogs are contributed by third parties. The opinions, facts and any media content in them are presented solely by the authors, and neither The Times of Israel nor its partners assume any responsibility for them. Please contact us in case of abuse. In case of abuse,
Report this post.

Wednesday night, Jews around the world will sit for this year’s seder, and within just a minutes of repeating the event’s order, making kiddish, and going through a few quick almost cursory milestones—wash the hands, eat the greens, get the kid to ask some questions—“Haha, Zeide, there are no children at the table; you ask the questions!”, they’ll reunite with the rabbis of B’nei Brak in what is arguably the most studied portion of Mishna. After all, of all Jewish obligations, the seder is the most held too—more so than even requisite attendance on Rosh Hashanah and Yom Kipper.

Yet, even in the Haggadah’s crib note short hand, there’re hints that this is not such simple case. Even that this is just an inspiration that our seder should have such kavana about the maggid seems a bit of an easy explanation. “Oh, the Tannaim were up all night. Shlomo. Don’t doze off before the benching!”

After all, there’s the urgency of the students at the entrance. Did the Rabbis so lose track of time they didn’t know to say the shema? C’mon. They’re not middle schoolers. And there’s Rabbi Elazer of Azaryah who’s expressing some existential crisis about being like 70 but not being 70?

What’s happening here? These Rabbis are the leadership generation immediately after the destruction of the Temple. That tangible fixture of national life is gone. In addition to losing the daily, weekly, monthly, and annual ritualistic metronomes that the Temple’s routines provided, they’ve lost all sorts of autonomy—political, economic—trying to figure out—under duress and with no certainty about the time available to do so—how to maintain national continuity in the absence of the institutions by which most nations defined themselves. Think Jor-El and the elders of Krypton knowing their world is about to end and desperately trying to conceive some plan for maintaining their peoplehood when everything by which they might have defined their peoplehood is about to disappear. “Lara, shove what you can into the tevah with Jor-el before we have to launch.”

So what are the Tanaaim doing that’s recorded in the Mishna? They’re racing trying to capture “the code” by which life was governed, brain storming on how to make the same code apply when the very structure around which much of the code applied no longer exists. They start with what’s frequent—the twice daily saying of the shema.

When do we say it in the morning? When do we say it in the evening? In the evening, oh, there were routines in the Temple to which the night saying was attached. Rabbotei! There is no Temple. When does the typical person coming in from the field, when does he say Shema in the evening? What’s the overlap, the equivalence, the commonality of his ordinary routines with the sanctified ones of the Temple? And, if now there’s equivalence, doesn’t that make the ordinary sanctified too?

And so, when they reference the time to recount the Exodus, are they really getting into the nitty gritty of Pesach? Likely not. After all, those capturings of ritual are in their own masechet. One could argue an alternative. They’re looking for another reference point for disruptive and even traumatic change—the leaving from Egypt? You might question that choice of word. Traumatic? Well, think about it. As lousy as it was, slavery was the known. Freedom, exodus, avodah… Those’re all unknowns, different things to do in a different place, none of which had ever been experienced. The thing they did know, the thing that was familiar, that was servitude. And as bad as its routines and habits were, they were the known ones. And as we’ve all experienced and seen—habits of mind even more than habits of body, even pathological ones are awfully resistant to change.

So, here we have the rabbis of B’nei Brak, back for our annual reunion, but with a twist. This year, we’re like them. Their world has been ruptured. They’re trying to simultaneously preserve and invent to keep their community and their legacy intact. And aren’t we too? Until one month ago, how many of us considered hearing shir ha’shirim the day after Shabbat chol ha’moed Pesach, and doing it by Zoom?
You know. We’re admonished to treat the yitziat Mitzrayim not as someone elese’ history but as personal recollection. As if we had lived it ourselves. Hard to see the obvious connection most years. When Yocheved and Miriam were packing to depart, did they have to worry about what they would wear to the tea-room? Were Aharon and his boys picking out a sharp looking suit that would still be comfortable after the last dish at the seder meal? Who know one, who know two, who knows three…who knows 13? “13? I know 13. That’s the number of types of chicken Mama served tonight.”

But this year? Our routines, many of them are shattered. We’re trying to invent new ones not just to replace, but to protect.

And there’s that other element which I’ve never processed. That last night in Egype. That last plague in Egypt. The Jews are huddled—their homes had to be dreggy enough to only allow huddling—inside waiting for a … well, waiting for something they couldn’t foresee nor understand.

They’re just waiting. And outside? Outside, there’s death.

Maybe when we’ve sat in our sartorial splendor at a table arrayed with culinary finery, we’ve imagined them similarly accoutremented. Thinking about it now? I don’t see it. Their world is being torn asunder. Likely, they were terrified about the immediate right now and about what they’ll be doing immediately right after. The good news seems to be that this year we do have opportunity to experience the recounting as it it’s actually our story, not someone else’s, somewhere else, some other time.

One last thought. When those rabbis were in B’nei Brak, the wolf at the door—did the some know that their future was martyrdom, they found consolation and inspiration in looking to the Egypt departure for reassurance that it’ll all work out.

We’re even more fortunate. Not only can we look to that example, we can look to them as one, too. In the face of cataclysm, they invented Rabbinic Judaism, they created code for a people that was portable, replicable, and incredibly resilient to challenge, and they democratized the sanctity of priesthood to everyone about everything. They gave us the tools to use by which we navigate today.

About the Author
Dr. Steve Spear DBA MS MS is Principal at HVE LLC, founder of See to Solve, and Senior Lecturer at MIT. He, his wife Miriam, who is an architect with several synagogues and mikvot in her portfolio, live in Brookline with their children.
Related Topics
Related Posts
Comments