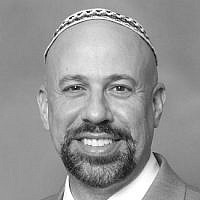 The Blogs
Barry L. Schwartz
Apply for a Blog
Advertisement
Please note that the posts on The Blogs are contributed by third parties. The opinions, facts and any media content in them are presented solely by the authors, and neither The Times of Israel nor its partners assume any responsibility for them. Please contact us in case of abuse. In case of abuse,
Report this post.

Having just celebrates Israel’s 66th birthday this week, here is my list of the greatest Zionists. among so many deserving:

1. Theodore Herzl– Visionary and a genius for political advocacy and organizing

2. Eliezer Ben Yehudah– Reviver of Hebrew as a spoken language

7.  Moshe Dayan– swashbuckling general and epitome of the new Israeli

8. Menachem Begin– Right-wing Prime Minster who made peace with Egypt

9. Abba Eban– Urbane diplomat and voice of Israel to the world

About the Author
Barry L. Schwartz is director of The Jewish Publication Society in Philadelphia and rabbi of Congregation Adas Emuno in Leonia, New Jersey. He is the author, most recently, of "Judaism's Great Debates: Timeless Controversies from Abraham to Herzl" (2012).
Comments