In “The War on Women in Israel“, Dr. Elana Maryles Sztokman asks why Israel’s government has constantly sided with an extreme version of Judaism.

An outsider reading this extensively researched review of the way women are treated in the modern Jewish State might think that the author was describing Alabama of the 1950s. With women segregated to the back of certain public bus lines; prevented from singing in the Knesset and banned from some official ceremonies; and forbidden to pray according to their beliefs at Judaism’s holiest site; it would seem that Israeli society is suffering from a severe case of gender discrimination.

“The cold, hard reality facing woman in Israel today is that while Israel has made certain strides for women’s rights, it has not achieved the mission for which it was created. It is not equal for all, regardless of gender,” Sztokman says. But what is more alarming, in her opinion, is that “there is a growing faction of Israelis who are threatening not only equal rights for women, but also their fundamental freedoms and their presence in society.”

What follows is a report from the battlefield, detailing the war against women in the Israeli army, on the buses, in the courts, and on the streets of the country. The combatants on one side of the conflict are, initially, religious feminists. Their enemy is not just the ultra-Orthodox extremists who abuse them verbally and physically; the problem, the author states, is much greater. Sztokman’s book sets out to tell how these feminists, and their allies, are “protecting the world from the spread of religious extremism.” 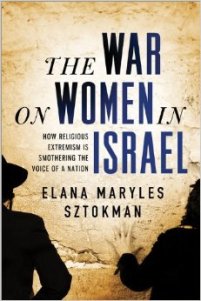 The War on Women in Israel (Sourcebooks, September 2014), has a lot of ground to cover in its war reporting, and Sztokman lives up to the task. Her exhaustive study is based on extensive interviews and original research, quoting a wide range of activists, scholars, rabbis, and political leaders. Court cases and decisions are faithfully reported; footnotes and media sources are meticulously listed.

Israel’s gender discrimination, according to the author, is due to “a system in which ultra-Orthodox groups are given free rein in politics and education, receive enormous public budgets for their institutions regardless of what is taught in them… The message is clear,” the author says, “ultra-Orthodox groups have disproportionate power over Israeli society.”

Sztokman is quick to lay the blame on successive secular governments that have gone too far in their acceptance of radical Haredi demands, demands not based at all on Halacha. “The story of these rising tensions between religion and gender in Israel has more to do with money and power than with God,” she states.

There is hope, though, as the book correctly points out. This is when Orthodox women partner with secular feminist activists and proponents of religious pluralism. “The war on women in Israel is a war on women – and men – everywhere,” Sztokman stresses.

People everywhere should care about who wins this war, she argues, “because the whole world is threatened by religious extremism, and it will jeopardize our own freedoms too if we allow it to continue unchecked.”

Headlines about cases of gender discrimination continue to appear in the Israeli media on a daily basis – the war is ongoing. Along with all the facts reported in this thorough study, Sztokman’s single-minded dedication to fight back against gender-based injustices in Israeli society is a battle cry, calling on citizens everywhere to demand that their leaders refuse to give in to religious extremism.

Dr. Elana Maryles Sztokman is the former Executive Director of JOFA, the Jewish Orthodox Feminist Alliance, and a leading author and activist on the issue of religious feminism in Jewish life. Her first book The Men’s Section: Orthodox Jewish Men in an Egalitarian World, won the 2012 National Jewish Book Council Award for Women’s Studies. Originally from Brooklyn, New York, and a graduate of the Yeshiva of Flatbush, Sztokman moved to Israel in 1993 and today lives in Modi’in, Israel with her family.