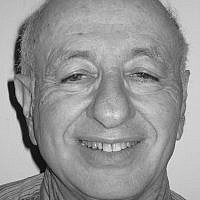 The Blogs
Abba Engelberg
Apply for a Blog
Advertisement
Please note that the posts on The Blogs are contributed by third parties. The opinions, facts and any media content in them are presented solely by the authors, and neither The Times of Israel nor its partners assume any responsibility for them. Please contact us in case of abuse. In case of abuse,
Report this post.

The Biblical book of II Kings tells the story of a destitute widow who came to Elisha when her creditors were about to take away her children to sell into slavery. Elisha asked her if she had anything at all in her house, and she said that she had only one flask of oil. He told her to borrow as many pots and pans as possible from the neighbors, and to pour oil from the flask into them. Miraculously, the flow continued until there were no more empty vessels.

Rav Aharon Soloveitchik referred to this miracle in a pre-Hanukkah lesson. He used it to question the uniqueness of the oil miracle that is frequently cited as the source for the holiday of Hanukkah. Certainly the miracle at the time of Elisha was greater in terms of the amount of oil created ex nihilo, yet no holiday commemorates that miracle, so why do we base Hanukkah on a relatively minor miracle?

To answer this question, one may note that there exists a second reason for celebrating Hanukkah, namely to commemorate the military victory of the Maccabees over the Syrian-Greeks. In the special Al ha-Nisim prayer for Hanukkah, the oil miracle is not mentioned at all. Instead, we thank G-d for bringing us a victory of great magnitude.

Let us turn the clock back to 700 BCE. Sennacherib has destroyed the Israelite kingdom and exiled the ten tribes. Jerusalem is surrounded by an army of half a million Assyrian soldiers. King Hezekiah, in desperation, surrenders all of the Temple’s silver and even the gold plating on the Temple’s doors, but it is not enough to appease Sennacherib. After indulging his soldiers with a good night’s sleep, he will decimate the city with its Holy Temple. But overnight an angel visits his camp and smites 185,000 of the Assyrian soldiers. Sennacherib flees in disgrace, and shortly afterwards is assassinated by two of his sons. Even Herodotus describes the routing of the Assyrian army, although he ascribes it to a plague of mice. But even that doesn’t take away from its manifestation of the Divine, since the miracle is in the timing.

Once again, the military victory of the Maccabees, as significant as it was, would seem to pale in comparison with the miraculous defeat of Sennacherib’s army, yet our yearly routine makes no mention at all of the latter event.

In answer to these questions, Rav Aharon described the first battle fought by the Maccabees, as related in Sefer Hamaccabim. It occurred on the Sabbath and ended in an ignominious defeat of the Jews, who, having been brought up to be religious, refused to even touch their weapons, let alone carry them more than four cubits, as they were considered to be muktze (forbidden to be moved on the Sabbath). During the week, Mattathias, father of Judah the Maccabee, called an emergency meeting, in which he recalled a forgotten ruling that it is permitted (and even required) to desecrate a single Sabbath if doing so allows you to remain alive and thus able to observe many Sabbaths in the future. However, there was a splinter group, called Chassidim in the Book of the Maccabees, which disputed Mattathias’s ruling, and even cast aspersions on his religiosity. They refused to join the fight on the Sabbath, and, for good measure, during the week as well.

There was a second group which also refused to join Judah the Maccabee’s army, the Hellenists, but not because they were worried about desecrating the Sabbath. Rather, they actually identified with the enemy, and some even joined the Greek ranks.

The miracle of the oil was G-d’s way of showing both the Chassidim and the Hellenists that Mattathias had in fact made the right decision. To the Chassidim, G-d was clarifying that it is permitted to desecrate Sabbath when faced with a life-threatening situation, while to the Hellenists G-d was stressing that it is fine to be open to Western culture, but in a spiritually life-threatening situation it is imperative to fight those who wish to obliterate the essence of Judaism. Extremists to the right and left have been known to be quite stubborn, so it was not definite that even G-d’s intervention would be enough to change their minds.

It is for this reason that when relating the story of Hanukkah, the Talmud tells us that the next year, these days were designated as holidays for praise and thanksgiving. The religious establishment had to wait a year to see whether the factions at the edges of the political spectrum would accept the message. And miracle of miracles – the next year, all segments of the Jewish nation joined in celebrating Hanukkah. The nation had not been united to this extent since the giving of the Torah, where Rashi tells us that all Israel camped in front of the mountain as one man of one heart.

I believe that the biggest challenge facing Israel during the next fifty years is to strengthen our fraternal bonds. The government should tell the Haredim: “We honor and respect you, but we beg you not to secede from the Jewish nation. We realize that you don’t consider most Jews to be as devout as you would like them to be, but please recall that even the incense which was burned in the holy Temple contained one foul-smelling spice. And each Yom Kippur we proclaim before G-d unapologetically that we are praying with sinners.”

Likewise, the secular citizens of this country should be told: “If you have any intention of preserving your Jewish or even Israeli identity, you must imbue yourself and your children with Jewish culture and values, if not religion. Otherwise you will assimilate and gradually disappear into Western civilization.”

On the basis of these insights, let us all start the process of strengthening the unity of the Jewish nation by each of us extending our love, friendship, and knowledge to our fellow Jews.

About the Author
Abba Engelberg served as professor at Jerusalem College of Technology (JCT) for 40 years, where he founded and headed the women’s division. He is presently the dean of the International Program at JCT. He was a reserve chaplain in the United States Air Force where he achieved the rank of colonel. He is the father of four sons and lives in Jerusalem with his wife and has authored books and articles in the areas of science and religion. Abba Engelberg graduated from Telshe Yeshiva (valedictorian) and Yeshiva University (cum laude), where he received rabbinical ordination. He holds a Ph.D. from NYU in operations research.
Related Topics
Related Posts
Comments