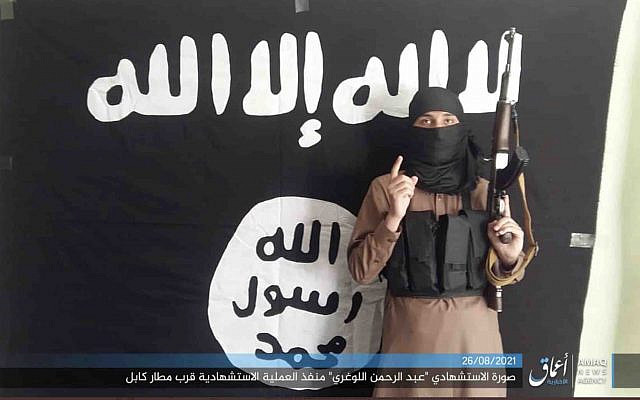 ISKP taking credit for the explosion at Kabul airport through their Amak news. (Screenshot tweeted by Adityarajkaul, Twitter)

“If there is a settlement with the Taliban, and they become part of the government, Pakistan has the replacement for them ready. They will continue this war in Afghanistan in the name of the Islamic State”. These were the prescient words of Abdul Rahim Muslimdost, who was the first head of the Islamic State Khorasan Province (ISKP), the group that is now being billed as the biggest threat to international security. The suicide attack on the Kabul airport was perfectly timed to further the agenda of rehabilitating the Taliban’s image, making them seem responsible, even moderate. There is an attempt to change the narrative globally trying to make the Taliban look moderate and responsible while obscuring Pakistan’s direct role in the establishment and growth of the ISKP as well as its indirect role through the Haqqani network. The Department of State has stated in one of its recent press conferences that it considers the Taliban and the Haqqani network (still on the terrorism list) as two separate entities, despite the Haqqani’s taking responsibilities for peace and government negotiations and also the onus of security in Kabul.

Ever since the ISKP emerged in 2014, it has been quite apparent that Pakistan has has a strong role in nurturing it. Analysts have been rather clear that no radical Islamic group could operate in South Asia without the direct support of the Inter Services Intelligence (ISI). The Brooking Institute justified the Trump administrations decision to suspend aid to Pakistan due to its direct support of terrorist groups. Pakistan’s strategy was quite simple: inside Pakistan, they crushed any association with the Islamic State that had been announced in 2014 by the self-proclaimed Caliph Abu Bakr al Baghdadi; but they encouraged, even supported, the establishment of the Islamic State Khorasan Province in Afghanistan.

Tehrik-e-Taliban commanders split from the Afghan Taliban movement due to a succession war in TTP. The TTP had been led since its inception by the Mehsuds, the appointment of Fazlullah as the leader was not acceptable to many commanders. Both because of tribal rivalries and aspirations, and because of differences in policy and strategy, some of the senior commanders decided to break away from the Taliban and swear allegiance (Bay’t) to the Islamic State. According to Muslimdost, this was ISI strategy which wanted to redirect the militancy that targeted Pakistan to shift to Afghanistan.

The majority of ISKP – 80-90% – is constituted by Afghan and Pakistan Taliban. Most of the governors of the Khorasan Wilayat – ISKP top commanders – have been Pakistani. These include Muslimdost, Hafiz Saeed Khan and Aslam Farooqi. Italian expert Prof. Antonio Giustozzi, a visiting professor at King’s college, in his book “The Islamic State in Khorasan: Afghanistan, Pakistan and the New Central Asian Jihad”  states that Farooqi replaced the Afghan Umar Khorasani as part of a deal brokered by the Haqqani Network with Pakistan. The ISI wanted to exercise direct influence in ISKP and did not want them to conduct any operations against Pakistan’s security forces. In exchange, they were offered safe haven inside Pakistan.

Giustozzi has detailed the links that connect the ISKP to the Haqqani Network and to ISI and Pakistan. Successive UN Security Council reports, corroborate this thesis. A UNSC report in 2020 claimed “most attacks claimed by ISIL-K demonstrated some degree of involvement, facilitation, or the provision of technical assistance by the Haqqani Network”. Furthermore, they state that “ISIL-K lacked the capability to launch complex attacks in Kabul on its own and took responsibility for operations that had, possibly, been carried out by the Haqqani Network. Notably, the tactical autonomy of the Haqqani Network in pursuing Taliban’s goals enables them to support operations, which undermine the control and credibility of the Government of Afghanistan. Likewise, operations resulting in civilian causalities allow Taliban deniability whereas ISIL-K is willing to claim responsibility to demonstrate capability and relevance”.

Both Taliban and ISKP have had a historical problem with the Shia and Hazara minorities, including the brutal Taliban led Hazara genocide in Mazar-e-Sharif in 1998. But as the Taliban seek Iran’s support, their approach to the Shia’s and Hazara’s has moderated . The ISKP has no such compulsions.

In an interview to Wall Street Journal, the former head of ISKP, Abu Umar Khorani, stated that “the attack by the Islamic State often benefited the Taliban, despite the enmity between the groups”. One such operation was the Jalalabad jailbreak which was executed by ISKP.

The Afghan security forces discovered after a raid on an ISKP-Haqqani Network, cell that a senior ISKP operative Salahuddin, who was heading the Kabul division, and was in charge of kidnappings, bomb attacks, assassination operations was also associated with the Haqqani Network.

Earlier this year, another UNSC report stated that Aslam Farooqi’s successor Shahab al-Muhajir  (Sanaullah) had been a mid-level commander in the Haqqani Network and retained his links with his parent organisation. According to the same report, most member states of the UN reported “tactical or commander-level collaboration between ISIL-K and the Haqqani Network”. Pakistan’s links to the Haqqani network have been clearly documented by several think tanks and intelligence agencies.

The former Afghan Vice-President Amrullah Saleh had said in 2018 that “ISIS or Da’esh in Afghanistan is fake. The sleeping suicide cells of the Taliban and Haqqani group are sold for specific targets and the sellers let Da’esh (ISKP) take responsibility. Thus, Pakistan’s ISI and the Taliban are responsible for the ongoing carnage in the name of ISIS”.

ISKP’s engagement is not limited to Afghanistan. A former Lashkar-e-Toiba commander Huzaifa al-Bakistani who was involved in recruiting and radicalising young men in Kashmir was killed in a drone strike in Eastern Afghanistan in 2019. Al-Bakistani had joined the ISKP, which follows the same Salafi theology as the Pakistan based terrorist group Lashkar-e-Toiba. There are several such cases of militant organisations which have strong connections to the Haqqani network and eventually to extremist activities in all of South Asia.

After the US retreat from Kabul it is the Haqqani’s that control the city. While the Taliban’s establishment of an Islamic Emirate strengthens the ISI’s control over Afghanistan it also risks a blowback on Pakistan’s own democracy if the various extremist Pashtun factions unite and decide that it is time to establish a Pashtun nation beyond the borders of Afghanistan. Until then, South Asia and the world is hostage to another cold war relic, the ISI.