A look at the record of the Donald Trump administration during the four years of the presidency of the United States of America in the domestic and foreign arenas shows that despite all the adventures he was exposed to, he performed positively and beyond acceptance, so that the outcome of his actions shortly The 1,500 days of American rule are tangible and visible not only to Americans but to most parts of the world.

During this time, Trump had no pro-government media, and even Fox News, which was said to be his supporter, sometimes did not fully reflect his administration’s achievements. 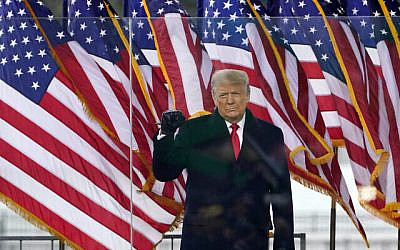 Although post-Trump administrations’ performance in the United States cannot be estimated and evaluated, it is undoubtedly possible that, in a reasonably fair assessment, the four-year term of the Trump administration could be a golden age in terms of economic prosperity and improving welfare within the United States. He called the crisis-stricken sections and disciplines of rebellious dictators abroad.

Trump’s economic performance in the United States
Rather than being a political and partisan figure, Donald Trump is a man with a strong economic background who worked in economics for many years before entering the White House. With the Oder coming to power in the United States in January 2017, much of the United States’ economic turmoil gradually subsided. He was able to create purposeful financial discipline in the American economic structure, the tangible result of improving the welfare of millions of American households. When Trump took office in 2017, the median income per US household was $ 62,898, but that income grew by $ 6,000 during the Trump administration year to 68,703, a staggering growth.

Amazing employment growth
In terms of employment, the United States situation coincided with Trump’s inauguration in January 2017, with Treasury and Federal Reserve officials declaring that the economy was in full work and that further improvements could further push the US economy. Driven by its steady capacity, but under Trump, it happened that there were four jobs for every American and the American workforce had the power to choose. Most American economists believe that the positive economic transformation under Trump has been so sustained that Biden has maintained a policy of boosting growth under Trump.

Fulfilling promises
Politicians are said to come with false promises and leave power without doing anything, but this does not seem to be Trump’s case. From the day he took office, he quickly returned to his campaign promises and revised the slogans he had given to the Americans to put them into practice. One of his promises was to achieve 3% economic growth in the first year of his presidency, which was fulfilled three months before his presidency’s anniversary, a promise that was fulfilled in the same year that terrible storms in the United States caused much damage. He had brought the growth of more than 3 percent in the first year, while Obama, in the first year of his second term, could hardly reach the growth rate of 2 percent. “Laura Ingraham,” a well-known American presenter and political writer simultaneously in an interview with Fox News Referring to Trump’s economic success, he said: “Trump pushed the US economy forward.

His next promise was a tax cut, which he realized with Congress’s help, and in a short time led to the growth of investment, which many financiers hailed as a hero. Trump’s recklessness about tax cuts and trade deregulation has led to unprecedented employment growth and the strangest employment situation in the United States; This means that four jobs are available for each job applicant!

Two critical economic achievements inside
The growth of stocks and the stock market was achieved during the Trump era and reached a historical record. However, Trump’s success train seemed to have no intention of stopping and was continually performing strange masterpieces.

In a move, he reinstated workers who had lost their jobs during the Great Depression between 2007 and 2009. Official statistics in the United States show that these unemployed workers have returned to the labor market. The Labor Office issued a report confirming this.

The overthrow of ISIS
The Islamic State of Iraq and the Levant (ISIL), nicknamed ISIS, led by Abu Bakr al-Baghdadi, has expanded its violence with brutal killings, with the Iranian government claiming to be fighting the group in Syria. The day was getting stronger. With the Russians’ arrival in Syria, it seemed that the Iranian and Russian regimes were wasting time. Some reports even indicated that Qassem Soleimani was trying to divert the Syrian people’s uprising against Bashar al-Assad by strengthening the mercenary fighters and distributing them throughout Syria. The Trump administration ended their rule by attacking ISIS headquarters and shortly afterwards assassinated Abu Bakr al-Baghdadi, the evil group leader.

Killing of Soleimani
The removal of Qassem Soleimani, the world’s number one terrorist after al-Baghdadi, was another of Trump’s international actions that saved the lives of many innocent people. 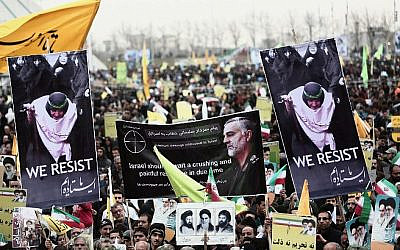 Iranian demonstrators hold a portrait of Maj. Gen. Qassem Soleimani, commander of the Quds Force in the Iranian Revolutionary Guards and a central figure in the violent spread of Iran’s revolution. Photo taken in Tehran’s Azadi Square, (Behrouz Mehri/AFP)

Soleimani was the father of roadside bombs that killed or maimed hundreds of American and Western troops in the Middle East. While Soleimani was considering a new plan to kill American soldiers and attack Western interests in the Middle East, the terrorist was assassinated on the morning of winter 2020 on President Trump’s orders.
Trump’s move to oust Soleimani severely limited the scope of the Islamic Republic’s atrocities and significantly reduced the number of Americans and Western troops killed in the Middle East. He said he did so to protect American interests.

Peace of Arabs and Israel
Establishing peace between the Arabs and Israel was another step taken during Trump’s presidency. Several Arab countries, including the United Arab Emirates, Bahrain, and Sudan, came to the negotiating table with Israel and established formal diplomatic relations with that country. 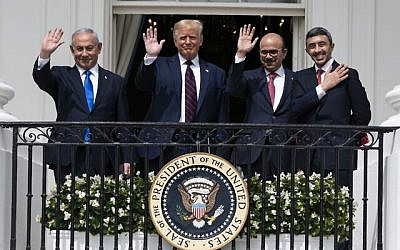 FILE – In this Tuesday, Sept. 15, 2020 file photo, Israeli Prime Minister Benjamin Netanyahu, left, U.S. President Donald Trump, Bahrain Foreign Minister Khalid bin Ahmed Al Khalifa and United Arab Emirates Foreign Minister Abdullah bin Zayed al-Nahyan pose for a photo on the Blue Room Balcony after signing the Abraham Accords during a ceremony on the South Lawn of the White House in Washington. Saudi Arabia insists officially that there can be no formal ties with Israel before Palestinian statehood is achieved, but state-backed media and clerics have softened their tone toward Jews and there has been no official condemnation or criticism of the deals signed by the UAE or Bahrain with Israel. (AP Photo/Alex Brandon, File)

And several other countries, including Oman, Saudi Arabia, Qatar, Turkey, and the Palestinian Authority, have expressed readiness to join the wave of peace.

Talks with the Taliban
Talks with the Taliban were another peaceful move by the Trump administration that severely curtailed the group’s atrocities in Afghanistan. Although evidence suggests that the Islamic Republic regime provided ammunition for the militant group to kill Americans, the Trump administration’s active diplomacy has shown that violent groups can also be brought to the negotiating table, and efforts can be made tame them. 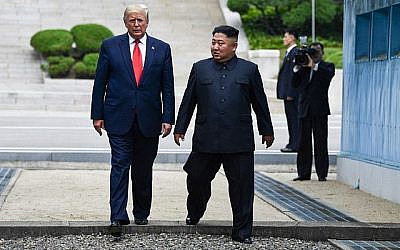 North Korea’s leader Kim Jong Un, right, and US President Donald Trump cross south of the Military Demarcation Line that divides North and South Korea, after Trump briefly stepped over to the northern side, in the Joint Security Area (JSA) of Panmunjom in the Demilitarized zone (DMZ) on June 30, 2019. (Brendan Smialowski/AFP)

Although it is challenging to confront dictators, Trump met with the North Korean leader, and friendly letters were exchanged several times, unprecedented in the contemporary era.

Trump, the anti-war president
While it seems that Republican presidents in the United States have advocated a strictly military approach to dealing with dictators and expansionist governments, the Trump administration has pursued a gentle pressure policy without weapons. Trump even fired his national security adviser, John Bolton, who is pushing hard to attack Iran. In several stages, Trump tried to withdraw US troops from Syria and Afghanistan, much to his Western allies’ displeasure. The Trump administration also put maximum pressure on Iran, which led to the collapse of Iran’s economic system and cut off access to sufficient financial resources to develop evil in the Middle East.

Trump, independent of the joint mafia of the two official parties
Although considered a Republican, Donald Trump was politically independent of Washington-based power gangs. The traditional power and wealth mafia in Washington comprises individuals and groups from both the official Democratic and Republican parties who have also clashed with Trump in recent issues. These groups conduct their affairs through behind-the-scenes clashes and are subject to specific interactive methods independent of partisan tendencies. Trump was outraged by these people, and his independent political spirit in not sacrificing American interests to mafia gangs had made even some of his party members angry with him.

But; There was no vacuum for Trump’s thinking for the world.
The danger of a vacuum due to Trump’s absence in the world arena can lead to harmful and unforeseen consequences. The end of Trump’s presidency will at least pave the way for terrorist groups to move. The removal of pressure from these groups and the overflow of financial resources and appeasement of terrorist groups and terrorist countries may lead to the resumption of their activities or their expansion to attack the achievements of peace.

At its most optimistic, the continuation of the Trump administration’s achievements over the past four years could slow down, or at least maintain, the current axis of evil in the Middle East; otherwise, these groups and terrorist or authoritarian states could Find a chance to recover.

Trump is stepping down at a time when the threat of communist China’s expansionism and the regime’s growing influence in the United States and elsewhere remains strong, as China pursues a policy of colonizing the world through a cycle of defective, low-quality products. Steps towards the development of its communist policy; The danger that Trump felt and dealt with.

The Iranian regime’s risk of infiltrating Venezuela and strengthening its military forces in this neighboring US country is severe. If Iran’s financial resources are provided, it will establish paramilitary groups such as the popular mobilization and books in Venezuela and the United States through the Quds Force. The Iranian regime can do this by creating a hypothetical enemy in this country and then entering as a hero who defeats its hypothetical enemy, thus establishing what it did in Iraq. Pursue the political party to take control of the government and military organizations to suppress the opposition.