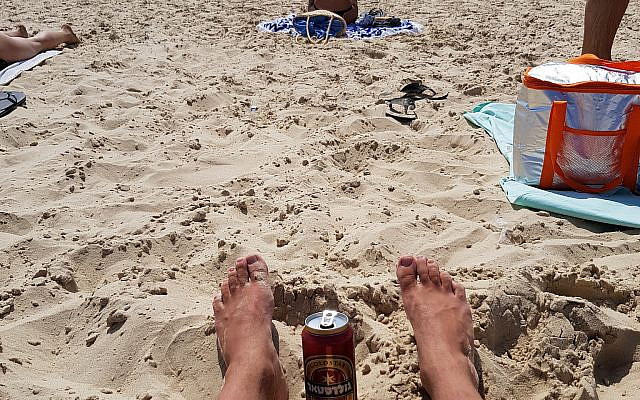 The beach. And Goldstar. That's me in a nutshell. (courtesy)

Here I am, crippled in bed due to winter vomiting virus. About 4500km away from Israel. And the Gaza rocket warning app is reminding me that I am spoiled. My life is so easy.

It’s so easy commenting on Israel, the Palestinians and everything around it. Sometimes though I remember myself that who am I to comment or debate Israel whatsoever?

I’m not affected by rockets, I don’t have to experience war, I don’t have to fear terror in the same way. My biggest concerns are the traffic outside my kids school and if the snow melting will flood my basement. That’s about it.

I don’t have to fear any of that. For me — personally, I just get sad every time the rocket alarm buzzes. 4, 5, 20, 48 rockets… Every few days. And every time my phone buzzes – I come to realize that it could have been me who had 5, 7 or 10 seconds to run to the shelter.

And I brace in fear each time – will it escalate further? How many people will die? Another round of blame-game from toothless politicians across the world? Everyone wants to have a saying or two about it.

But the more I think about it, this is where we are. You – the people affected by the rockets. Me – who can just watch in cry and dismay. They – the population of Gaza.

And the deeper I dig into my mind – the less I have to say about it. I don’t live in Sderot. I’m not in the reserve of the IDF. I vote. I have some business in Israel. I have a house or two there. But it’s there. Not here. I left Israel. When looking at myself – I just come to think about it more and more. Who am I to judge my fellow countrymen? Be they Muslims, Jews, Christians or secular. Or even atheists. Or anyone. It doesn’t matter. Who am I to comment on their reactions, feelings and way of life? Some chose it, others had no choice.

So whenever I see progress from the people of Israel I rejoice. Whenever I hear about a cease-fire, some kind of peace or at least status quo – I feel relieved.

Yes – you are right, status quo might be the best thing we ever achieve. As sad as it sounds and is – this has been going on forever. With its ups and downs. And that just makes me even less accredited in terms of commenting, discussing, judging or heckling any part of the spectrum.

I’m not the one who can change anything by writing here. Neither are anyone else I think – correct me if I’m wrong. I respect and admire this platform, it’s people, I have found new friends as well as discovering old ones. Which I’m truly grateful of.

My point is that only the people living in Israel, Gaza or the West Bank can have a saying of how they want to live their lives. And to be honest – the whole world has told those people (including me at times) how to live it. And they haven’t exactly made things any better, except for themselves perhaps.

All this stems from who I am. Whenever people ask me, I just get tired. I’m tired of the whole spectrum of questions. From the utmost positive comments to the most negative questions. And I’m even more tired of people who never even visited who keeps spamming the internet with whatever propaganda it might be. It’s like the whole world has gone bananas on Israel and the Palestinians and you have to choose. It’s black or white. All the freaking time. From all sides. Are you pro this or pro that? Why does someone do like that? Whose side are you on?

Let me tell you. I’m on that side that replies: “Go there, go see all of it. Not just Tel Aviv and Jerusalem. Travel the country for a month, couchsurf with locals – then come and have a saying of your experience. But not about the people there, because you are and will not be part of it until you move there permanently.”.

And this concerns all of you – evangelical Christians, blind ideological leftists, the BDS-movement, the European right-wing populists currently gaining ground. I have to say though – Israel did one thing so right by denying entry to the Sweden Democrats. A party founded by Waffen-SS veterans and who tries its best to pinkwash their ugly past.

That’s my only opinion about Israel – good job not letting them in. Kol Hakavod.